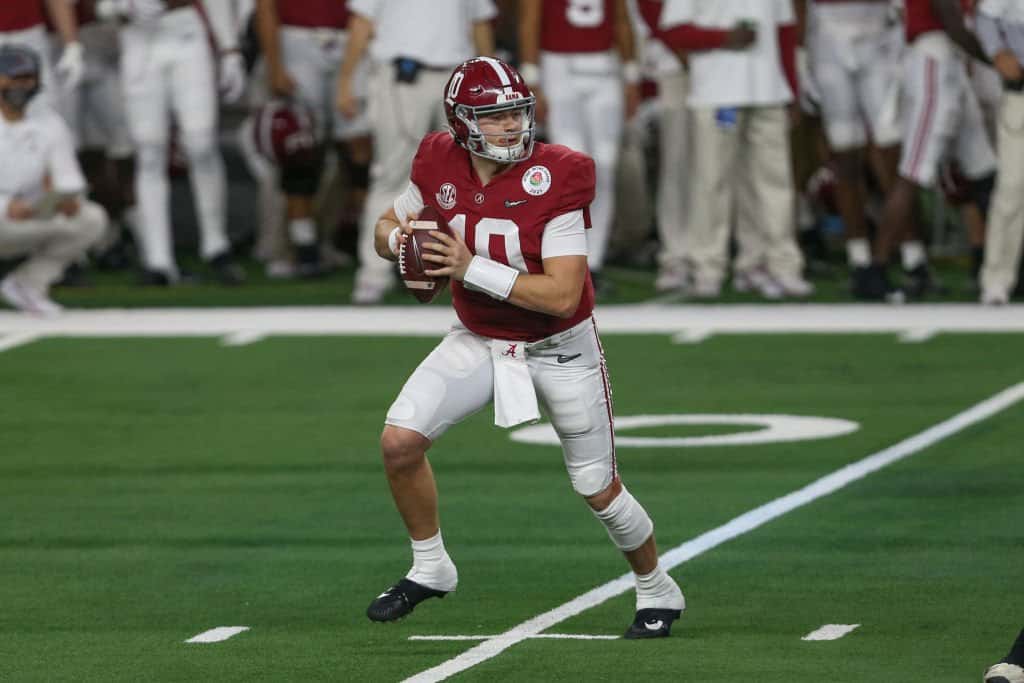 ARLINGTON, TX - JANUARY 01: Alabama Crimson Tide quarterback Mac Jones (10) drops back to pass during the College Football Playoff Semifinal Rose Bowl Game between Notre Dame and Alabama on January 1, 2021 at AT&T Stadium in Arlington, TX. (Photo by George Walker/Icon Sportswire via Getty Images)
What's in this article? Click to show
The Atlanta Falcons create a QB controversy in Daniel Jeremiah’s latest mock draft
Daniel Jeremiah has the Eagles selecting Kyle Pitts in his latest mock draft
The Patriots look to re-stock at cornerback with the 15th pick
The Dolphins go all-in on their offense
Kadarius Toney is the fourth WR off the board in Daniel Jeremiah’s Mock Draft
Want more 2021 NFL Draft prospect news? Want to do your own mock draft?

NFL Network’s Daniel Jeremiah released his latest 2021 NFL Mock Draft on Tuesday, with some of the selections raising eyebrows. Let’s take a look at the five most intriguing NFL Draft picks of Daniel Jeremiah’s most recent mock draft.

At pick four, the Falcons have plenty of options as to the direction they could take. However, Daniel Jeremiah has the Falcons taking Justin Fields with the fourth overall pick in his 2021 NFL Mock Draft. With Matt Ryan under contract for another three years, the Falcons would trigger an immediate quarterback controversy.

The Falcons do have a potential out in Ryan’s contract after the 2021 season. They would be left with $26.5 million in dead money, but it could save them significant cash over the final two years of the deal.

As for Fields, the selection is somewhat interesting. Many analysts, including Jeremiah himself, have Trey Lance above Fields. However, Jeremiah comments on the athleticism Fields can bring to the Falcons and how that could benefit the offense.

The question when it comes to Fields is not about talent for Atlanta. The big question becomes around whether the coaching staff is ready for the constant scrutiny that a QB controversy brings in training camp,

With rumors swirling around the future of Zach Ertz in Philadelphia, the selection of Kyle Pitts at number six would be fascinating. By selecting Pitts, the Eagles are re-committing to the style of offense they have been running over the past few years.

The style would continue to work around two primary tight ends as weapons in the passing game. It would also signal that the Eagles were simply just ready to move on from Ertz as opposed to looking to change their offensive style.

Questions have been raised about Kyle Pitts’ blocking ability

With the Eagles taking Pitts at six in Daniel Jeremiah’s latest 2021 NFL Mock Draft, they are looking to draft a complete package almost from his very first game. While few questions can be raised around Pitts’ ability as a receiver, his blocking comes under scrutiny.

The Florida tight end shows flashes of being a good blocker. However, inconsistency in that area is a serious concern. Spending this much draft capital on the position would suggest the Eagles see a player whose blocking they can develop.

The Eagles could arguably get a tight end of similar quality in the second round. Both Pat Freiermuth and Brevin Jordan expect to be available on Day 2.

Freiermuth is seen to have the advantage when it comes to blocking. However, Pitts is considered to be the more complete product. Jordan presents even more of a pass-catching dominant tight end than Pitts. In fact, Jordan is an extremely explosive weapon that could be available as late as the third round.

Investing a top-10 selection on a tight end is a big risk to take given the upside of the options available later.

The Patriots’ cornerback stocks are in an interesting situation. Stephon Gilmore has regularly been linked with a potential trade this season. Meanwhile, impressive young CB J.C. Jackson will be a restricted free agent.

There is a potential scenario where the Patriots could enter the 2021 season without two of their starting cornerbacks from the 2020 season. Therefore, from a needs standpoint, the CB position would make a lot of sense for the Patriots. That is exactly where Daniel Jeremiah has them focusing in his latest mock draft.

The shape of the cornerback position in this draft is beginning to clarify. Alabama’s Patrick Surtain II and Virginia Tech’s Caleb Farley appear to have separated themselves as the top two options. Behind them, is a group with the likes of Jaycee Horn, Eric Stokes, and Tyson Campbell.

In his most recent big board, Pro Football Network’s lead draft analyst Tony Pauline has Horn as his third-rated CB. Pauline has Horn rated as his 30th prospect overall. Could the Patriots look to trade back and still snag Horn later in the draft?

The Dolphins go all-in on their offense

Will the Dolphins be willing to invest that much capital in the RB position?

The selection of Chase makes a lot of sense, and the Dolphins have routinely been linked to a WR at that spot. The selection of Harris raises more eyebrows. That’s because the Dolphins did get some effective play out of their unheralded playmakers in Myles Gaskin and Salvon Ahmed in 2020. Will the Dolphins be willing to invest serious capital in the running back position in the upcoming draft?

In any case, there is little doubt that a Chase and Harris combination would immediately upgrade this offense in a big way.

The selection of Kadarius Toney to Chicago at number 20 in Daniel Jeremiah’s mock draft is a selection that demonstrates the diversity of the wide receiver position. After the consensus top three at the position, the field is somewhat wide open.

In his most recent big board, Pauline actually has Rondale Moore as the third highest-rated wide receiver. Meanwhile, Jeremiah does not have Moore being taken at all in his first round. As for Toney, Pauline has him graded as a second-round prospect and the sixth-rated receiver overall.

While the selection of Toney is not a shocking part of Daniel Jeremiah’s mock draft, it definitely indicates that the fourth receiver spot is very much open. Look for that spot to see a lot of fluctuation over the coming weeks and months.