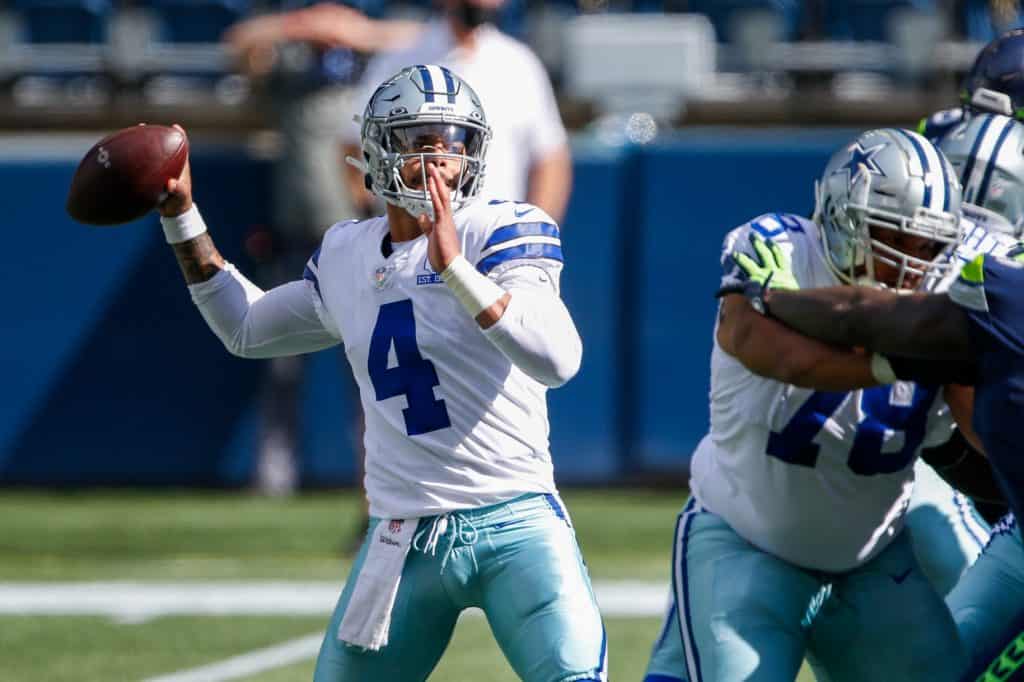 Of all the free agents slated to hit the open market, none are more significant than Dak Prescott. Ever since his first year out of Mississippi State, Prescott has shown continuous growth. From 2016 to 2018, Prescott averaged 3,625 yards on 325 of 491 passing (66.1%) with 22 touchdowns and 8 interceptions. He is also a threat as a rusher, averaging 63 attempts for 314 yards and 6 touchdowns per season.

The skillset Dak Prescott brings is far too valuable to the Cowboys to lose. Yet, this could be a reality after playing hardball. Jerry Jones said one of his biggest regrets was not winning a Super Bowl for Tony Romo. Does he want to add a second name to that list of regrets if he allows Dak Prescott to find a new landing spot in free agency?

Dak Prescott was an early MVP candidate in 2020

Entering the 2020 season, fantasy expectations were high after adding more passing weapons. Furthermore, Dak Prescott was on an MVP-type start to the season.

Unfortunately for Dak Prescott, his season was cut short, but not after showing the world he deserves a massive contract. In 4.5 games, Prescott threw for 1,856 yards (371.2 yards per game) while completing 68% of his passes (151 of 222) with 9 touchdowns and adding 3 more on the ground.

Due to lost revenue of the 2020 season, the NFL salary cap took a massive hit. While it has yet to be nailed down, current estimations have the salary cap at around the $185.5 million range. Earlier in the year, the NFL and NFLPA agreed on a floor of $180 million. However, there is a chance we see it creep close to $190 million.

Because of this, teams will be cash-strapped and have to make difficult decisions regarding veterans and how bullish they can be in free agency. When it comes to quarterbacks, this is massive as they draw the highest salaries.

However, outside of Dak Prescott, there are no “big name” free agents at the position. Prescott will not be cheap to bring onto a new team, and everyone knows it. He has watched as guys like Ryan Tannehill and Patrick Mahomes have signed massive contracts knowing his time was coming.

According to Spotrac, Dak Prescott has an estimated market value of $36.8 million on a four-year, $147.28 million contract. This would make Prescott the third-largest cap hit in the NFL. However, when it comes to elite QBs in their prime, the price is worth it.

As he hits free agency, where are some potential landing spots for Dak Prescott in 2021?

Whatever it takes to get this done, Jerry Jones needs to make it happen. Dallas is 14th in estimated cap space at $25.92 million and has on an offense full of weapons. What is the point of having Ezekiel Elliott, Amari Cooper, CeeDee Lamb, and Michael Gallup, if the offense is stagnant?

We saw the Cowboys went from explosive to New York Jets level in the snap of an ankle. As much as Andy Dalton, Ben DiNucci, and Garrett Gilbert gave it the ol’ college try, none of them are starting-caliber NFL quarterbacks.

Several different contracts have been reportedly offered, varying in length and overall salary. Whatever it takes, they need to reach a middle ground and come to terms before it is too late. Before Dak Prescott chooses a new landing spot in free agency, leaving the Cowboys without a QB.

Would the New York Jets be a potential landing spot for Dak Prescott in free agency?

We know they are on the radar for one Texas QB; why not make it both? Obviously, the Jets are not sold on Sam Darnold, and he is also not a Robert Saleh guy. He is a product of the Adam Gase regime.

Everything coming out of Houston is they are dug in on not trading Deshaun Watson. If he were the target, then the Jets would pivot. Nevertheless, Dak Prescott would be the next best player available to pursue, assuming the Cowboys do not either re-sign him or franchise tag him for 2021.

They can then use the No. 2 overall pick on a pass catcher (Ja’Marr Chase or Kyle Pitts), offensive tackle (Penei Sewell), or trade back and acquire more draft capital. The organization sits second in projected cap space at $82.33 million.

Could Cowboys QB Dak Prescott head to Chicago as a new landing spot?

Chicago was apparently in the Carson Wentz sweepstakes but was outbid by Indianapolis. They have also been linked to the Deshaun Watson circus. But honestly, nearly every team would be interested in him, so this is nothing shocking.

What all of this does point to is the Bears have a QB issue. Mitchell Trubisky will be a free agent, and I think they are regretting the Nick Foles’ contract. GM Ryan Pace and HC Matt Nagy are on the hot seat, and bringing in Dak Prescott in free agency might be enough to get them back in the good graces of the Windy City faithful.

Are the New England Patriots one of the potential landing spots for Cowboys QB Dak Prescott?

New England has been in the rumor mill for every quarterback on the free-agent market after the Cam Newton experiment failed. While not just the fault of Cam, he is far from his MVP days, precisely what Dak Prescott is in right now.

The Patriots need to make a splash and have the salary cap space to do it, sitting third with $72.619 million. They need help all over the offense. If they do not act soon, they could be fourth in the AFC East in a few short years.