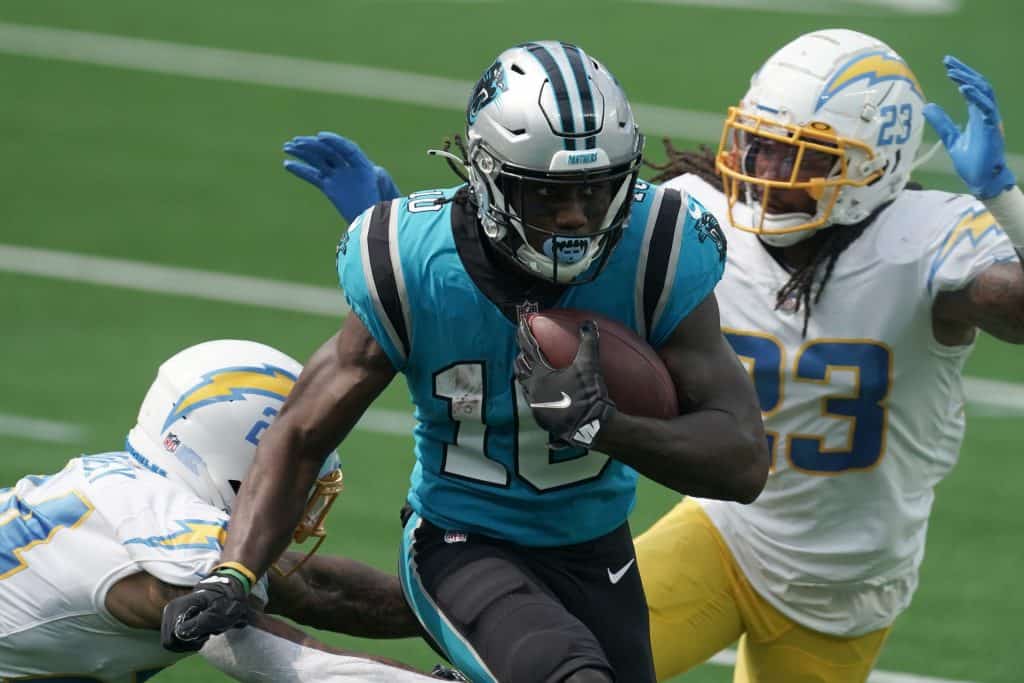 After a fascinating 2020 NFL season, what are the latest rumors regarding the potential landing spot for Curtis Samuel? Let’s take a look at where Samuel could find himself playing in 2021.

Update: According to ESPN’s Adam Schefter, Samuel will sign with the Washington Football Team.

Curtis Samuel brings plenty of versatility to the table, but which teams could be looking to utilize it?

The Washington Football Team is looking for a second receiver to go alongside Terry McLaurin. The addition of Curtis Samuel to the Washington offense would give them a very versatile group. They already have a move tight end in Logan Thomas, as well as a versatile pass-catching back in J.D. McKissic.

Adding Samuel to this mix would give Washington a lot of potential weapons. There is also a link with Samuel and Washington after Ron Rivera was the head coach when the Panthers drafted him.

Curtis Samuel came into his own last season with the Panthers. He contributed a total of 118 touches, both in the passing game and on handoffs out of the backfield. That versatility is ideal for the Panthers, who could use Samuel as a de facto change of pace back for Christian McCaffrey.

Having a pair of players who can line up all over the field in McCaffrey and Samuel could be very useful for the Panthers. However, if they were ready to offer a big deal to Samuel, then they likely already would have. At this point, it seems like the Panthers will have a deal ready for Samuel on a short-term deal if a bigger market does not emerge.

The Miami Dolphins have been rumored to be interested in every free agent wide receiver, including Curtis Samuel. Samuel would be an interesting weapon for the Dolphins out of the slot.

His versatility would allow them to move him all over the field and create intriguing matchups. On the other hand, his role could be very similar to that of Lynn Bowden, who brings an extra element with his ability to pass the ball.

Any free agent wide receiver would be crazy not to consider taking a discount to go and play with Aaron Rodgers. In Green Bay, Curtis Samuel would have the opportunity to be the do-it-all type player for the Packers. With Davante Adams drawing the majority of attention, he would surely see single coverage playing out of the slot.

Samuel could also be a fascinating weapon coming out of the backfield, be that as a runner or in the passing game. Moreover, with Aaron Jones and A.J. Dillon heading up the running back position, Samuel could be an interesting change of pace.

The Jets have Jamison Crowder entering the final year of his deal. They could look to replace him with a player who is younger and can serve a similar role in the offense. Since they signed Corey Davis, the rumors around wide receivers in New York have slowed, but Curtis Samuel could still be in their plans.

What is Curtis Samuel’s potential market value in free agency?

With a limited amount of rumors swirling around the wide receiver position, the market value for Curtis Samuel is fascinating. He really stepped up his game in 2020, pulling in 79 percent of his targets for 851 yards. He also carried the ball 41 times for 200 yards and 2 rushing touchdowns.

Spotrac currently has Curtis Samuel with a market value of around $12.5 million. That would be a similar number to the contracts given to Corey Davis and Nelson Agholor. Likewise, the comparisons Spotrac gives are Brandin Cooks, Stefon Diggs, and Jarvis Landry.

While those three have a higher average value, Samuel’s numbers are around 20 percent lower, giving a projected contract value around that much lower than that group. It will be interesting to see how Samuel’s deal compares to those already handed out in free agency.