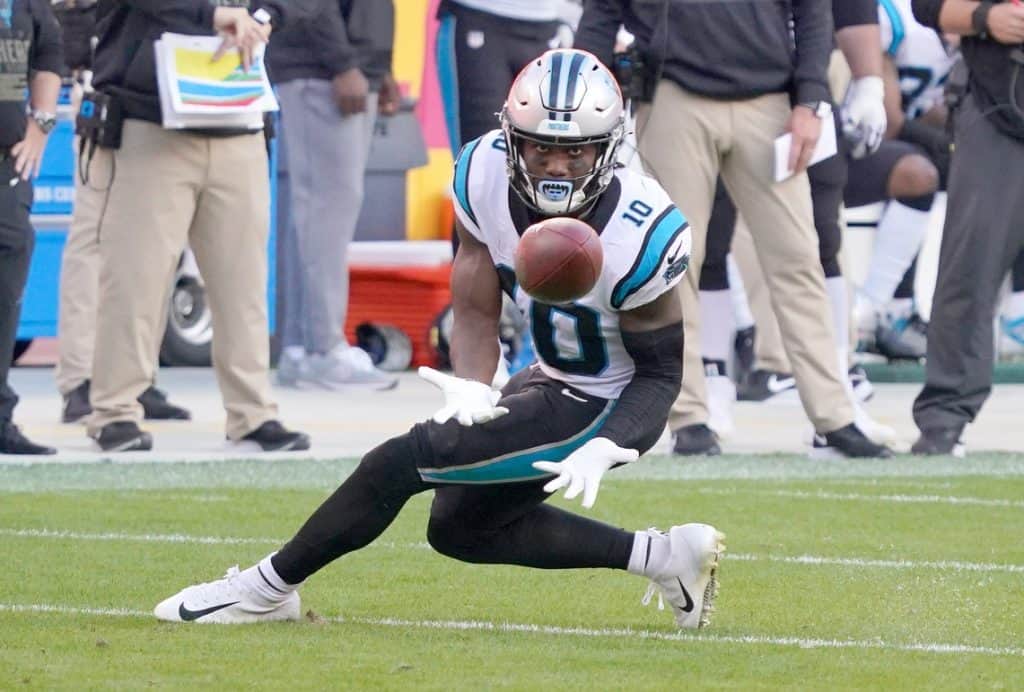 As the 2021 NFL free agency period creeps closer, potential difference-makers like Carolina Panthers’ WR Curtis Samuel begin the process of looking for new potential landing spots. Coming off his best season last year, which teams make the most sense for Curtis Samuel to choose as a possible landing spot in free agency?

Curtis Samuel has always had the talent, but a QB carousel stifled consistency

This year’s free-agent class is packed with elite receiving options. The majority of whom have produced for several years at a very high level. As a result, we will see massive contracts dished out over the next week or so. One of those players sitting in the second-tier of the class is Panthers WR Curtis Samuel. However, there’s a case to be made for him to be one of the most impactful signings of the class.

Panthers WR Curtis Samuel is a dynamic playmaker who is best utilized by a creative coach. Whether in short-to-intermediate routes, sweeps out of the backfield, or double-moves from the slot, Samuel brings a diverse skill set as a team’s swiss-army knife.

Samuel always seemed on the cusp of breaking out

Over his first three seasons out of Ohio State, it seemed every week we were this close to seeing Curtis Samuel take the next step into the national spotlight. The lack of consistency at QB certainly has not helped. Over the last three seasons, Samuel has had five different starting QBs targeting him on Sundays. All to varying extents of success.

In 2018, the Panthers started the QB carousel; Cam Newton made 14 starts but was getting banged up, leading to Taylor Heinicke and Kyle Allen to appear in eight games. Then in 2019, Newton played in just two games, leading to Kyle Allen as the Panthers’ primary starter. He started 13 games along with Will Grier taking the opening snaps in two more.

If I had any video editing skills what-so-ever, I could put together a 10-minute clip of missed targets that would have either been touchdowns or 20+ yard completions. His seasons were full of errant passes where the QB underthrew Samuel or just completely ignored him even though he starched the DB at the line.

There is no better time to have a career-season than in your contract year with free agency on the horizon. The Panthers made sweep changes heading into 2020. First, they brought in a new head coach in Matt Rhule out of Baylor. Secondly, LSU’s OC Joe Brady took on the same role with the team after masterminding one of NCAA history’s greatest offenses. They also found a new quarterback after releasing Newton in Teddy Bridgewater.

Thanks to Brady’s creativeness, Curtis Samuel was all over the field and showed the dynamic ability we knew was there. In 15 games, Samuel set career-highs in catches, receptions percentage, and yards. Targeted 97 times, Samuel caught 77 passes for 851 yards and 3 touchdowns. He also set records as a rusher, carrying the ball 41 times for 200 yards and 2 touchdowns.

All of this production came despite the somewhat mediocre QB play of Bridgewater. If you needed a pass throw that is on target, Bridgewater could do it. He is fourth in the NFL at 80.5%. However, he was 19th in intended air yards (3,511). Bridgewater averaged 5.1 air yards per pass, ninth-lowest on NFL’s Next Gen Stats. He was also fourth-lowest in aggressiveness at 12.2%.

As he searches for a new landing spot, Curtis Samuel proved he is a weapon on offense and will benefit from a creative play-caller who can use his diverse skill set to an impact player.

Due to lost revenue of the 2020 season, the NFL salary cap took a massive hit. While it has yet to be nailed down, current estimations have the salary cap around the $185.5 million range. Earlier in the year, the NFL and NFLPA agreed on a floor of $180 million, but there is a chance we see it creep closer to $190 million. Even with less than 24 hours until the “deadline,” there has been no word on the salary cap in 2021.

As for someone like Panthers WR Curtis Samuel, his potential value could drastically shift. He is talented enough to deserve a large contract. However, he is not a player who will solve a team’s hole at WR1. Spotrac has his market value estimated at $12.4 million over a four-year, $49.96 million contract.

The real question is though, are the Panthers willing to allow WR Curtis Samuel to hit the open market and test free agency?

If he hits free agency, where are potential landing spots for Panthers’ WR Curtis Samuel in 2021?

This is a possibility, but recent indications are it is unlikely. While they are seventh in cap space at $37.16 million, according to Spotrac, the Panthers have several needs and priorities. One of which is keeping RT Taylor Moton on the team. The Panthers could also attempt a tag and trade with Samuel. However, that would require a team willing to work with the Panthers and have a long-term deal in place with Curtis Samuel.

After adding Robby Anderson in 2020, it seems more likely the Panthers will let WR Curtis Samuel walk in free agency and find a new landing spot. Hopefully, somewhere outside of the NFC South.

Washington has Terry McLaurin and then a bunch of question marks at receiver. No one is quite sure what Antonio Gandy-Golden will be after missing a season that puts him behind the 8-ball in development.

Washington has a defense that was good enough to get them into the playoffs and needs an offense that can at least keep up. Curtis Samuel is not going to be a WR1, and he doesn’t need to be for Washington. This also reunites him with his former head coach in Ron Rivera, and he can serve as a viable WR2 for whoever they have under center in 2021.

The Jaguars will be a trendy pick for WR landing spots as they are a franchise needing perimeter help. They’re also in the middle of a culture change with Urban Meyer and future face of the franchise, Trevor Lawrence. There is also a connection between these camps as Meyer was the coach of Curtis Samuel when he was at Ohio State.

Jacksonville has the most cap space in the NFL at $85.668 million and will be active in the WR market. Pairing up Curtis Samuel in free agency with DJ Chark and Laviska Shenault gives the Jaguars three legitimate receiving threats.

The New England Patriots will be a landing spot tied to every big-name free agent in 2021, including Curtis Samuel

The New England Patriots have the worst skill group in the NFL right now. I don’t think it is that close. N’Keal Harry has been a bust, and Julian Edleman is 34 and dealing with injuries. In 2020, their top WR was a UDFA from NC State (Jakobi Meyers).

The Patriots desperately need help at the receiver to retake the crown from the Buffalo Bills. Sitting with the third-most cap space ($72.619 million), the offense needs a complete overhaul.

If Curtis Samuel does choose New England as the landing spot, he would instantly be a favorite target of whoever is under center. New England would still need to bring in other talents though as Samuel is not enough to fix their issues.

Imagine: Aaron Rodgers gets help at receiver from the Packers. What a novel idea! Anytime he is not throwing to Davante Adams, you can tell Aaron Rodgers is just hoping his receiver can hang on to the ball rather than expecting highlights.

The Packers need to win now with Rodgers in his twilight. The issue will be cap space as they are $5.84 million over the cap with numerous other problems on their team.