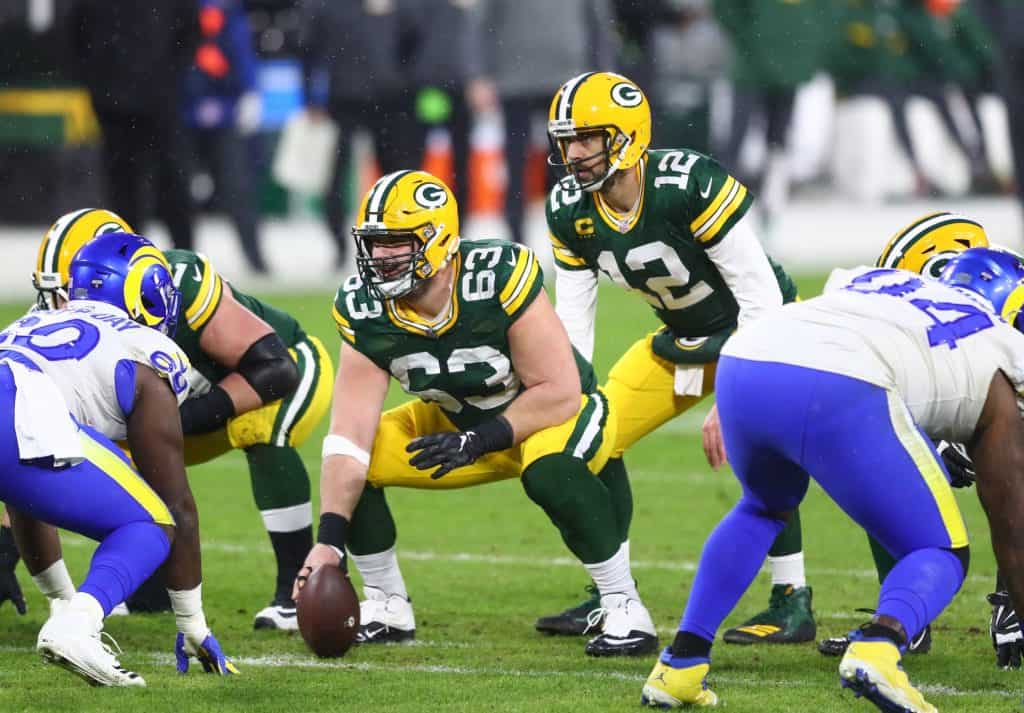 Interior Green Bay Packers OL Corey Linsley has established himself as one of the best centers in the NFL, but where are his potential landing spots when free agency begins? Let’s take a look at where the offensive lineman could end up this offseason.

Securing a good center can be a key starting point for an offensive line. With that in mind, what are the potential landing spots for Packers OL Corey Linsley?

A return to the Packers is not out of the question

After being drafted in the fifth round of the 2014 NFL Draft, Corey Linsley has spent seven seasons in Green Bay. During that time, he has been a key part of this offense. That relationship between a center and a QB is so important. Therefore, do not be surprised if the Packers make a big effort to bring back Linsley this offseason.

Could the Los Angeles Chargers look to lock in a veteran center for their young QB?

Chargers center Dan Feeney is about to become a free agent, and Mike Pouncey recently retired. As a result, the Chargers become an ideal landing spot for Corey Linsley. Last offseason, the Chargers invested in Bryan Bulaga, and now they have an opportunity to bring in another former Packers OL to be the base of their line.

Putting Linsley at center would give the Chargers two solid pieces on their line to fortify Herbert’s protection. They still have questions at left tackle and both guard spots. However, getting a good center and a strong right tackle in consecutive offseasons is a good start.

Miami’s offensive line is in a great position right now. Nevertheless, what makes this a good landing spot for Corey Linsley is the departure of Ted Karras. With Austin Jackson, Ereck Flowers, Robert Hunt, and now Isaiah Wilson, the Dolphins may have four of their pieces sorted already.

Bringing in Linsley could secure the center of that line and give young QB Tua Tagovailoa a center that he can grow with throughout his career.

The Chiefs have question marks across their offensive line. The cost could be a prohibitive factor for this Corey Linsley landing spot, but if he wants to go to a challenger, there are not many better options right now.

The Giants are another team who have addressed their offensive line recently. However, with Spencer Pulley set to leave this year, the Giants need to address the position. As they look to find out whether Daniel Jones is their franchise QB, securing a center of Linsley’s talent would be a major move.

What is Linsley’s market value in free agency?

Whether Linsley can top the list of the highest-paid centers in the NFL is questionable. He is extremely talented, but this strange offseason may prevent any of Corey Linsley’s potential landing spots really breaking the bank.

As it stands, Spotrac has Linsley projected for a three-year deal worth just below $30 million per year. A deal of that magnitude would value Linsley as around the ninth-highest paid player at the position. Therefore, it seems more likely Linsley resides closer to the $11 million a year that would place him in the top five at the position.