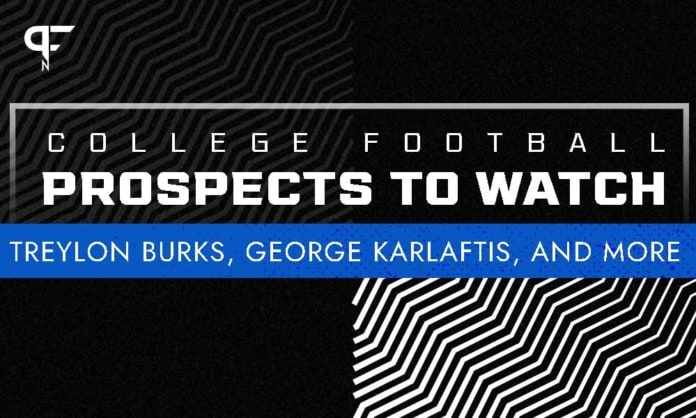 PFN's Chief Draft Analyst Tony Pauline details a few matchups the scouting community will be focusing on during Week 5 of college football.

Week 5 on the college football season includes several significant games that will impact conference and national levels. The fun starts immediately as the high-flying Arkansas Razorbacks take on the No. 2-ranked Georgia Bulldogs at noon. Here’s a little more on this game as well as draft news from a separate Big Ten contest.

We previewed the Razorbacks-Bulldogs contest during this week’s edition of “Between the Hashes.” The podcast focused on the matchup between Arkansas receiver Treylon Burks and Georgia’s starting corners Tykee Smith and Derion Kendrick.

We forgot to throw Georgia safety Lewis Cine into the conversation. There are factions of the scouting community who love Cine and stamp him as a second-round prospect. The junior measures well, coming in over 6-feet tall. However, he has too many suspect plays in coverage. The ability to help his corners slow down Burks is huge for Cine.

Another noon game with draft repercussions will take place in the Big Ten as Purdue takes on Minnesota.

Momentum for Purdue pass rusher George Karlaftis has picked up since I wrote a glowing report on the junior this summer. As I mentioned a few weeks ago, the debate in the scouting community is not whether Karlaftis will be a first-round pick. The question boils down to how early he’ll end up going on Day 1. The Gophers pose one of the toughest challenges for Karlaftis this season, if not his stoutest test of the year.

The obvious one-on-one to watch is Karlaftis against Minnesota right tackle Daniel Faalele. Faalele is a Day 2 prospect with rare size and athleticism, so he’ll be a challenge for Karlaftis all game long. Golden Gophers left tackle Sam Schlueter, guards Blaise Andries and Conner Olson, and center John Michael Schmitz will all be in NFL camps next summer via being selected in the 2022 NFL Draft or signed as UDFAs afterward.

These are the two things that really stood out to me during the noon games: Georgia’s defensive line and Minnesota offensive tackle Daniel Faalele.

Many were justifiably anticipating the matchup between Razorbacks receiver Burks and the Georgia secondary. The problem is Arkansas never got their offense rolling as the Georgia defensive line completely dominated the action. The Razorbacks had a single drive in the first half that was not a three-and-out –which resulted in a missed field goal.

Devonte Wyatt, Jordan Davis, Travon Walker, and Co. have controlled the line of scrimmage. Wyatt especially, whom I grade as a third-round pick, has played all-world football today.

As far as domination, Faalele has done a pretty good job of it against projected first-round selection George Karlaftis.

Purdue has been moving Karlaftis around the field all game long. When lined on the left side, Minnesota uses two and sometimes three blockers to stop Karlaftis. Yet, he’s still getting penetration.

However, it’s a different story when the pass rusher moves to the right side and lines up opposite Faalele. Faalele has pretty much handled the explosive Karlaftis, using his enormous size and incredible athleticism to control the Purdue junior.