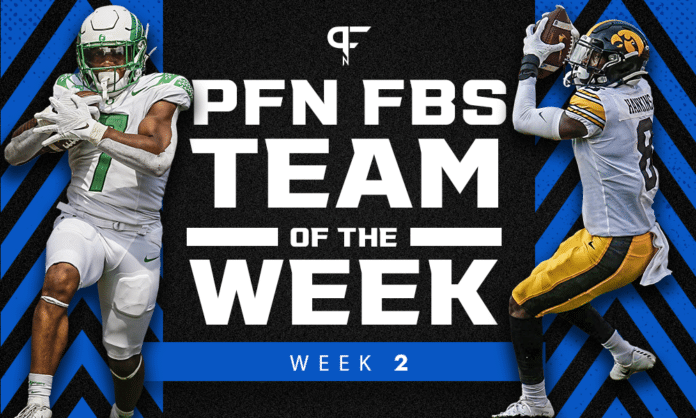 Week 2 of the college football season separates the casual fans from the diehard fans. But it wasn't short on action in our Team of the Week.

Week 2 of the college football season separates the casual fans from the diehards. It also makes it more difficult to find players worthy of our Team of the Week. With 82 games featuring FBS teams, finding the right mix of elite performances against better competition becomes even more taxing.

The college football Team of the Week for Week 2 is a great mix of players across the board. Some beat up on inferior opponents, while others dominated against in-conference foes. Finding the players who played their best wasn’t difficult; it was finding who did it when it mattered most and against who.

We begin with the offense in our Week 2 Team of the Week.

The Week 2 Saturday slate kicked off with a bang at 11 AM ET when Armstrong lit up the field. The Cavs dominated from the start against Illinois, and their signal-caller was the reason why. Armstrong threw 3 first-half touchdowns to set the tone. He became just UVA’s fourth quarterback in history to throw for over 400 yards.

Offensive coordinator Joe Moorhead deserves a lot of credit for the Ducks’ win over Ohio State. CJ Verdell deserves just as much. Finding something that worked, Moorhead utilized Verdell’s skill set on a variation of what felt like the same play over and over against the Buckeyes. And it kept working.

Verdell finished the game with 20 carries for 161 yards and 2 touchdowns. He set the tone early and secured crucial first downs late. It was a dominant performance, easily landing him on our Team of the Week.

Rodriguez certainly had large holes to run through against Missouri, but he manufactured plenty of his own yardage. He finished the game with 27 carries, 206 yards, and 3 touchdowns. He opened up the scoring on the evening with a 5-yard touchdown reception to boot.

A rare blend of speed and power, Rodriguez bullied his way to a career-high rushing yard total. His 4 touchdowns also included the go-ahead score to win it for the Wildcats.

Proving to be too much single-handedly for UConn, David Bell made the most of his limited targets in Week 2. Bell was targeted just 6 times but made all 6 receptions for 121 yards. He scored 3 touchdowns on the afternoon, each one as impressive as the next.

Bell showcased what separates him from most other FBS receivers with his incredible yards-after-the-catch ability. He bounced off defenders the same as he ran around them or made them miss in an unforgettable performance.

Welcome back to the Team of the Week, Jayden Reed. The one-time Western Michigan transfer finally showcased what made him such a sought-after transfer player back in 2018. With a 4-reception, 181-yard, 2-touchdown performance under his belt, Reed has already eclipsed half of his production from a season ago.

Perhaps the nation’s top slot receiver at his best, Reed proved it on Saturday, earning a team of the week spot with ease.

Targeted mainly in the short area of the field, Austin weaved his way through defenders more often than not. He averaged a whopping 39.8 yards per catch.

It wasn’t as strong a showing as they’d prefer, but the Fighting Irish snuck away with a victory against Toledo. Proving too much for the middle of Toledo’s defense, Mayer hauled in 2 scores on 7 receptions. He helped churn out 4 more first-down receptions in the game that saw first downs become more and more crucial.

Richardson’s historic outing for Florida likely caused more problems than it solved for the Gators moving forward. With his true emergence just two games into the season, Florida head coach Dan Mullen has to figure out which QB is best for continued success this season.

Team drama aside, Richardson was ridiculously effective in Week 2 against USF. He completed all 3 of his pass attempts for 152 yards and 2 touchdowns. He ran another 4 times for 115 yards and 1 touchdown. His lone “non-touchdown” was the best throw of the afternoon — when he glanced to his left side and dropped a beautiful downfield shot against the sidelines to Jacob Copeland.

Richardson has all the arm talent in the world. He’s also perhaps the best athlete whenever he steps on the football field, regardless of opponent.

The Holy War went the way of the Cougars late Saturday night, and the offensive line production was a big reason why. Freeland gets the nod as our left tackle on our Team of the Week after producing big holes in the run game and keeping Jaren Hall’s blindside clear in the passing game. Freeland has taken over for current Carolina Panthers OT Brady Christensen and hasn’t looked back.

It doesn’t take a rocket scientist to understand just how good this Baylor offensive line has become. Just two games into the Eric Mateos era in Waco, the Bears have become the nation’s top offensive line. Newman-Johnson (and see below) is the latest to earn Team of the Week honors after a dominant performance inside against Texas Southern.

It took all of two plays to see the dominance on film as the Bears rushed for an average of 11.1 yards per carry on true run plays.

Gall rounds out the top two Baylor performers on the offensive line. We likely could have placed all five starters and all five reserves on the Team of the Week. Gall was dominant at the point of attack and routinely found the second level in the run game.

It was a dominant performance, and Gall (the Buffalo transfer) led the way.

Cox was crucial to the Wildcats’ success against Missouri. He not only paved the way for big gains on the ground and kept Will Levis clean from pressure, but he also saved the day, whether it counted or not.

Cox pounced on a ball in the end zone that was fumbled (or not) by Rodriguez. The play wasn’t reviewed as there was a clear recovery in the end zone so it went unidentified in the box score. Nevertheless, Cox’s recovery proved to be the difference in the game.

The Black Knights won in impressive fashion on Saturday against Western Kentucky. While their defense held the Hilltoppers’ Air Raid offense in check, Finucane was remarkable on the outside for Army’s triple-option attack. His efforts both at the point of attack and all the way as far as the third level did not go unnoticed.

“Single-footedly,” Guajardo won the game for the Jaguars in Week 2. Tied at 19 points apiece, Guajardo’s 44-yard field goal won it against Bowling Green. He was perfect on the afternoon, hitting 3-of-3 field goals and his lone extra point.

Next Page: Defense Team of the Week