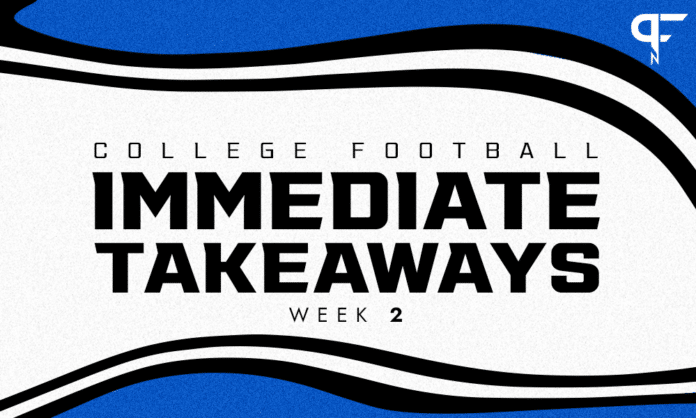 Is Oregon a playoff team? Is Iowa the team to beat in the Big Ten? Let's dive into the takeaways from college football in the Week 2 recap.

Another week of college football is in the books, and just like Iowa against Iowa State, we have lots of takeaways. Has Oregon put the Pac-12 back on the playoff map? Is the Big Ten the most open of all the conferences? Which teams are being overrated through two weeks? And, do we finally have an answer to one of college football’s most pressing questions? Let’s recap Week 2 of the 2021 college football season.

Ohio State hadn’t lost a home game since 2017. Oregon had never beaten the Buckeyes in nine previous attempts. Hardly anyone gave the Ducks a chance, including the oddsmakers who made Ohio State a 14.5-point favorite. Yet, when the dust settled on a wild September afternoon in Columbus, it was Oregon that emerged victorious.

However, it was the offense that was the ultimate difference-maker. While Ryan Day forced Stroud to make complicated passes and limited the ground game, Oregon had a simple game plan. Having seen Minnesota expose the Buckeyes’ rushing defense, they put the ball in CJ Verdell‘s hands and thrived. The 2022 NFL Draft prospect racked up 161 rushing yards and 2 touchdowns on the ground. He also added a receiving score.

Former Boston College QB Anthony Brown contributed 65 yards on the ground. Meanwhile, he found 11 different receivers as he racked up 236 passing yards. As Thibodeaux watched from the sideline, you could have been forgiven for thinking it was Ohio State’s star pass rushers who were absent. Zach Harrison was missing in action. And despite logging 2 quarterback hurries, Tyreke Smith never got home as the Oregon offensive line excelled.

The Pac-12 hasn’t had a representative in the College Football Playoff since Washington in 2016. Oregon hasn’t been to the final four since it was blown out by Ohio State in the 2015 National Championship. However, their performance on Saturday showed that they’re ready to drag the conference back to the big stage.

Now, they just have to ensure they don’t self-sabotage as the Pac-12 is prone to. A date with UCLA in late October could prove pivotal to the Pac-12’s return to the playoff.

College Football Takeaways: Iowa the team to beat in the Big Ten?

Although Ohio State’s loss to Oregon doesn’t rule them out of a spot in the final four, the Buckeyes will need to win out and take home the Big Ten Championship if they’re to stand a realistic chance of reaching the playoff. It’s becoming clear that Iowa might be the team to stand in their way.

After surprising Indiana in Week 1, the Hawkeyes once again overcame the odds to record a 27-17 win in the El Assico game with Iowa State. The victory extended Iowa’s win streak in the rivalry to seven consecutive games, despite the Cyclones being ranked above them and favored by 4.5 points before kickoff.

Although their toughest tests are yet to come, the Hawkeyes may just have one of the top defenses in the nation. They haven’t conceded more than 25 points since their 31-28 win over Nebraska in 2018. Furthermore, they’ve ranked in the top 10 for points allowed in the last two seasons. The unit forced 4 turnovers on Saturday, including a fumble by Breece Hall on another night to forget for one of the top running backs in the 2022 NFL Draft.

While they suffocated on defense, Iowa dominated on special teams, consistently forcing the Cyclones into difficult field position. Although their offense wasn’t explosive, Tyler Goodson running behind Tyler Linderbaum continues to be good for business.

Wins for Michigan, Penn State, and Michigan State ensures that the Big Ten remains one of the most wide-open conferences in the nation. The Hawkeyes’ clash with the Nittany Lions on October 9 could be the biggest obstacle in their bid to reach the Big Ten Championship Game. By that time, they could be a top-five ranked team in the nation.

Texas, it transpires, is not back

By 2025, the Texas Longhorns will be playing in the SEC. With the announcement this week that the Big 12 will start adding teams to the conference as soon as 2023, there was an anticipation that Texas might seek to make the switch sooner. The program that championed “all gas, no brakes” in the offseason might want to pump the brakes on that move until the on-field product has improved.

Failing to live up to snazzy catchphrases has become the thing that Texas is best at. The hire of Steve Sarkisian was expected to fire the Longhorns back into national relevance. However, they looked no closer to being “back” on Saturday night than they were under Tom Herman last season.

Arkansas beat the Longhorns in every phase of the game, as the two teams renewed a college football rivalry that was ironically retired with the Razorbacks’ transition to the SEC. A dire Texas line and unimaginative play-calling spurts led to a stagnant offense. The defense was gashed on the ground. Even the Longhorns’ special teams were lackluster, allowing a blocked punt with little resistance.

This was hardly Alabama that the Longhorns were facing. Lest we forget that Arkansas struggled to a victory over Rice last weekend. Also, Texas was the ranked team in this matchup. Take nothing away from the job that Sam Pittman and Barry Odom are doing with the Razorbacks. Still, if Texas wants to be taken seriously as a nationally relevant program, they can’t be blown out in such abysmal fashion.

Texas fans will be the first to tell you that their “little brother in the SEC” is overrated. Do the Longhorns fans have a valid point where Texas A&M is concerned so far this fall? While two games is too small a sample size to salt their season away just yet, there’s no doubt that the Aggies have failed to live up to their preseason expectations.

Furthermore, they’re not playing like a college football team that’s ranked No. 5 in the nation. For the longest time on Saturday, they looked like they would become the second victim to a Pac-12 team. They eventually overcame Colorado with an Isaiah Spiller receiving touchdown for a 10-7 victory, but it was a disappointing and disjointed performance.

This is an Aggies team that is possibly the most talented that Jimbo Fisher has ever had. DeMarvin Leal, Kenyon Green, Jalen Wydermyer, and Spiller are amongst the most talented playmakers at their positions. Yet, they struggled in the first half against Kent State and were on upset alert until late in the fourth against Colorado.

Losing Haynes King obviously hurt, but Zach Calzada supposedly ran him close in the summer QB competition. There was an obvious gulf in talent between the two, raising questions about why it took Jimbo so long to name the starter.

The quarterback position doesn’t appear to be the problem in South Bend. Although he threw a first-half interception, Jack Coan overcame a dislocated finger to lead Notre Dame past Toledo. The former Wisconsin QB found tight end Michael Mayer for an 18-yard TD with just 1:09 left on the clock, sealing a 32-29 win.

Defense most certainly is an issue for the Fighting Irish. Despite having dynamic defensive playmaker Kyle Hamilton at the heart of their secondary, Notre Dame has consistently given up big plays through two games.

They sacrificed over 250 yards on the ground against FSU. On Saturday night, Toledo’s Bryant Koback amassed 122 rushing yards. Meanwhile, he averaged the same 5.8 yards per carry as he had against Norfolk State the week before.

Two close wins over allegedly inferior opposition is hardly the making of a top-10 college football team. That’s especially true when you consider FSU’s shocking defeat at the hands of FCS Jacksonville State in Week 2.

Can we get a high five?! Some of the 2022 NFL Draft’s top quarterbacks feasted on cupcake opposition to bounce back from disappointing opening-day performances.

Spencer Rattler completed 77% of his passes, throwing for 243 yards and 5 touchdowns in a 76-0 win over Western Carolina. It was a short night of work for Rattler, who was replaced by Caleb Williams in the second half.

Not to be outdone, Sam Howell threw for 3 touchdowns while rushing for another 2 scores as North Carolina beat Georgia State 59-17. Howell completed 72% of his attempts, tallying 456 total yards.

Although he hasn’t received much buzz as an NFL Draft prospect, Virginia’s Brennan Armstrong joined the party with 5 touchdowns in a 42-14 win over Illinois.