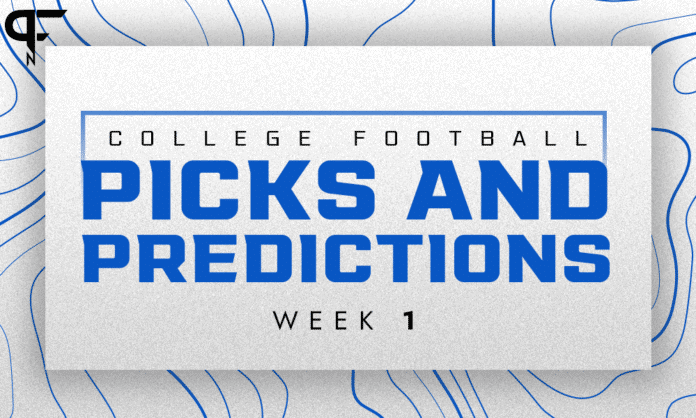 College football picks and predictions against the spread for Week 1

Week 1 brings the first slate of college football picks and predictions. This weekend's most intriguing matchups could net some serious value.

Saturday’s slate of matchups during Week 1 of the college football season never fails to entertain. With a rise in sports betting, we take a look at the most intriguing matchups in our Week 1 college football picks and predictions against the spread.

Though Week 1 finds itself with multiple lower-division teams pitting themselves against top-tier units, the slate of games is delightful. There are multiple must-see games, and the only trouble with Week 1 is figuring out how to watch them all simultaneously. Here are some of the latest lines, all up to date via DraftKings Sportsbook as of Thursday at 10 AM ET.

Saturday’s college football picks and predictions against the spread

Here are some of the most intriguing matchups based on the current lines during Week 1 of the college football slate.

Each of these storied Big Ten programs are surrounded by a ton of preseason hype entering the 2021 season. Except, in this case, only one of those teams is likely deserving of the hype. The Wisconsin offensive line averages 6’5 1/2″, 312.5 pounds, and has combined to log 83 career games with 40 career starts. It’s a deep unit against a less-than-impressive front seven for Penn State. Wisconsin should grab a lead and keep it with this unit.

Let it be known that this will be a 9 AM PT kick for the Stanford Cardinal as they break in new starting quarterback Tanner McKee. Stanford will be replacing a ton of starters and snaps on the offensive and defensive lines. The Cardinal also won their four games a season ago by a combined 10 points. Kansas State, at home, with early-season Skylar Thompson, is a must-grab at this price.

The Fresno State Bulldogs are a furious bunch on offense and have a Week 0 tune-up game against UConn already under their belts. Jake Haener proved he’s every bit of a finely-tuned throwing machine with his second-quarter performance last week. The Bulldogs will have to play as they did in that second quarter against UConn for the entire matchup, but the blueprint for a Fresno State cover is there as Oregon potentially looks ahead to the Ohio State next week.

Michael Penix Jr. is easily the best quarterback returning to the Big Ten in 2021, and he’ll face arguably his stiffest test outside of Ohio State in Week 1.  Iowa’s secondary is very experienced but lacks big-play potential, whereas Ty Fryfogle is a big play waiting to happen. Indiana is poised to win this game outright as they contend for the Big Ten in 2021.

Navy came out flat-footed a season ago in their season opener against BYU. Though we can’t expect that kind of performance to repeat itself, we can expect the Thundering Herd to be prepared for Navy’s triple-option attack in a Week 1 matchup more than we could if this matchup were later in the season.

The loss of LB Tavante Beckett hurts Marshall on defense, but the first half of QB Grant Wells’ season a year ago was among the best in Conference USA. If good Grant Wells returns, Marshall outscores Navy by a dozen.

West Virginia is the better team at this point, or so it seems. The Terrapins return several intriguing pieces, but this game should be more like a touchdown spread overall. QB Taulia Tagovailoa is just above a career 50-50 thrower with 8 touchdowns against 7 interceptions. West Virginia has several defensive backs who can contend with Tagovailoa’s (lack of) prowess in the pocket. WVU should travel incredibly well across I-70/I-68 to College Park and throw that home-field advantage away for Maryland.

Houston gets the benefit of the doubt of a home game. Thus, they’re less than a field-goal underdog to a far superior Red Raiders team in 2021. Matt Wells has Texas Tech poised to be a much better team this season, and a lot of that should be centered around new offensive coordinator Sonny Cumbie.

If they iron out any kinks early with new starting quarterback Tyler Shough, the Red Raiders will be a team that puts up a ton of points. Even with Damarion Williams, Gervarrius Owens, and Marcus Jones in the secondary, Houston’s defense will not be able to keep up.

The Orange will have one of the ACC‘s most experienced quarterbacks in the backfield this season as Tommy DeVito returns for a fourth season. With a full bill of clean health, DeVito will once again find his receivers with open space against an experienced Bobcats’ secondary. Whether or not DeVito’s receivers actually catch the balls will ultimately be the determining factor here. Additionally, Taj Harris should have a big night.

The weekend’s marquee slate brings with it a ton of interesting storylines. There’s plenty of 2022 NFL Draft prospects on center stage. There are even 2023 prospects primed to make their names known. However, the biggest storyline is that the transition of power in the SEC could begin in this game.

Georgia is poised to be the new power with the team that Kirby Smart has built. An influx in transfer players mixed with solid recruiting has the Bulldogs as the clear favorites to challenge Alabama in 2021. Combine that with the fact that QB JT Daniels played the nation’s best football in the final four games last season, and you have a clear winner. Daniels plays well, and Georgia wins outright.

The nation’s top receiving leader returns to South Alabama this season with perhaps an even better quarterback. Jalen Tolbert went for 169 receiving yards and 2 touchdowns against Southern Miss last year, and this was even before the Golden Eagles had quit on the season. The Jaguars now have former South Carolina and Utah QB Jake Bentley to guide them and get the ball to the nation’s top playmaker. Bentley to Tolbert will be a common sighting in the box score here.