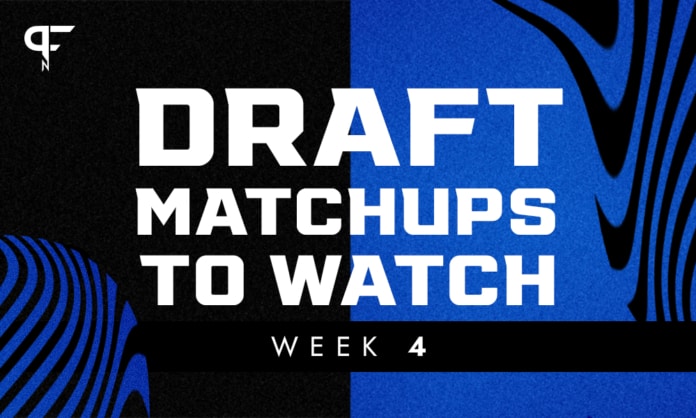 What are some of the best prospect matchups to watch in Week 4 of the 2021 college football season? Here's a closer look at the action.

Week 3 was filled to the brim with exciting prospect matchups to watch. Week 4 of the college football season won’t be quite as matchup dense, as some notable teams are on bye weeks. Nevertheless, there are still many college football prospects to watch in Week 4. Here’s a look at the list, with a few college football premier battles on top!

What are the top college football prospect matchups to watch in Week 4?

Alabama and Georgia are the household names in the SEC, but Texas A&M and Arkansas are both ascending programs. The Aggies, under Jimbo Fisher, are coming off a 2020 season that saw them finish in the top five. The Razorbacks, meanwhile, are ranked for the first time in five years following a 3-0 start to the 2021 campaign. Who are the prospects to watch in this Week 4 game?

DeMarvin Leal is widely considered the best interior defensive line prospect in the 2022 NFL Draft. With an exciting mix of length, athleticism, and power, Leal can be a mismatch nightmare for opposing offensive lines. He lines up on the edge a lot as a pass rusher and thus may see more of Arkansas left tackle Myron Cunningham. But when he’s on the interior, Ricky Stromberg will be an even tougher test. Stromberg is an ascending center prospect with solid mobility and strong leverage, and a finisher mentality.

The Aggies have a few weapons that Arkansas safety Jalen Catalon will need to keep an eye on as the Razorbacks’ chief defensive playmaker. Jalen Wydermyer could be a problem, and running back Isaiah Spiller could also cause trouble.

But one underrated player in the Aggies’ offense is hybrid RB/WR Ainias Smith. Like Catalon, Smith isn’t the biggest player at his position. But he’s a crisp route runner with great lateral burst and agility. Catalon has range, instincts, and short-area burst to contend with Smith, but the Aggies can use Smith in deceptive ways.

While Stanford may be underwhelming as a team overall, it does still have NFL Draft-worthy talent. Particularly on the defensive side of the ball, the Cardinal could pose a threat to a UCLA team that’s trying to rebound after a loss to the upstart Fresno State Bulldogs. How do these two units match up?

UCLA’s hot start to the 2021 season was largely predicated on the team’s stellar offensive line play. Sean Rhyan is the best prospect on the line, but guard Paul Grattan also has NFL potential. His upside is considerably lower than Rhyan’s, but with his density, aggressiveness, and natural leverage, he could potentially be drafted. If he can beat Thomas Booker, it’ll help his odds. Booker is an extreme mismatch for Grattan with his length and explosive athleticism, and it’ll take precise hand usage to lock him down.

If Booker holds strong, UCLA may need to rely on its passing game this week. But even that plan of attack could have roadblocks. Bruins receiver Kyle Philips will have his hands full with Kyu Blu Kelly, Stanford’s budding star at cornerback.

In just three games this year, Kelly has 2 interceptions, a pick-six, and 4 pass deflections. He’s long and athletic with excellent ball skills, but how he mirrors Philips will be a matchup to watch. Philips is a smaller receiver with good route-running ability, and he’s also fairly agile. If Kelly displays the necessary hip fluidity to match Philips, his stock could keep shooting upward.

Our final matchup preview features a West Virginia team that’s riding high after a victory over Virginia Tech and the Hokies’ vaunted defense. The Mountaineers will certainly be upset-minded for a second straight week, but the Oklahoma Sooners are a different beast — especially if they can play to their full potential. Which prospects demand your attention in this Week 4 college football clash?

A big reason behind West Virginia’s win against Virginia Tech was its rushing attack. Starting running back Leddie Brown amassed 161 yards and a touchdown on 19 carries. Many of Brown’s running lanes were paved open by Doug Nester — a large, reasonably athletic guard who showed good grip strength and moved well to the second level.

Nester did well against a talented VT unit, and the Sooners won’t be any easier. Perrion Winfrey is an incredibly twitchy defensive tackle who’s off to a hot start, with 2.5 sacks and 3 tackles for loss in his first three games.

The Mountaineers lost a legitimate NFL Draft prospect in their secondary when Tykee Smith transferred to Georgia. But they might have gained one back in Alonzo Addae. Addae is a bit older and a bit smaller than preferred. Thus, he’s probably a late-round pick at best.

But Addae has good burst and instincts, and he’s off to a productive start, with 3 tackles for loss, a sack, and 2 pass deflections in three games. Addae could give Spencer Rattler some trouble in coverage. It’ll be up to Rattler to maintain eye discipline and recognize safer options when he has them. That’s a sticking point for his draft stock right now.

Matchups to watch in Week 4