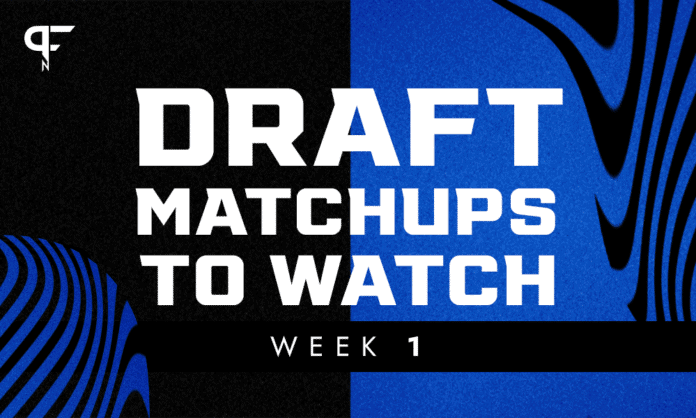 Week 0 gifted us with several college football games on TV, but Week 1 is its true return. Dozens of games and matchups are on the college football Week 1 slate, including introductory appearances from teams of the Big 12, SEC, and ACC. College football may have been “officially” back last week, but it’s officially officially back this week. And we couldn’t be happier.

With so many games on tap in Week 1 of college football, there are some great NFL Draft prospect matchups. Here, we’ve compiled four games that are especially matchup-dense. But below all of that, there are also individual matchups to take note of from other, less-heralded games.

This Big Ten showdown features a bit more star power than last week’s intra-conference matchup. Any game with Ohio State is bound to carry plenty of weight, but the Golden Gophers may be seeking redemption after a down 2020 season. Set to take place at 8:00 PM ET on Thursday [September 2], what are the premier player battles in this one?

Once a highly rated recruit, Nicholas Petit-Frere has predictably developed into a rising star on the offensive line. He showed growth at tackle last season and will now presumably make the switch to left tackle, protecting the blindside of starting quarterback C.J. Stroud.

Petit-Frere and left guard Thayer Munford will pose quite the challenge for Minnesota’s defense, but the Gophers may have a secret weapon in edge rusher Boye Mafe. Mafe is one of Feldman’s Freaks, with a 4.57 40-yard dash, a 40.5-inch vertical, and a 126-inch broad jump on record at 6’4″, 263 pounds. The athletic tools are there, and if he’s refined his game this offseason, he can cause some trouble against the Buckeyes.

Another bout between potential Day 2 prospects, Minnesota’s clash with Ohio State will pit wide receiver Chris Autman-Bell against Buckeyes cornerback Sevyn Banks. Banks, in particular, has incredibly high expectations as the next man up in Ohio State’s cornerback pipeline. He has the athletic upside to be great, but mentally, things haven’t clicked for him yet.

Autman-Bell is a good test for Banks in the season opener. The Minnesota WR also has much to prove ahead of the 2021 season. He’s a twitchy route runner with good density and run-after-catch ability, but he isn’t quite the deceptive player that can dominate a defender like Banks. If Banks has progressed this offseason, he could put the clamps on Autman-Bell with his explosiveness, fluidity, and size.

The ACC sees its first action this week, and one of the first intra-conference matchups is between North Carolina and Virginia Tech — set to air on Friday [September 3] at 6 PM on ESPN. The Hokies will look to rebound after their first bowl-less season since 2013. Meanwhile, Sam Howell will try to keep putting up video game numbers on his quest to become the No. 1 overall pick. Which battles demand attention in this contest?

The North Carolina Tar Heels will miss Chazz Surratt at the second level. However, they won’t be left without any playmakers in that range. Jeremiah Gemmel returns as the team’s defensive leader, and he’s poised for a potential breakout season in 2021. Gemmel has decent size at 6’1″, 225 pounds, with solid short-range burst and instincts. He had 78 tackles, 2 interceptions, 4 deflections, and 1 forced fumble in 2020.

Gemmel, the team’s chief producer from 2020, will presumably be tasked with covering Virginia Tech TE James Mitchell on more than a few snaps. In fact, it’s an assignment Gemmel is familiar with. Gemmel held his own against Mitchell on a few occasions last season. Mitchell’s athleticism in space is always challenging, but Gemmel has the traits to combat it. Whoever wins this matchup could start to rise up draft boards in 2021.

This matchup is more about Chamarri Conner than anything else. The 6’0″, 205-pound Hokies defender — who has 3 interceptions and 12 interceptions over the past two seasons — could be one of the better natural slot defenders in the 2022 NFL Draft with his physicality, short-range burst, and instinctive use of space.

For North Carolina, this is about seeing who can replace Dyami Brown and Dazz Newsome as Howell’s top weapons. Josh Downs is listed as UNC’s starter in the slot, but there’s also Justin Olson, Khafre Brown, Emery Simmons, Antoine Green, and Beau Corrales, among others. For a Hokies secondary that also boasts Jermaine Waller, the Tar Heels’ receiving unit has a lot to prove.

On Saturday at 3:30 PM ET, the No. 1-ranked Alabama Crimson Tide take on the 14th-ranked Miami Hurricanes on ABC. The Hurricanes would have fared better against Alabama last year, but they still have some returning contributors from 2020. D’Eriq King‘s experience will be a worthy asset, but do the Hurricanes have enough talent on defense to make life uncomfortable for Bryce Young in his first start?

Only one team gets to face Alabama’s offensive line in our Week 1 college football matchups, and that unlucky team is Miami. The Hurricanes will no doubt miss Jaelan Phillips, Gregory Rousseau, and Quincy Roche. Jahfari Harvey and DeAndre Johnson could help fill the void, but the brunt of the responsibility will fall on Nesta Jade Silvera’s broad shoulders.

Silvera is an underrated 1-technique with an exciting mix of explosiveness and power. With 8 tackles for loss on record in 2020, he’ll be tasked with carrying that production over into 2021. If he can hold his own against Emil Ekiyor — another wide and powerful Alabama blocker — he could jump-start his ascension toward the 2022 NFL Draft.

There tends to be a diminishing return toward draft relevance as quarterbacks stay in college for longer periods of time. King is now entering his sixth collegiate season, and more likely than not, he’ll remain a fringe draft prospect. A strong performance against Alabama can help the dynamic quarterback, but he’ll face a lot of resistance, and the secondary may offer the most trouble.

Jordan Battle, in particular, is a key defensive playmaker for the Crimson Tide in 2021. Battle showed immense promise last year and enters 2021 as one of the 2022 NFL Draft’s rising prospects. He’s a great athlete with a strong frame, but he also has exciting route-recognition ability and instincts. If King isn’t on top of his game, Battle might feast on his mistakes, supported by a strong DB group.

This may be the most anticipated of the Week 1 college football matchups. Clemson gets the most hype as a blue-chip program, but Georgia is a strong team in its own right. With JT Daniels coming off his first full offseason as the starter — and several high-level transfers coming in — Georgia may be poised to compete. Starting with a win against Clemson would be big. Which players can make that happen?

There’s an element of revenge in this one for Derion Kendrick, who began his career with Clemson before being unceremoniously dismissed this past February. Kendrick entered the transfer portal and ultimately decided to join the Georgia Bulldogs. Kendrick is long and physical and has early-round upside. But he’ll have to use all of that length and physicality against the resurgent Justyn Ross.

Medically cleared after missing the 2020 season with a career-threatening spinal injury, Ross is no doubt hungry for production. The 6’4″, 205-pound playmaker kicked off his collegiate career with a 1,000-yard season. Presumably healthy and fresh, Ross has the athleticism and size to earn the advantage over Kendrick. Both of these players need a strong season to rise on draft boards, so this matchup holds plenty of weight.

On the other side, Georgia cornerbacks Te’Cory Couch and Tyrique Stevenson will have their hands full with John Metchie III — but both have the athletic traits to put up a fight.

Georgia is an incredibly talented squad, but they’ll have their work cut out for them in the trenches. The Clemson Tigers have one of the best, if not the best defensive line in college football. Bryan Bresee and Myles Murphy are perhaps the most storied starters, but Tyler Davis also deserves hype. Davis is eligible for the 2022 NFL Draft, and he has the combination of natural leverage, twitch, and explosiveness to be an early-round pick.

Jamaree Salyer has played more tackle than guard in years past, but the Bulldogs may want their most trustworthy lineman on the interior for this matchup. Salyer has great size at 6’4″, 325 pounds, with experience on the interior if needed. Salyer is athletic and powerful with aggressive hands, and he poses a challenge for Davis. Davis’ explosiveness alone will be tough to stop, but Salyer is a formidable opponent for him.