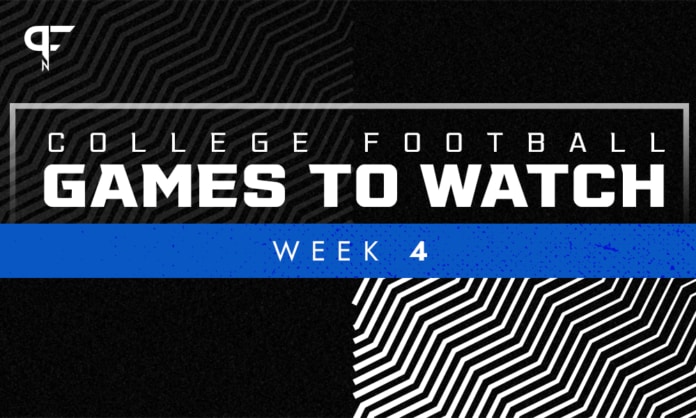 With multiple must-watch matchups amongst the games, which should you be anticipating on the Week 4 college football schedule?

Ignore the fact that Texas A&M has won the last nine clashes between these two programs — there’s a reason it’s called the “Southwest Classic.” Seven of the nine matchups that have taken place at AT&T Stadium have ended as a one-score game. Meanwhile, three have gone to overtime. It’s the epitome of a classic.

If you like high-scoring college football games, this one is likely to be for you. Just three teams have failed to score 20+ points when Arkansas and Texas A&M have met in Arlington. The 2009 and 2010 Aggies and 2018 Razorbacks are the point-scoring party poopers, although it’s likely that the 2018 team was just exhausted from their role in a 93-point spectacular during the 2017 season.

Despite all the defensive talent on show on Saturday, there should be an offensive explosion again. Arkansas averages over 40 points per game, while the Aggies’ 28-point average is dragged down by their calamitous lack of creativity against Colorado.

There’s an absolute ton of NFL Draft talent showcasing in AT&T Stadium on Saturday afternoon. This might be the most talented Texas A&M team of recent times, and Arkansas doesn’t exactly lack in that regard either.

For all the talk of offensive explosion in the introduction, it’s a defensive player who will draw the attention of NFL scouts. Arkansas safety Jalen Catalon could be the first Arkansas defensive player selected in the first round since 2007. He’s off to a hot start this season, registering 28 tackles, 3 pass deflections, and 2 interceptions through three games.

While his coverage ability is impressive, Catalon’s “hair on fire” approach to every play makes him a force in the ground game. On Saturday, he’ll meet Texas A&M running back Isaiah Spiller in the alley for a mouthwatering matchup. Spiller is our RB1 in the 2022 NFL Draft class, showcasing incredible vision and footwork while being able to get the job done between the tackles or as an outside rusher.

In years gone by, you’d take one look at the slate of college football games and write off Clemson and North Carolina Slate as a comfortable Tigers triumph. You’d usually be justified in this approach. Clemson has, after all, won the last eight clashes. To steal a social media saying — “it isn’t even close.”

These aren’t the Tigers you’ve become accustomed to, however. Dabo Swinney’s team has been beset by offensive miscues early in the season. Georgia held them to just a field goal, and more surprisingly, Georgia Tech restricted them to 14 points.

Meanwhile, NC State has averaged 33 points, putting up 45 on both South Florida and Furman. Of course, those defenses have nothing on the Clemson unit they’ll face on Saturday. Yet, if they can control the game on the ground and get into an early lead, they might give Clemson their first defeat in the matchup since 2011.

Much of that potential success rests with one of the top running backs in the 2022 NFL Draft class. Zonovan “BAM” Knight has formed a powerful one-two punch with fellow running back Ricky Person Jr. As a result, the Wolfpack are averaging 181 rushing yards per game.

Knight displays incredible contact balance, patience, and vision as a runner. However, he also possesses impressive acceleration and lateral agility. The combination of all these traits makes “BAM” a dangerous runner who is difficult to stop either at the line or in the open field.

While the Clemson offense has stuttered, the defense has been as advertised before the season. This unit is as good as the 2018 defense that helped secure a national championship and had three players drafted in the first round of the 2019 NFL Draft.

While the majority of the defensive line isn’t eligible this year, Clemson has a genuine first-round prospect in Andrew Booth Jr. The athletic cornerback has shown off his insane ball skills in previous seasons. But he has demonstrated an all-round ability to be disruptive through the first three games of the college football season.

As the Malik Willis Heisman and QB1 campaign develops steam, Liberty returns to the place where it all began. Willis’ performance as Liberty shocked Syracuse in the Carrier Dome last October propelled the creative dual-threat quarterback into the national spotlight and set the Flames on a journey that ended with a Cure Bowl win over Coastal Carolina.

Whereas Liberty shocked Syracuse last year, they go into this game as a favorite, having won their first three games of the season in relatively comfortable style. Although the Orange have two wins to their name, their defeat to Rutgers is a more accurate representation of their current program.

On paper, the game could be relatively close. Liberty averages 433.3 yards of offense versus Syracuse’s 423.7 yards per game this season. Meanwhile, the Syracuse defense has averaged 225.3 yards allowed per game against 234.0 for the Flames. Regardless, games aren’t played on paper, and one man gives Liberty a distinct advantage over their Power Five opponents.

2022 NFL Draft prospects to watch in Liberty at Syracuse

Without Willis, it’s unlikely that people are queuing up to watch this college football game on Friday night. Arguably, the Wake Forest-Virginia game that kicks off an hour before should command more attention. But the Liberty QB is a difference-maker, an entertainer, and is making himself increasingly difficult to ignore as an NFL Draft prospect and Heisman contender.

There aren’t many quarterbacks with the arm strength and arm talent that Willis possesses. There simply isn’t another quarterback as dynamic and creative on the move in this class. It’ll be interesting to see how his improved decision-making ability stands up against a defense that has a future NFL player in the secondary. Because if it does, there’s little stopping Willis right now.

That aforementioned defensive player is Syracuse cornerback Garrett Williams. Trill Williams was a firm favorite amongst our draft analysts last draft cycle. Now another Williams is poised for similar affection. Although he’s only a redshirt sophomore, Williams’ movement, ball skills, and football intelligence could see him fly up draft boards this fall.

Although our Week 4 college football games to watch piece has a distinctly Texan feel to it, the battle for the Chancellor’s Spurs is undeniably the best game in the noon slate. The Longhorns bounced back from a dismal defeat to Arkansas with a shutout win over Rice in Week 3, while the Red Raiders come into their biggest rivalry game as one of the few remaining undefeated college football teams.

What is the chance of them springing a surprise on Saturday afternoon? History is against Texas Tech, with Texas winning the last three matchups. Furthermore, the Longhorns have a 53-17 overall record in head-to-head clashes. Their 58-7 winning margin since 1999 is the biggest in the rivalry, and Texas has the longest win streak with eight wins between 1958 and 1966.

Each team could make a case for why they should win. We’ll leave that up to the respective fan base to decide. For a neutral college football fan, this is one of the games to watch because it features two of the highest-scoring offenses in college football. Last year’s clash ended 63-56. Who doesn’t love an absolute shootout on a Saturday afternoon?

2022 NFL Draft prospects to watch in Texas Tech at Texas

If the game descends into a shootout, expect to see plenty of Texas Tech wide receiver Erik Ezukanma. While the Red Raiders have traditionally sprayed it around their receivers, their 6’3″, 220-pound NFL Draft prospect leads the team in receptions, receiving yards, and yards per catch.

As you’d expect from a receiver of his size, Ezukanma has the hands and physicality to dominate at the catch point. Additionally, he possesses deceptive athleticism, elusiveness, and contact balance. As a result, he’s a genuine after-the-catch threat who is almost unstoppable in the open field.

While it will be the Texas cornerbacks lined up across from Ezukanma, the man on their defense who has the range and physicality to keep tabs on him on Saturday afternoon is linebacker DeMarvion Overshown. A former safety, Overshown has uncommon size and speed for a second-level defender, showcasing sideline-to-sideline agility while being able to deliver a hit from whatever direction he approaches a ball carrier.