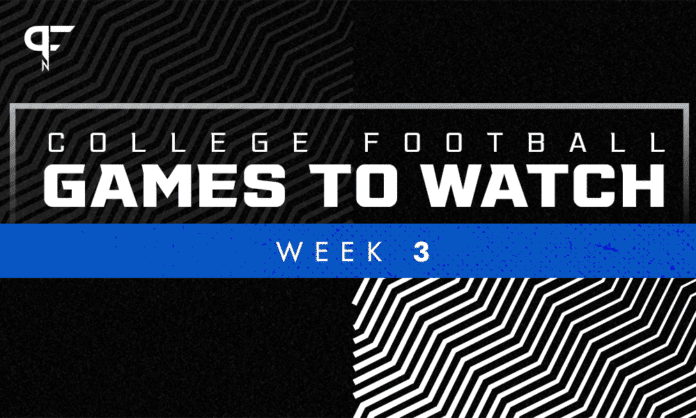 With multiple must-watch matchups amongst the games, which should you be anticipating on the Week 3 college football schedule?

Close conclusions, playoff permutations, and unimaginable upsets, last week’s college football games had a little bit of everything that makes the sport so special. Ready to do it all over again? Gather your breath, gather your friends, and get acquainted with the games and NFL Draft prospects to watch in the Week 3 college football schedule.

The Week 3 slate of college football games kicks off with a Thursday night matchup between Ohio and Louisiana. The two Friday games are headlined by UCF’s trip to Louisville, while Nebraska and Oklahoma open up a sensational Saturday schedule that concludes with Hawaii entertaining San Jose State.

One of just three college football games in Week 3 that features two ranked teams, Alabama travels to “The Swamp” to take on Florida in a rematch of the 2020 SEC Championship Game. The Crimson Tide crept past the Gators in a close one less than 12 months ago, but it’s two very different teams that will face off in Florida.

After Kyle Trask lit up the SEC for the Gators last season, there’s a quarterback controversy brewing inside Ben Hill Griffin Stadium. Emory Jones has started both games, but Anthony Richardson has looked the more explosive playmaker. However, his status remains unclear after sustaining a hamstring injury in Saturday’s win over USF.

Whoever starts under center, Florida’s offense looks significantly different from last season. They’ll aim to control the ground game while their defense has to somehow hold Bryce Young in check. Although Alabama lost a ton of offensive talent to the NFL, Nick Saban’s Crimson Tide continue to roll on offense. Meanwhile, their defense is as good as ever.

2022 NFL Draft prospects to watch in Alabama at Florida

It’s difficult to envision anything other than a comfortable Alabama win on Saturday. The Crimson Tide have won the last seven matchups against the Gators, including four SEC Championship Games. Florida hasn’t overcome Alabama since 2008. Furthermore, all but one of those defeats have been a blowout.

If Florida has any chance of success on Saturday, they’ll need to dominate one particular clash of 2022 NFL Draft prospects. Alabama offensive tackle Evan Neal has made an exceptional start to a pivotal year for his draft stock. The top offensive lineman and Alabama prospect on our Top 50 2022 NFL Draft Big Board has transitioned tremendously to left tackle after playing on the right side during his first two seasons.

Neal has provided Young the time to excel through two games while showcasing his savage nature on multiple plays. However, the Alabama OT will face his biggest test of the season so far this week against Florida EDGE Brenton Cox Jr. The redshirt junior led the Gators in quarterback hurries last fall. Despite a slow start to the season, his explosion and arsenal of pass-rush moves should provide a stern challenge for Neal.

The College GameDay team will be at Beaver Stadium this Saturday, which should tell you all you need to know about the anticipation for this clash between Auburn and Penn State. The entertainment on the pitch will intensify the atmosphere as the Tigers face the Nittany Lions’ “Whiteout.”

The two teams have only met twice before, sharing the spoils 1-1, and it’s anyone’s guess as to who comes out on top this time around. Both teams are unbeaten ranked ahead of the game. Auburn has the largest scoring margin in the nation after turning over Akron and Alabama State in their first two games.

Meanwhile, Penn State has one of the best turnover margins in the nation. The Nittany Lions also come into this matchup with the sixth-best win streak in all of college football. Their win over Ball State was their sixth consecutive victory dating back to last season.

2022 NFL Draft prospects to watch in Auburn at Penn State

Penn State had their most successful draft class since 2003 last year, with Micah Parsons and Odafe Oweh earning first-round selections. While repeating that feat in the 2022 NFL Draft is unlikely, in Rasheed Walker, they have an offensive tackle prospect who features on our Top 50 Big Board.

Walker has the prototypical size to play tackle in the NFL while displaying ample athletic ability. His violent hands help him act upon a mauler mentality to be a potent threat both as a run blocker and pass protector. He could have been an early-round prospect back in April.

The Nittany Lions OT faces a difficult day dealing with an ascending NFL Draft prospect in Auburn’s Colby Wooden. The 6’5″, 278-pound defensive lineman has the versatility and athleticism to be a threat from any alignment. The redshirt sophomore was productive last season and has gotten off to a lightning-fast start this season.

A two-hour car ride (about 100 miles) separates Purdue University and Notre Dame. However, the gulf in class between the two teams has been far greater than the distance between them in recent years. Although the Boilermakers have had their share of wins in big college football games, they’ve failed to beat the Fighting Irish since 2007.

That could all change this Saturday. While it’s easy to say they should beat teams like Oregon State and UConn, the Boilermakers have found ways to lose these “easy” out-of-conference games in the past. Yet, they currently have a top-30 scoring offense and defense.

Furthermore, they face a Notre Dame team that has struggled so far this season. The Fighting Irish might be 2-0, but an overtime win over Florida State and a last-gasp victory over Toledo is a far cry from last season’s assault on the ACC.

Although Jack Coan appears to have provided an upgrade over Ian Book in the passing game, the Notre Dame defense has given up far too many big plays. They face one of the best big-play threats in the nation in Purdue receiver David Bell, who could be the difference-maker for the Boilermakers on Saturday.

2022 NFL Draft prospect to watch in Purdue at Notre Dame

While the defense has struggled to limit big plays, the loss of practically their entire offensive line has been the biggest issue for Notre Dame so far. They’ll have their own test this weekend, with the Grecian Goliath George Karlaftis dominating opposition offensive lines so far this season.

Many wondered if Karlaftis could return to his freshman form following a disrupted 2020 campaign. He answered those concerns in style in Purdue’s season opener, bullying Oregon State while registering half a sack. Against UConn, he forced a fumble and broke up a pair of passes. Long, strong, and with deceptive speed for his size, Karlaftis will be problematic for Notre Dame all day long.

Between Karlaftis and Kyle Hamilton, this college football game contains two of the best defensive players in the 2022 NFL Draft. While Karlaftis is the 12th-ranked player on our Top 50 Big Board, Hamilton is our top-rated player in the class. His insane blend of athleticism, size, and versatility make the Notre Dame safety a disruptive defensive playmaker of the highest caliber.

If Indiana hadn’t fallen to Iowa so spectacularly in Week 1, we could be talking about this game as a clash of top-10 college football teams in the country. Instead, let’s consider it a fantastic opportunity for Cincinnati to go on the road to a Power Five program and make another statement to the CFB Playoff committee.

The Bearcats have been electric to start the 2021 college football season. While it’s easy to conclude that putting 40+ points on a MAC team and Murray State isn’t impressive, Miami (OH) was the MAC champions just two seasons ago. Furthermore, they put up a spirited fight against Minnesota in Week 2.

Although Indiana lost to Iowa and is no longer ranked, let’s not forget that this team finished last season 12th after a 6-2 season. They won’t be a pushover for the Bearcats, and there’ll be plenty of competitive matchups all over this college football game.

2022 NFL Draft prospects to watch in Cincinnati at Indiana

Cincinnati has a vast array of defensive talent to watch out for in this college football game, including one of the best cornerbacks in the nation. However, no prospect has more to gain from this matchup than Bearcats quarterback Desmond Ridder.

Considered a mid-round prospect by many last year, Ridder returned to Cincinnati this year and has lit it up early on. Through two games, he’s completed 72.3% of his passes and thrown for 538 yards, averaging 11.4 yards per pass. Arm strength has never been an issue, but if Ridder keeps making insane downfield throws while showcasing accuracy and improved decision-making, he’s going to put himself into early-round contention.

Ridder has thrown just 1 interception so far this season, but Tiawan Mullen will be aiming to inflate those numbers on Saturday. Although he lacks prototypical NFL size at 5’10” and 180 pounds, the Indiana cornerback has proven impactful in all phases of the game. His 3 interceptions and 17 pass deflections so far in his career are testaments to his ball skills. Furthermore, he’s ferocious against the run and is adept at blitzing the quarterback from the cornerback position when required.