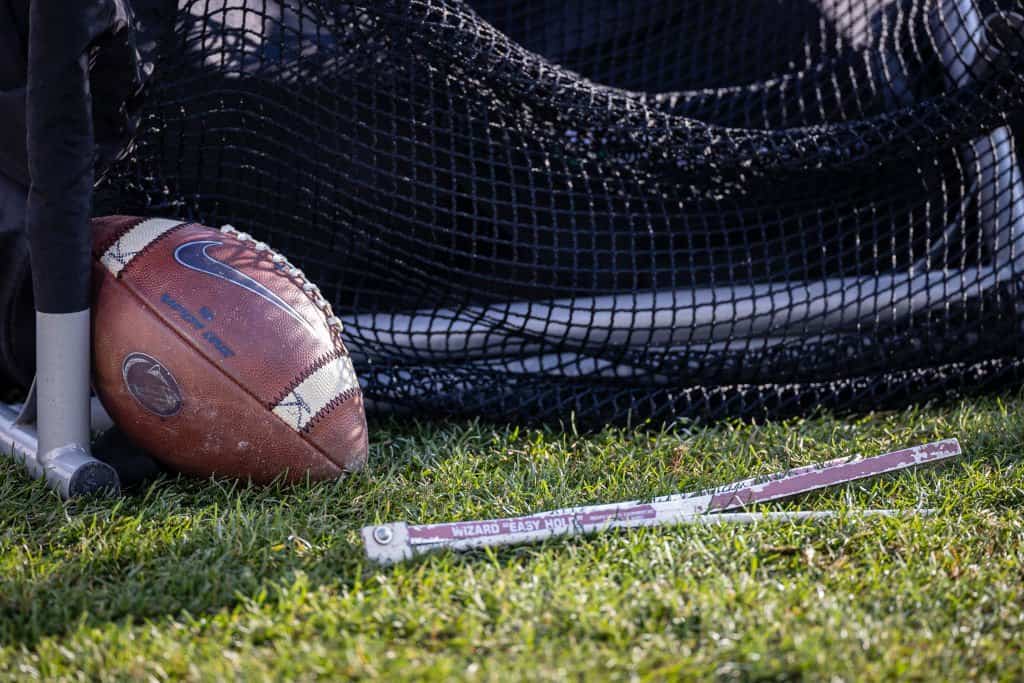 STATE COLLEGE, PA - DECEMBER 12: A detailed view of a Nike branded football with a Penn State Nittany Lions logo on the sidelines near a kicking net and tee during the second half of the game between the Penn State Nittany Lions and the Michigan State Spartans at Beaver Stadium on December 12, 2020 in State College, Pennsylvania. (Photo by Scott Taetsch/Getty Images)
What's in this article? Click to show
What college football bowl games are on today?
Myrtle Beach Bowl | Appalachian State vs. North Texas
2020-21 College Football Bowl Schedule

Despite the most disrupted year in recent history, we’ve reached the most wonderful time of the year. There may not be as many, and some teams have opted to decline their invite, but college football bowl season is upon us. For two weeks, we have football almost every day, culminating with the national championship on Monday, January 11th. Which teams are in action, and which college football bowl games can you watch on TV today?

What college football bowl games are on today?

Below is a listing of college football bowl games that you can watch on TV today. Please note that all start times are in ET time zone.

There is just one game to kick off college bowl season today. However, this will not only be an exciting matchup but also a historical event. For today marks the inaugural Myrtle Beach Bowl, a college bowl game some years in the making.

Back in 2013, the Group of Five teams decided that they’d had enough of the Power Five teams manipulating bowl games. Frustrated that their teams were shunned from the major college football bowls, they created their own. The Myrtle Beach Bowl was born, pitting two teams from three conferences against each other. Over a six-year cycle, the Sun Belt, Conference USA, and the Mid-American Conference will rotate representation.

In this year’s Myrtle Beach Bowl, the Sun Belt is represented by the Appalachian State Mountaineers. They will face off against the North Texas Mean Green of Conference USA. The two teams have had wildly different seasons. However, it should still be an interesting matchup between two high-octane offenses.

By their own high standards, Appalachian State has had a disappointing season. After four double-digit winning seasons in the last five, they ended the 2020 Sun Belt season with an 8-3 record. However, two of those losses came to ranked opponents, and the other came at the hands of an impressive Marshall team. The Mountaineers have the 40th ranked scoring offense and the ninth most rushing yards per game this college football season.

For North Texas, it has been just as disappointing. The Mean Green have now won just four games in consecutive seasons after back-to-back nine-win seasons. Despite their record and replacing quarterback Nathan Rourke, they finished as the 24th best scoring offense, 22nd ranked passing offense, and had the 13th most rushing yards per game.

With two potent offenses, we should see plenty of points. However, there is a huge defensive disparity between the two, which should decide the game. Appalachian State has held its opponents to under 20 points per game, whereas North Texas has allowed an average of 41.3 points per game.

Appalachian State has also got a historical advantage in terms of bowl success. The Mountaineers have won all five of their bowl game appearances. Meanwhile, the Mean Green have been to nine bowl games with a 2-7 record. Their last success was in the Heart of Dallas Bowl at the end of the 2013 season. That drought should, unfortunately, continue in this college football bowl game today.

Players to watch for in today’s college football bowl game

Disappointingly for fans of shifty wide receivers, North Texas’ star pass-catcher Jaelon Darden declared for the NFL draft and therefore won’t play in today’s college football bowl game on TV. A speedy, reliable receiver, Darden led the nation in touchdowns in 2020 and was level with Heisman contender DeVonta Smith for the second-most receiving yards per game this season.

Tony Pauline highlights two NFL draft prospects from Appalachian State in his latest big board for Pro Football Network. He has a fifth-round grade on cornerback Shaun Jolly. Pauline also has a draftable grade on linebacker D’Marco Jackson.

At 5’9,” Jolly doesn’t have the length that most NFL teams covet. However, he does have good ball skills, snagging five interceptions in 2019. Jolly would transition well to play slot corner in the NFL. As a junior, he can return in 2021.

Games in January before the college football playoffs begin

Oliver Hodgkinson is an NFL draft and NFL analytics contributor for the Pro Football Network. You can follow him on Twitter at @ojhodgkinson.