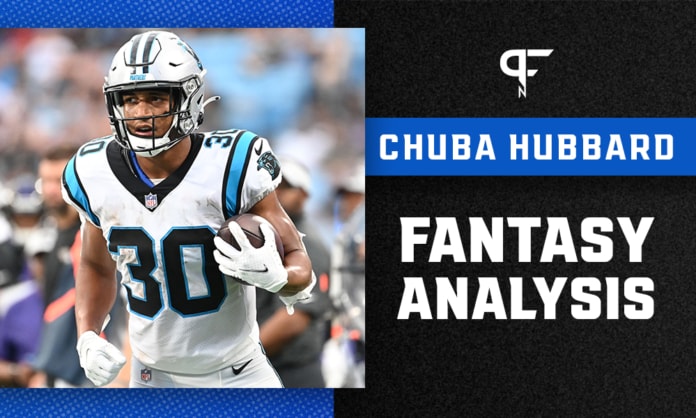 Chuba Hubbard Fantasy Analysis: Should you claim off the waiver wire?

Chuba Hubbard should be the top waiver wire priority in every format after the injury to star running back Christian McCaffrey.

By Jon Helmkamp
September 27, 2021
What's in this article? Click to show
Is Chuba Hubbard’s fantasy value worth a waiver claim?
Hubbard’s production in college
2020 was a letdown season for the Oklahoma State RB
Hubbard boasts plenty of upside

Chuba Hubbard finds himself in line to have a heavy workload after Christian McCaffrey injured his hamstring on Thursday night. As if fantasy managers need more grey hairs, the consensus first overall selection in fantasy drafts this year is set to miss a few weeks while his hamstring heals. Hubbard has a golden opportunity to secure a large role in Carolina’s offense, at least in the short term. Should you claim Chuba off the waiver wire?

Is Chuba Hubbard’s fantasy value worth a waiver claim?

In short? Yes. Running backs are hard to come by, and Hubbard will now be the next man up for a Carolina offense that has been surprisingly high-powered. While it hasn’t led to a ton of points, newly acquired quarterback Sam Darnold has resuscitated his career in Carolina and led the offense to the 10th-most yards per game (390.3) in the NFL through three weeks.

Hubbard looked promising after McCaffrey went down, logging 52 rushing yards on 11 carries (4.73 yards per carry) while tacking on an additional 3 receptions on 5 targets. There’s plenty of reason for optimism about his fantasy outlook. Hubbard needs to be the top waiver priority in all formats. He has the opportunity to provide huge value for the next few weeks and could carve out a serviceable flex role even after McCaffrey’s return.

If Hubbard had declared for the NFL Draft in 2020, there’s a good chance he would have been selected in the first three rounds. Instead, he returned to Oklahoma State for one more season, which ended up hurting his potential draft stock.

In 2019, Hubbard had a monster season, rushing for 2,094 yards and 21 touchdowns while also showing abilities in the passing game with 23 receptions and 198 receiving yards. He was widely thought of as one of the top running backs in all of college football and flashed truly special top-end speed.

2020 was a letdown season for the Oklahoma State RB

Many thought Hubbard could come back and pad his résumé in 2020, but it sadly didn’t go his way. After averaging 6.4 yards per carry in 2019, he averaged only 4.7 in seven games in 2020. He finished the season with just 625 rushing yards.

If you split the 2020 season in half, you have two vastly different stories.

To begin the season, Hubbard was a workhorse back seeing a huge workload while displaying increased physicality from his 2019 tape. He ran for 550 yards in five games, logging more than 20 carries in each of those five contests.

Hubbards managed only 14 carries for 75 yards in his next two games before an ankle injury sidelined him. Then, he decided to opt out prior to Oklahoma State’s regular-season finale to begin preparing for the NFL Draft.

The decreased production and injury concerns dropped Hubbard to the fourth round of the 2021 NFL Draft. Now, the once highly productive running back will have a fresh opportunity to make a name for himself.

Hubbard finds himself poised for plenty of fantasy production, at least for the next few weeks. The Panthers have the Cowboys, Eagles, and Vikings next on their schedule, which is plenty appealing.

If you’re lucky enough to land Hubbard on waivers, he’s a locked-and-loaded flex play with RB2 upside. Go get him.

Jon Helmkamp is a fantasy football and NFL contributor for Pro Football Network. You can find him on Twitter: @JonHelmkamp.and find more of his work here. Don’t forget to listen to the PFN Fantasy Football podcast and check out our free fantasy newsletter.