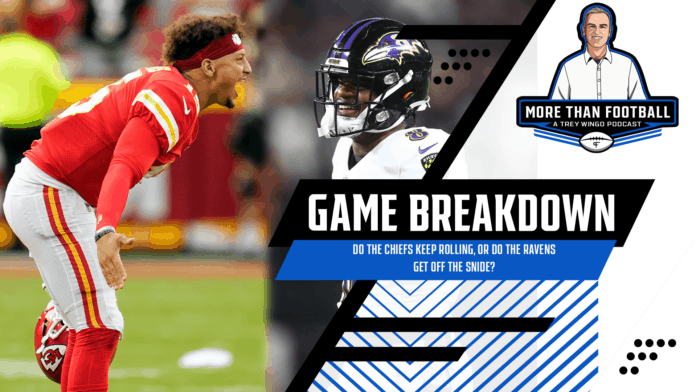 On the More Than Football podcast, PFN's Chief NFL Analyst Trey Wingo previews the matchup between the Baltimore Ravens and the Kansas City Chiefs.

By Lucas Ellinas
September 19, 2021
What's in this article? Click to show
Chiefs vs. Ravens Preview: Baltimore has a serious injury problem
The Kansas City Chiefs’ defense isn’t great, but it doesn’t matter
History is on Kansas City’s side in this game

Sunday night’s game between the Kansas City Chiefs and the Baltimore Ravens is one of the week’s premier matchups. On this week’s More Than Football Podcast, PFN’s Chief NFL Analyst Trey Wingo and host Brett Yarris preview Chiefs vs. Ravens.

Chiefs vs. Ravens Preview: Baltimore has a serious injury problem

Every year, a team is hit hard by injuries. Last season, it was the San Francisco 49ers. However, Wingo points out that it’s rare that a team is hit so badly at a single position like Baltimore is. According to him, the team’s injuries at running back mean “the way the Ravens are set up for success is now a problem.”

The team wants to play defense and run the ball, and the running game is no longer going to be the force it might have been. Instead, they will now need to rely on Jackson’s arm. The Ravens haven’t tried to do that so far in his career, which is why Jalen Hurts has more 300-yard games in five starts than Jackson has during his three years in the NFL.

And while Wingo believes Jackson is an excellent quarterback, there are definite questions regarding whether the Ravens can win using a pass-heavy offense. In fact, Wingo suspects that those concerns might be why Baltimore hasn’t given him a new contract yet.

While the Ravens are trying to figure out how their offense is going to work this season, their opponents this week know exactly who they are. To start, it’s clear that the Chiefs’ defense isn’t the best unit in the NFL. However, that really isn’t their goal. As Wingo says:

“You’re not asking the Kansas City defense to carry you; you’re asking them to not kill you.”

And that’s exactly what happened in their opening game against the Cleveland Browns. They did just enough to give Patrick Mahomes and the offense the chance to pull out the win.

History is on Kansas City’s side in this game

Speaking of Patrick Mahomes, Wingo points out that this weekend is something of a perfect storm for him. The Chiefs are 11-0 with Mahomes as their starter in September.

In those games, Kansas City has averaged 34 points per game, and Mahomes himself has 35 touchdowns, more than 3,600 yards, and zero interceptions during that period. Additionally, Mahomes is 8-0 in primetime, excluding one loss in which he got hurt, and 8-0 against AFC North teams.

Wingo acknowledges that Baltimore might still win this game despite those numbers. However, he ultimately isn’t willing to bet on Mahomes losing in September until he actually sees it happen.