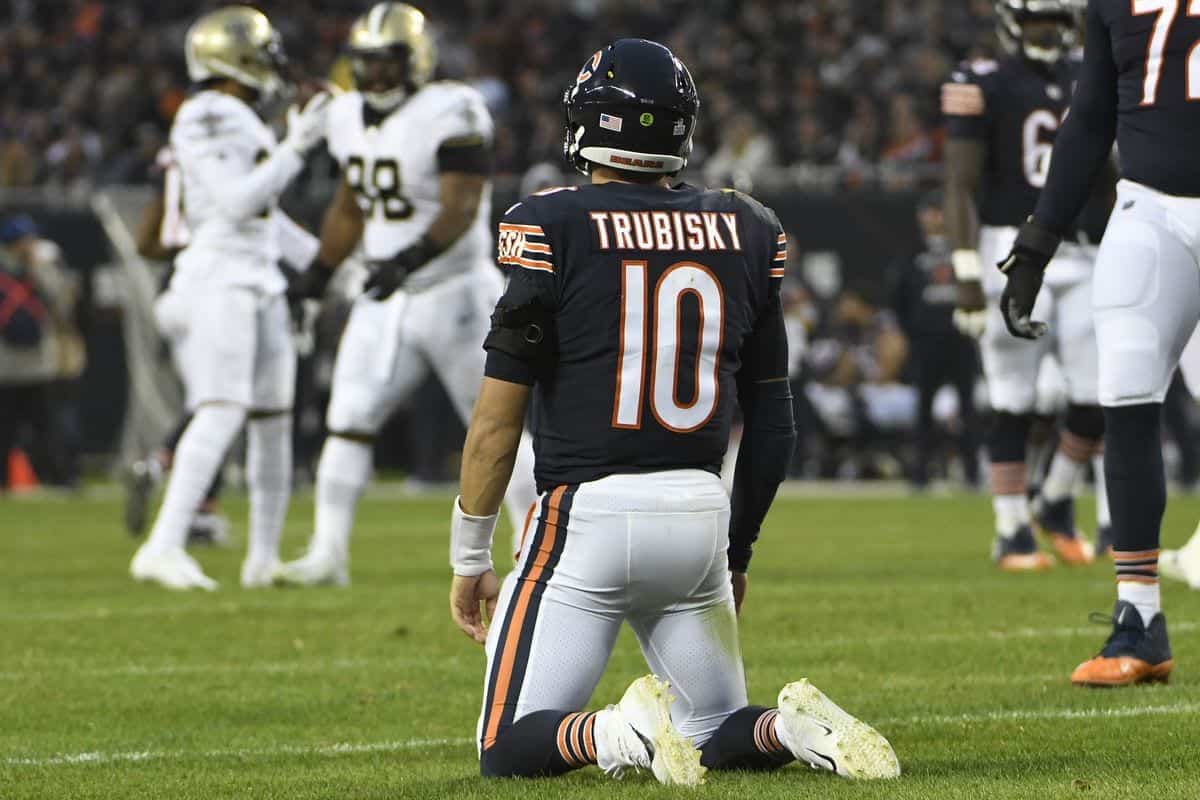 Photo Credit: David Banks/Getty Images
What's in this article? Click to show
The case for offensive line
The case for wide receiver or tight end
Conclusion

After finishing 12-4 in 2018, the Chicago Bears entered 2019 with lofty expectations. An 8-8 season was not what head coach Matt Nagy had hoped for in 2019, and to compound the anxiety, the Bears have few draft picks to work with in the 2020 NFL Draft to bolster the roster. Only two of those picks are on the first two days of the draft as it currently stands (#43 and #50, and then not again until the fifth round). Let’s dive into a Bears draft prop bet that has favorable odds as of current writing despite the dearth of capital.

The case for offensive line

The Bears had a subpar offensive line in 2019, finishing bottom-half in sacks allowed, and when they did allow sacks, it was the 3rd fastest time to the quarterback in the NFL. To make matters worse, the Bears were 6th-worst in rush yards per game, and tied for 3rd-worst in rush yards per carry. To say the Bears offense sputtered last year would be an understatement.

Not only does the Bears offensive line need a rejuvenation, but when you look at the Bears first two selections in the second round, you start to see value and draft need align more favorably for the club. The Bears may be a tad outside the wheelhouse of Michigan center Cesar Ruiz, but it wouldn’t be shocking to see an interior lineman slide down the draft.

With only two picks in the first four rounds, it would behoove the Bears to move down — in which case, I think it presents even better value for guys like LSU’s Lloyd Cushenberry, Temple’s Matt Hennessy, and Wisconsin’s Tyler Biadasz.

In a vacuum, I believe the Bears value OL > CB if the value is similar — the main threat to our bet would be maneuvering down the draft board to have a CB with pronouncedly more value than the OL, or the Bears being comfortable with multiple interior guys and letting the prospects fall to their next second round pick.

This is a deep cornerback class, but it’s entirely possible that the “second wave” of corners happens before the Bears’ first pick — when the next best corners on the board are Noah Igbinoghene and Damon Arnette, then the aforementioned OL’s value enhances for the purposes of this Bears draft prop bet.

I don’t see much value for a “true guard” for the Bears’ two second-round picks, but if they were to project a tackle to be a better fit at guard (or want to use the young blood at tackle with the idea of moving an existing person on the roster inside), then it only increases our betting angle as you could see 4-5 offensive tackles in that area presenting value.

The case for wide receiver or tight end

Allen Robinson II was targeted a whopping 154 times in 2019. The only other 100+ target person on the Bears roster? Running back Tarik Cohen — and those 104 targets resulted in a dismal 456 yards. Anthony Miller should likely see a boost in targets (85 in 2019) but there’s no Taylor Gabriel (released) and Miller saw 58.8% of his snaps come from the slot.

Whatever Bears quarterback emerges from their chrysalis will need another weapon in the passing game, and I think that’s most likely in the form of a boundary wide receiver. This wide receiver class is deeper than Chicago pizza so they can get tremendous value in the form of a pass catcher whether they stay put or move down.

I’ll admit the tight end is a distant third possibility compared to interior OL and wide receiver, but Jimmy Graham had his worst statistical year since his rookie year and the rest of the TE bunch in Chicago are complementary players. If the Bears move down a few times with their second-round picks, they may be more on the landing pad of Notre Dame TE Cole Kmet: the favorite to be the first TE drafted. The Bears eventually need a long-term solution at tight end.

SBD’s NFL betting page listed Chicago as one of the best teams to bet against the spread in 2019, failing to cover in three-quarters of their games. With the Bears having produced the 4th worst offense last season in both points scored (298) and total yards (4,749), while netting a paltry 4.7 yards per play (per pro-football-reference.com), it’s a safe assumption they’ll be drafting for the offense.

Let’s not overthink things: The Bears had the 4th worst scoring offense in the NFL and the 4th best scoring defense. Of their top five needs, three are offensive positions (WR, TE, interior OL) versus two defensive positions (CB, S). After a season of top-five defensive play to not even result in a playoff berth, the pendulum will swing in favor of the offense. Even at a coin-flip estimation, the offense would have better profitability from a betting standpoint.

It’s safe to lean offense +110 when looking at prop bets on which side of the ball the Bears will draft first. Take that bet and then be sure to follow the rest of the betting team @PFNBets for all of our plays and analysis.