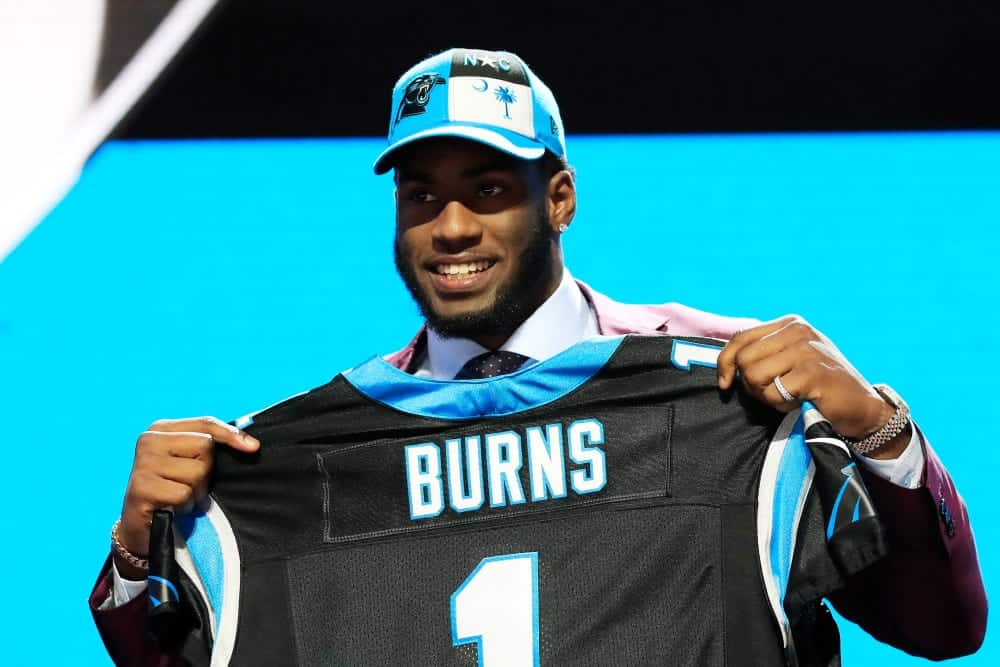 In the 2019 NFL Draft, the Carolina Panthers secured a couple of quality pass rushers, and a potential franchise left tackle. However, open roster spots such as safety and slot cornerback remain. In this article, we use hindsight to take a look back at every selection from the Panthers 2019 draft, and see if the Panthers left greater value and better talent on the board.

No need to make a change here. We named Brian Burns as one of the best picks of the entire first round. Although he was the fourth edge rusher off the board, Burns was the top edge prospect for many draft experts and scouts. Burns will lead the next generation of pass rushers in Carolina.

When I heard the announcement of the Panthers’ trade-up to pick 37, Cody Ford‘s name immediately came to mind. Not only was he an expected first-round selection, but some draft experts even had him rated as the number one offensive tackle in the draft. Ford possesses a higher floor and is a more day-one-ready prospect compared to Little. While Little has the physical talent and upside to match Ford, the Ole Miss product shows more inconsistencies on tape, and therefore is a more volatile prospect.

The justification for drafting Little over Ford is the left tackle position. Little started every game at LT since winning the job his freshman season. While Ford showed the ability to play in multiple positions across the offensive line, including left and right guard as well as right tackle, he never logged snaps at left tackle. While positions would have to be shuffled around, either bringing Moton back to LT or making Ford grow into the role, Ford’s strength as a prospect outweighs the concerns of determining who should play left tackle.

Backup quarterback is certainly a need, and the selection of Grier is largely considered great value at pick #100. However, holes at starting safety and slot cornerback still exist on the roster. These starting positions should have carried a higher value than an insurance policy for Cam Newton.

Gardner-Johnson was not only one of PFN’s best picks of the 4th round, but he was the number one safety in the entire draft class by many draft touts like The Draft Network. He would also bring ideal versatility to the defense, experienced both as a slot cornerback, where he was the highest graded slot defender in the SEC by Pro Football Focus and true free safety. Simply put, Gardner-Johnson adds the greatest value here as a potential starting safety on day one and years to come, and having to watch him go to the Saints just five picks later made it sting.

Also on the board: CB Julian Love, S Amani Hooker

A productive edge rusher coming off a season with eight sacks for the best defense in the country sounds like the mold for a round one prospect. However, Miller’s draft stock slid to the Panthers at pick #115 due to a myriad of injuries, which hurt his production and consistency throughout his career. Miller is the ideal day three selection as a player with a sky-high ceiling that also fills a need, with Mario Addison becoming a free agent in 2020 and Bruce Irvin only on a one-year deal. If Miller can stay healthy, the Panthers might have struck gold.

The Panthers have a need at linebacker. Gone are Carolina Panthers legend Thomas Davis and depth-piece David Mayo. Although Ron Rivera is transitioning the defense to include hybrid 3-4 looks, the 4-3 defense will remain the base, and the weak side position is still vacant.

Blake Cashman is an ultra-athletic linebacker considered one of the biggest steals in the draft. The Minnesota standout tested in the 91st-percentile at the NFL Combine, featuring 4.50-flat speed. Although a strong backup for Christian McCaffrey is a high priority, Cashman is the best prospect on the board here. He offers tremendous upside as a three-down linebacker and would help the linebacker unit transition from losing franchise legend Thomas Davis.

This pick has become one of my favorite of the Panthers’ entire draft. The Panthers drafted a combination of need and best player available here. Experts such as Daniel Jeremiah found Daley to be one of the most valuable selections in the entire draft at the end of the 6th round.

With the Panthers moving on from Matt Kalil and likely keeping Taylor Moton at right tackle, the depth chart at left tackle is sparse. Daley should be a favorite to make the roster given the thin depth across the offensive line. He could also be another option for the Panthers to evaluate at left guard, which is an open competition this offseason.

While Curtis Samuel and D.J. Moore offer a bright future at wide receiver, there is not much behind them in the receiving room to get excited over. The Carolina Panthers have made a concerted effort to bolster the depth behind Samuel and Moore, bringing in veterans Chris Hogan and Aldrick Robinson, as well as adding seventh-rounder Terry Godwin. Godwin is a solid fit as a deep-threat receiver with upside coming out of the SEC. There was a surprising list of receivers still on the board here such as Emanuel Hall, Jakobi Meyers, and David Sills V. We stick with Godwin here, who has made a huge splash in rookie minicamp.

In this article:Brian Burns, Featured, featured, Greg Little, Will Grier