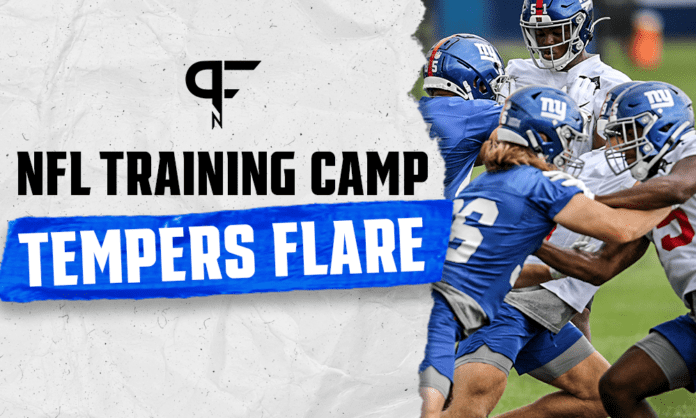 On the first day of NFL teams wearing pads in practice, a brawl broke out in New York, and a Panthers player took a scary headshot.

An utter lack of self-control or basic concern for the wellbeing of one’s teammates marred the first full day of padded practices around the NFL. Members of the Carolina Panthers and New York Giants both went too far on Tuesday [August 3]. And there were real-world consequences.

Panthers wide receiver Keith Kirkwood was carted off on a stretcher and taken to an ambulance after suffering a blow to the head from teammate J.T. Ibe while trying to make a catch across the middle.

Kirkwood had his legs taken out while reaching for a catch, and then Ibe hit him flush high — which has been among the many high-risk hits the NFL has been desperately trying to eliminate.

Fortunately, Kirkwood avoided major injury. Panthers head coach Matt Rhule said shortly after it happened that Kirkwood had movement in his extremities, and the Panthers later announced that Kirkwood suffered a concussion and has since been released from the hospital. All spinal scans were negative and the concussion was minor, PFN has learned.

A brawl breaks out in New York

About an hour later and some 600 miles to the north, a full-team brawl broke out at Giants practice. Somehow, starting quarterback Daniel Jones ended up at the bottom of the pile — which is the exact opposite of where a player in a red non-contact jersey should find himself.

Head coach Joe Judge was so incensed that he had the team run a series of 100-yard sprints and do pushups as punishment. But it doesn’t seem as though the message got through.

Logan Ryan — who helped spark the brawl by blasting Evan Engram from behind in retaliation of Engram’s hit on Jabrill Peppers, who first leveled Corey Clement (confusing, we know) — later told reporters he had no regrets over his instigating role. Ryan said he was defending a teammate.

Granted, it’s easy to say that when your quarterback emerges from the dogpile unscathed. “I was fine,” Jones said after practice.

“I was all good… I’m part of the team, part of the offense. We’re just competing. Everyone’s excited, first day of pads. We’ve got to a better job of controlling that.”

There will be no second chance for Ibe, at least in Carolina. The Panthers cut him, a safety who was making the league minimum, almost immediately. Carolina did finish practice after a 12-minute stoppage.

“It is completely unacceptable to see something like that,” Rhule later told reporters. “There are bang bang plays that happen, guys will hit the ground, but you can’t tee off on someone. It’s not what we do. It’s undisciplined by us. It can’t happen.”

Quarterback Sam Darnold added, “We’re all praying for [Kirkwood] out there. I’m sure we’ll see him. It’s a sad part about our game. I think we’ve got to do a lot better job of taking care of each other out here. I think it was a sad thing to see. It was a hard lesson we learned today. You hate to see that for anyone.”

Ibe, through his agent later released a statement, obtained by The Athletic, saying that he’s checked in with Kirkwood acknowledging that “as a teammate, I’m supposed to protect my brothers during practice and I didn’t do that today.”