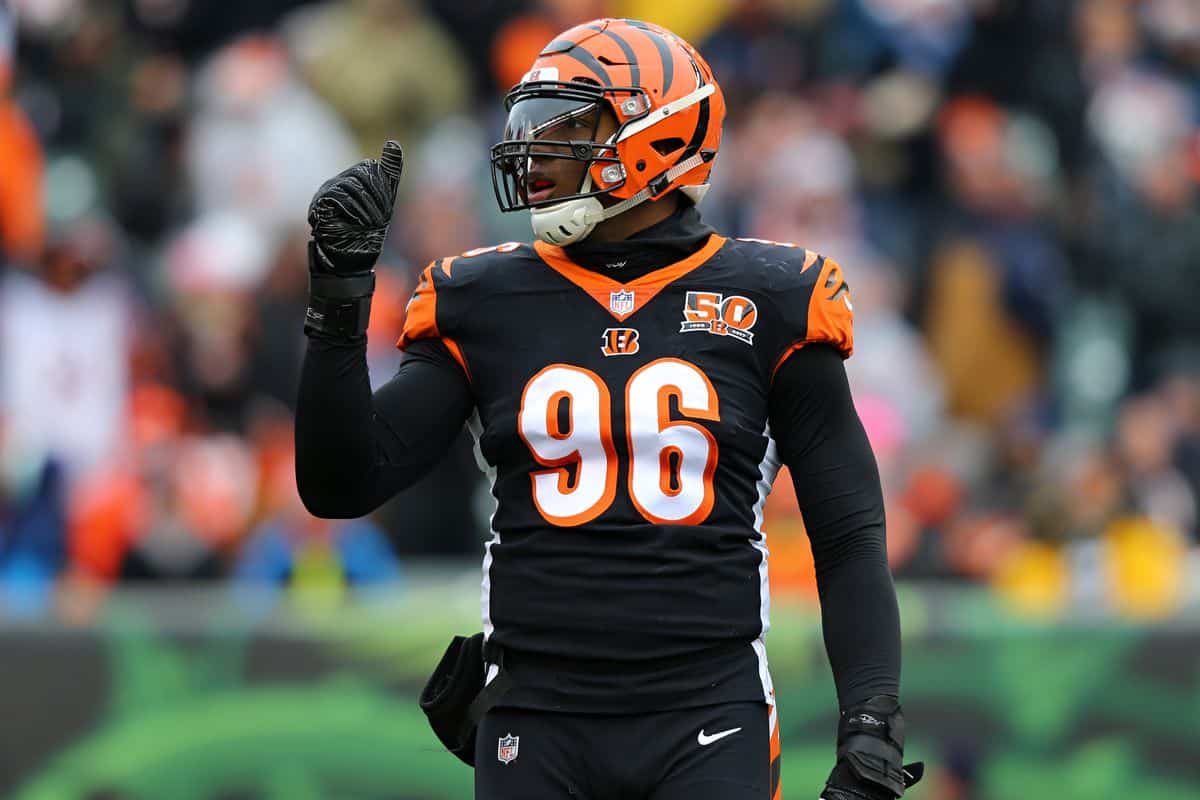 The three most important positions in the NFL are quarterback, offensive tackle, and edge rusher. Despite linebackers and safeties still playing a role, a team’s defense will feel incomplete without a quality edge rusher. Their ability to wreak havoc against the pass while also thriving as a run stopper could propel the defense from a good unit to a great one. Matt Williamson recently released his top 25 edge rushers entering the 2020 season. Some outcomes were a little surprising as Chicago’s Khalil Mack and Arizona’s Chandler Jones finished first and second. The question for Bengals fans is; where did Carlos Dunlap land in these edge rusher rankings?

While Bengals fans might not have much to cheer for this season, their pass rush could be one of their better units. That starts with Carlos Dunlap, the lone Bengals player on Williamson’s list.

There’s always good players who are hidden because of the teams they play for. Even Jones, who finished second, usually isn’t the first pass rusher that comes to mind because he plays for the Cardinals. Dunlap, 31, fits right into that category, given Cincinnati hasn’t finished above .500 since 2015.

As Williamson writes, it’s Dunlap’s ability to win in both elements of the game that makes him one of the more valuable defenders in the NFL, coming in at No.22 on the list.

“Playing in Cincinnati hasn’t been the best way to get the recognition a player such as Dunlap deserves,” Williamson wrote. “But he has been a well above average starting edge defender now for some time. Like everyone listed, Dunlap greatly affects the passing game, but running his direction is a difficult chore for any offense. Dunlap did his best work down the stretch for Cincinnati even though the Bengals were a bottom-feeding team and rarely played with the lead.”

Since entering the league in 2011, Dunlap has been a consistent quality force down in the Jungle. A seven-year starter, he’s only improved with age in both tackling and playing the pass in multiple areas.

Against the run, his numbers are of similar quality. From 2014-2019, Dunlap collected 72 tackles for losses, leading the Bengals in that category four straight years. Adding more tackles as a run defender, he’s finished with a minimum of 43 tackles during his seven-year starter span.

Was 22nd a fair ranking?

Overall, this is a ranking most Bengals fans could get behind. Alongside Geno Atkins, Dunlap has been the face of Cincinnati front seven for a decade, yet hasn’t felt respected by the rest of the NFL. Currently sitting 11th among active sack leaders, Dunlap could inch closer to the triple digits entering his 11th NFL season.

One could argue that Dante Fowler Jr. should be lowered to 22nd entering 2020 behind Dunlap and recently signed Cowboy Everson Griffen. The former No.3 pick was a bust for Jaguars before transforming his career with Wade Phillips and the Rams. It will be interesting to see him in a new defensive scheme and could eventually lead to lesser production on a lucrative deal.

Which other Bengals could work their way onto this list next year?

Who knows, perhaps in a year, rising stars like Carl Lawson and Sam Hubbard will be considered as potential names alongside Dunlap for Williamson’s 2021 edge rusher rankings. The former Auburn product, Lawson, has tallied 14.5 career sacks in three seasons, while Hubbard has become a flawless run defender opposite Dunlap. For now, having one Bengals star on the list is better than none.

Dallas Cowboys: How can the offense exploit the Falcons defense?