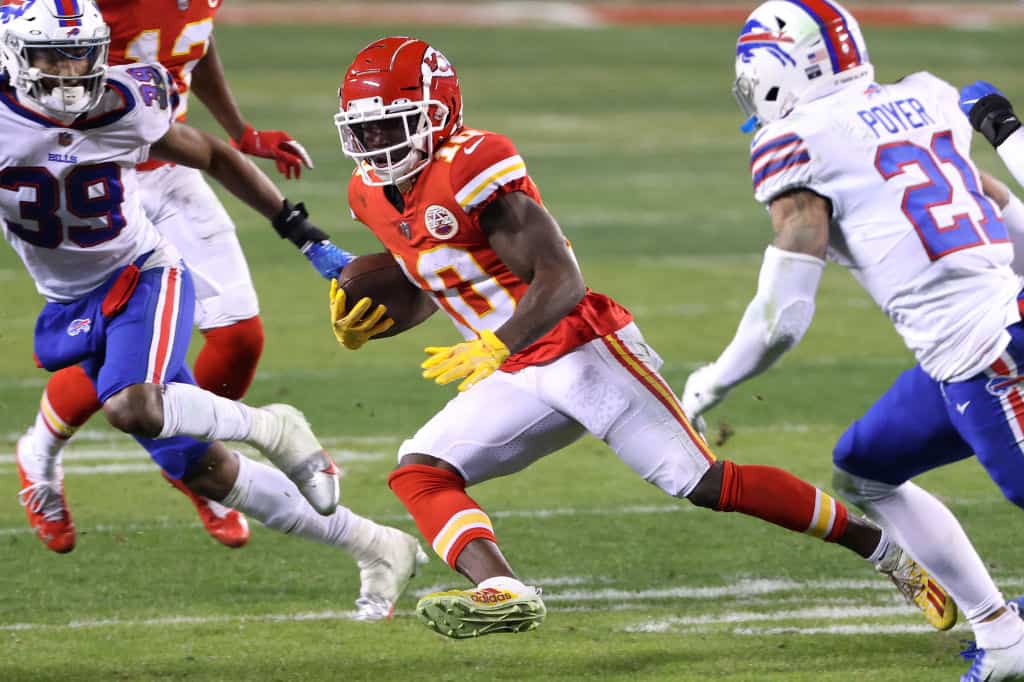 KANSAS CITY, MISSOURI - JANUARY 24: Tyreek Hill #10 of the Kansas City Chiefs runs with the ball in the second half against the Buffalo Bills during the AFC Championship game at Arrowhead Stadium on January 24, 2021 in Kansas City, Missouri. (Photo by Jamie Squire/Getty Images)
What's in this article? Click to show
Tyreek Hill’s playoff performance has been excellent in most measurable ways
Hill is in the midst of one of the best stretches of play of his career
Will Tyreek Hill continue playing at an elite level in the playoffs?
Want more NFL news and analysis?

If the Kansas City Chiefs are going to defeat the Tampa Bay Buccaneers to win their second consecutive Super Bowl on Sunday, they will need Tyreek Hill to be at the top of his game. Fortunately for them, according to the Offensive Value Metric (OVM), the 2020-2021 NFL Playoffs have seen Tyreek Hill play some of the best football of his career.

If you’ve been following the Chiefs’ playoff run so far this season, you don’t need me to tell you how excellent Tyreek Hill’s box score statistics have been. Through two games, he has totaled 17 receptions for 282 yards. However, when I say that Hill has been playing at an elite level, that isn’t what I am referring to.

Instead, I want to discuss the amount of value Hill gives the Kansas City offense through the lens of his OVM grades. The OVM is a measuring system created by the (Bx) Movement to evaluate players based on how much they contributed to their offenses. It allows us to measure a player’s actual offensive impact, rather than just their box score statistics.

In general, Tyreek Hill earns solid but unspectacular OVM grades. That is primarily due to a lack of play-to-play consistency. He’s explosive but not always reliable. This season has actually been worse than usual for him; his regular season grade was the lowest of his five-year career, although not by a significant margin.

In the playoffs, however, Tyreek Hill has flipped the script completely. The chart below shows his overall regular season OVM grade compared with his grades from the Chiefs’ two playoff games this season, alongside several statistics involved in calculating those grades.

As you can see, Hill’s OVM grade in the playoffs is about ten points higher on average than what he earned during the regular season. In fact, Hill’s grade from the AFC Championship Game against the Buffalo Bills was his highest of the year. According to the OVM, he has arguably been the most impactful player on any team during this year’s playoffs.

Looking back at the above chart, it is easy to see why the OVM views Tyreek Hill’s playoff performances as so much more impactful than the ones he produced during the regular season.

The standout difference is his catch percentage, which has seen an increase of nearly 20% in the playoffs. That is an enormous increase in reliability, which would make a huge difference for any player. However, it is doubly impactful for a player with Hill’s explosiveness. Each additional catch gives him another chance to create a big play.

In the AFC Championship Game against the Buffalo Bills, Hill improved significantly in another area as well. He generally does a reasonable job of creating extra yards after the catch, but last weekend he more than doubled his season average, leading all players in that category.

Even more impressively, that number was 6.5 yards higher than it should have been, according to the NFL’s statistical calculations. That combination of consistency with elite post-catch production is what offensive coordinators dream of, and keeps defenses up at night.

Tyreek Hill’s playoff OVM success had foreshadowing. His run of excellent play extends further back into the regular season. Below you can see a graph showing his grades from each week of the 2020 season, represented by the black dots. For comparison, the yellow line represents the average OVM grade for wide receivers during the regular season. 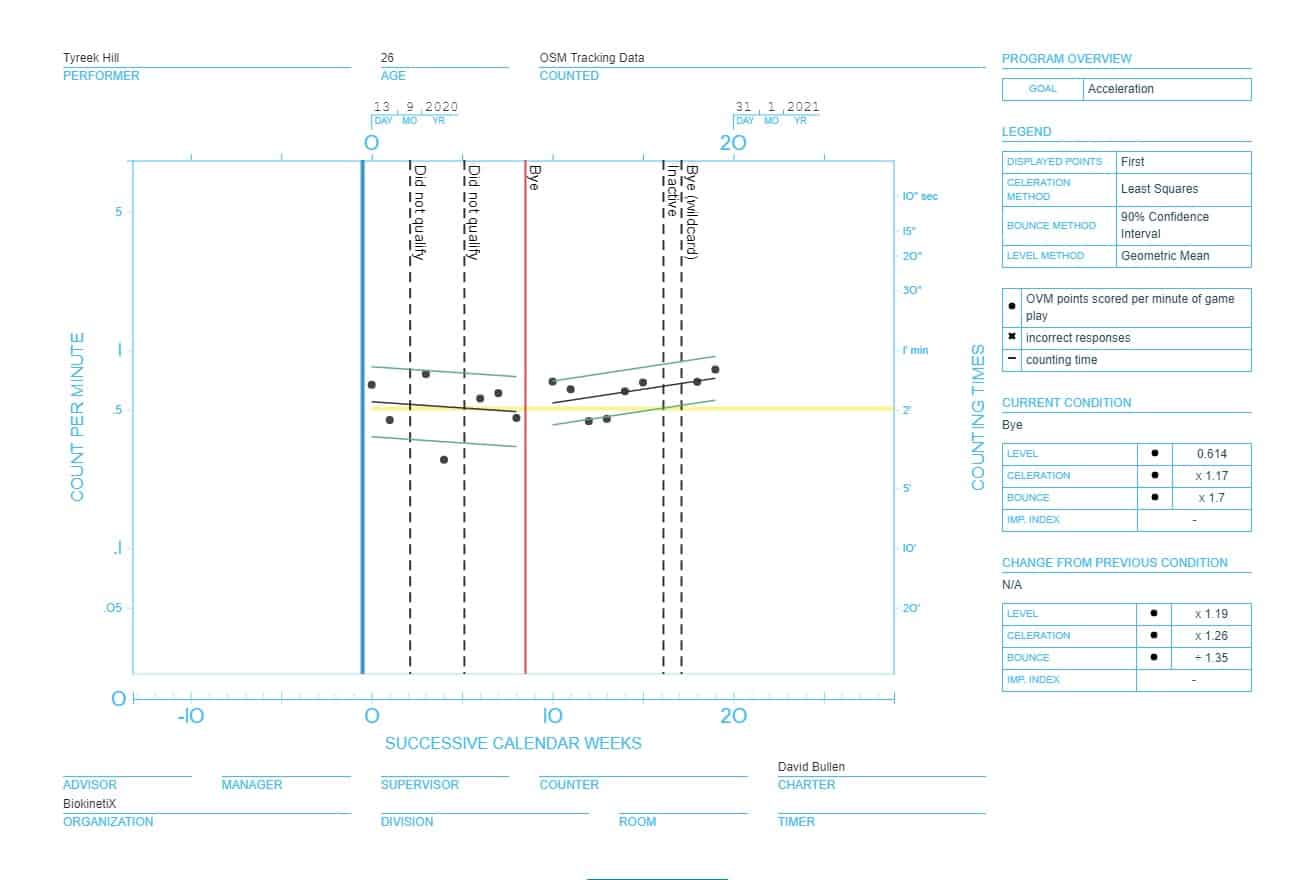 Hill has been well above the league average in each of his last four games. In the last three, he earned an OVM of 40 or higher, something he has done just one other time in his career. That was late in his rookie season. Hill’s return to that level of play, four years later, could not have come at a better time.

Will Tyreek Hill continue playing at an elite level in the playoffs?

The Chiefs and Buccaneers met during Week 12 of the regular season. The final score was close, but Tampa Bay had no answer for Hill, who broke 200 yards in the first quarter and finished the game with 269 yards and 3 touchdowns. The Buccaneers can’t allow a repeat performance if they hope to emerge victorious on Sunday.

Unfortunately for them, Hill is playing even better now than he was at that point in the season. If his level of play carries over into the Super Bowl, there might not be anything Tampa Bay can do to stop him.

And while Hill replicating the absurd level of success he saw in Week 12 seems unlikely, if he gets anywhere close, Kansas City will probably find themselves bringing home their second consecutive Lombardi Trophy.