Leonard Fournette had a bad regular season for the Buccaneers but played better in Super Bowl LV. Can he bring that level of play into 2021?

Leonard Fournette’s first season with the Tampa Bay Buccaneers started off poorly. However, once the playoffs began, Fournette became an entirely different player and ultimately played a crucial role in Tampa Bay’s Super Bowl victory. If the Buccaneers are going to repeat as champions, they will need Fournette to maintain that level of play next season.

Leonard Fournette had an up and down regular season in 2020

Despite being on the Buccaneers’ roster from Week 1, Fournette wasn’t a consistent contributor during the 2020 regular season. He was inactive for three games and earned zero yards in two others. In fact, he rarely gained more than 20 yards.

Across the entire season, he rushed for 367 yards and 6 touchdowns, also adding 233 yards through the air. Those are decent numbers for a backup running back, but they certainly weren’t enough to earn Fournette a major contract.

While Fournette’s regular season was somewhat underwhelming from a box score perspective, his advanced metrics were far worse. To show what I mean, let’s turn to the Offensive Value Metric (OVM). The OVM was created by the (Bx) Movement to evaluate players based on how much they contributed to the creation of their statistics rather than the statistics themselves.

In the case of running backs, the OVM uses numerous advanced statistics to measure how efficient they were while carrying the football. For much of the 2020 season, Fournette was among the worst running backs in the NFL on this metric.

His overall grade for the regular season was just 2.98, tied for fourth-worst among all qualifying running backs with his new teammate, Giovani Bernard. A grade that low indicates that rushing the ball with Fournette was rarely an effective method of advancing the ball. Thus, it’s no surprise that Tampa Bay didn’t rely on him during the regular season.

To explain why Fournette’s regular-season OVM grade was so low, we need to examine the advanced metrics involved in calculating it. And they do not reflect well on him. For starters, opposing defenses didn’t appear to respect Fournette in the regular season. They only put eight or more defenders in the box against him on 10.31% of his snaps. That was the ninth-lowest percentage in the NFL.

And yet, even though Fournette was placed in relatively easy situations to navigate, he failed to take advantage of the space Tampa Bay’s opponents were giving him. The first indicator of this fact is what the NFL calls the efficiency rating. In simple terms, the efficiency rating is the yards of physical distance a player ran for each yard they gained on the field. In essence, it measures how much of a north-south runner a player was.

For a bruising back like Fournette, you would expect this number to be low. In reality, he was one of the least efficient rushers in the NFL last season, with a rating of 4.19. Only seven running backs were less efficient. Unfortunately, all that dancing didn’t help Fournette gain yards. His meager average of 3.8 yards per carry was the ninth-lowest in the NFL. Even worse, the NFL’s projections suggest that Fournette’s average was 0.38 yards lower than it should have been, the 10th-worst differential.

In short, even though Fournette faced less resistance than most other running backs, he was significantly less efficient than most of the other players at his position. Fortunately for him and Tampa Bay, everything changed when the playoffs arrived.

After struggling in the regular season, Fournette turned it on in the playoffs

While Fournette’s regular season with the Buccaneers was underwhelming, the playoffs were a different story. To help visualize his improvement, let’s examine Fournette’s weekly grades from the entire 2020 season. The chart below shows his grades from each week, including the playoffs, marked by the black dots. For comparison, the yellow line represents the league average OVM grade for running backs during last season. 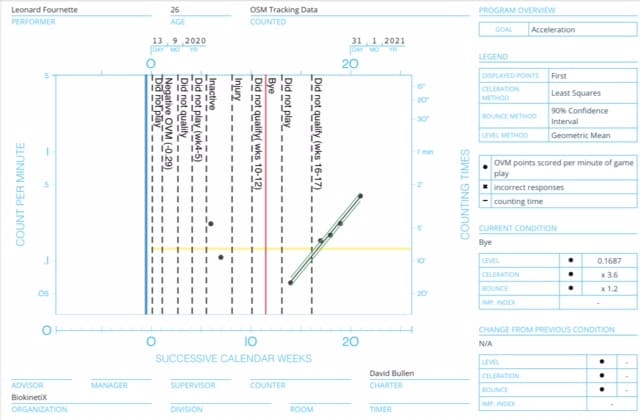 As you can see, there were quite a few weeks in which Fournette either didn’t play at all or didn’t play enough to earn an OVM grade. Of the four grades Fournette did earn, only one was above average. The other three were significantly below that mark, including one in the negatives.

However, when the playoffs arrived — Fournette stepped up his game — improving from week to week, ultimately culminating in an elite Super Bowl performance. He produced a season-high OVM grade in the NFC Conference Championship and then again in the Super Bowl.

Peaking in the Super Bowl

After a playoff run that already represented a significant improvement over his regular-season standards, Fournette had easily his best performance as a Buccaneer in Super Bowl LV. He produced one of his best box scores of the season, totaling 89 rushing yards and 1 touchdown. What really stood out, though, were Fournette’s advanced metrics. He earned a grade of 23.42, more than 10 points higher than his next-best grade and bettering his regular-season average by more than 20 points.

Unsurprisingly, he improved upon his regular-season metrics in every category. For starters, the Kansas City Chiefs’ defense did their best to stop Fournette, putting eight or more defenders around the line of scrimmage on 56.25% of his carries. Despite that, Fournette had an extremely efficient game, with an efficiency rating of 3.09 and 5.56 yards per carry. Unlike the regular season, when he averaged fewer yards than expected, his Super Bowl average was an impressive 2.52 yards higher than what the projections suggested it should have been.

All told, Fournette put together an elite performance on the biggest stage. The Buccaneers might not have won without him.

Leonard Fournette’s continued success could be critical for Tampa Bay

In addition to re-signing Fournette, the Buccaneers retained most of the key pieces from last season’s Super Bowl victory. They should be among the favorites to win it all again in 2021. If Fournette can continue to perform at the level he showed throughout the playoffs — and especially in the Super Bowl — the Tampa Bay offense might be even better in 2021 than they were a season ago.