Can Derek Carr prove he’s a franchise quarterback on Sunday?

Derek Carr and the Las Vegas Raiders have a crucial game on Sunday night. Can the Raiders QB prove he is a franchise quarterback?

By Lucas Ellinas
January 9, 2022
Jump around this article Click to show
Derek Carr’s 2021 statistics are a mixed bag
The OVM grades Carr highly
Derek Carr’s weekly grades tell a complicated story
The advanced metrics behind the OVM grades
Can Carr carry the Las Vegas Raiders to the playoffs?

Las Vegas Raiders quarterback Derek Carr is a controversial figure. Despite holding several of the franchise’s passing records, Carr hasn’t been able to lead the Raiders to significant team success during his previous seven seasons. However, after a tumultuous season, Sunday’s game is the perfect chance for Carr to prove he is the QB the Raiders need.

This season, Carr has been a high-volume passer. He has thrown for 4,618 passing yards, easily a career-high and the fourth-most in the NFL this season. However, Carr’s other numbers aren’t as impressive. The Raiders QB has only thrown 21 touchdowns, tied for 13th in the NFL with rookie Mac Jones and the barely moving corpse of Ben Roethlisberger.

Meanwhile, Carr’s 14 interceptions are tied for fifth-most in the NFL. One of the players he is tied with, Ryan Tannehill, has also struggled to find the end zone this season. Yet, the other two, Joe Burrow and Justin Herbert, have both thrown more than 30 touchdowns.

On the whole, Carr has done an excellent job of gaining yards but hasn’t been so effective at getting the ball into the end zone. With that in mind, it’s no surprise that the Raiders offense is only scoring 21.2 points per game.

In fairness to Carr, the Raiders have had an extremely chaotic season. Under such circumstances, it can be difficult to accurately assess a player’s performance only using their box scores. As such, let’s turn to the Offensive Value Metric (OVM).

The OVM is a grading system created by the (Bx) Movement to measure how much of a player’s statistical production they were actually responsible for.

With one game left to go in the regular season, Carr’s OVM grade sits at 23.84. That ranks 11th out of 39 qualifying quarterbacks, about where you might typically place him — a quarterback who is on the verge of being elite without quite reaching the same heights as the NFL’s best players at his position.

Still, it’s better than you might expect, given how much the Raiders have gone through this season.

Of course, while having a strong overall performance worth celebrating, consistency is important as well. Therefore, we must examine how Carr has performed on a weekly basis.

You can see his weekly grades in the chart below, marked by the black dots. For comparison, the yellow line represents the average OVM grade for quarterbacks this season. 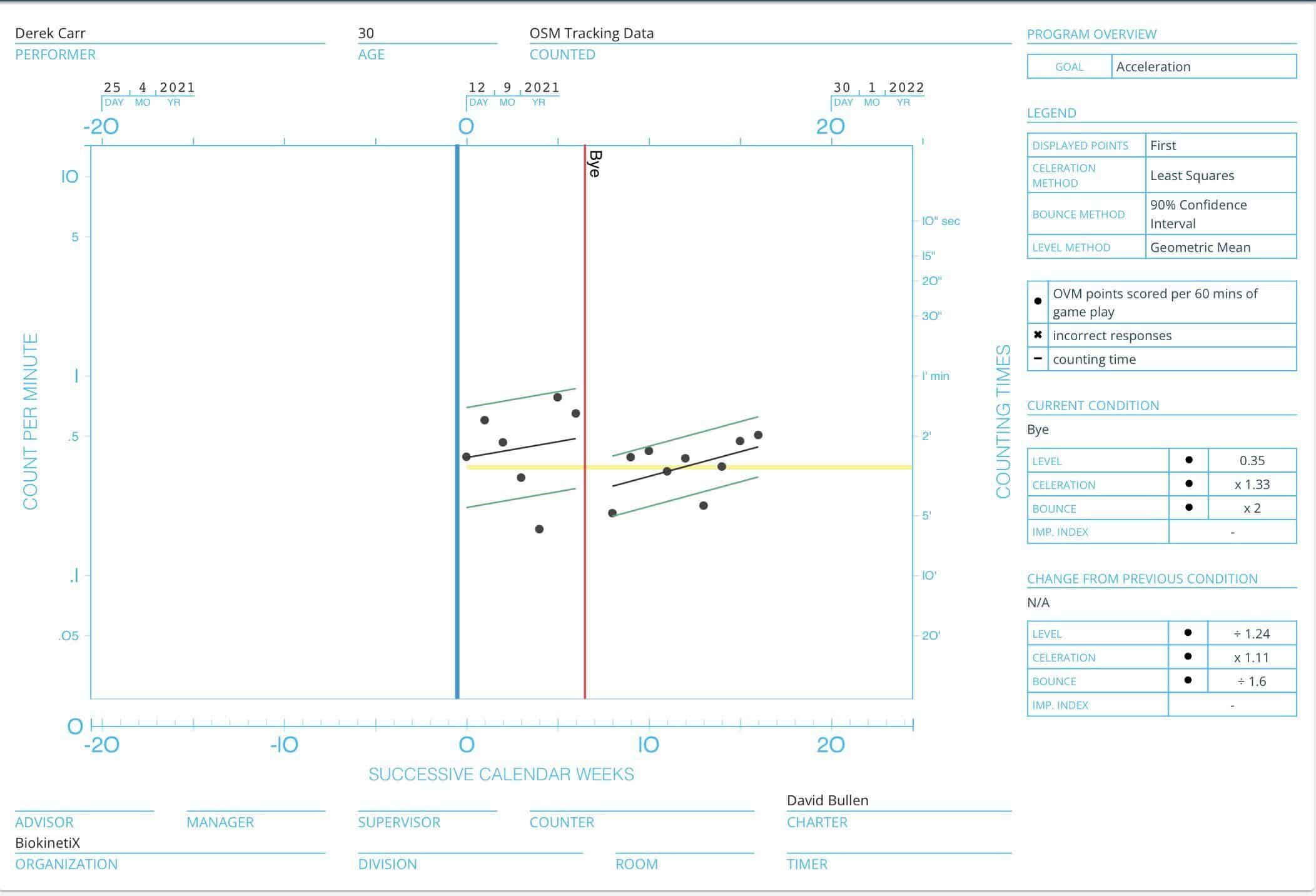 Carr’s worst grades this season have coincided with the two most significant controversies the team has dealt with. Perhaps unsurprisingly, the Raiders QB had his worst grade the day before Jon Gruden re-signed, as the team was inundated by the controversy surrounding the former head coach’s emails. In a 20-9 loss to the hapless Bears, Carr earned a grade of just 10.19. With Gruden gone, Carr and the Raiders rebounded with a pair of wins and Carr’s best grades of the season  (46.72 in Week 6 and 38.75 in Week 7).

But the bye week that followed saw the departure of star wide receiver Henry Ruggs, and Carr earned his second-worst grade of the year the week after. Since then, he has shown steady improvement, aside from a grade of 13.38 in Week 14. Unfortunately, Las Vegas as a team didn’t fully recover until a few weeks ago, which is why they now need to win their final game if they want to make the playoffs.

The advanced metrics behind the OVM grades

To more accurately assess Derek Carr’s grades, let’s look at the advanced metrics involved in calculating them. As a starting point, Carr isn’t throwing the ball particularly far downfield. His passes are traveling an average of 8.1 yards beyond the line of scrimmage across all of his attempts this season and 5.6 yards on his completions. Both of those averages rank around the middle of the pack for quarterbacks.

Carr hasn’t thrown into tight coverage particularly often either. 13.2% of his passes have been thrown into contested windows, the 10th-lowest percentage in the league. However, Carr is performing exceptionally well in one area: his completion statistics.

He is completing 69.2% of his pass attempts, ranking second among all qualifying quarterbacks. According to the NFL’s projections, that number is 2.5% higher than expected, the fourth-best differential in the league.

As such, while the passes he has attempted this season haven’t been particularly challenging, the Raiders QB is completing them at a significantly higher rate than expected.

Can Carr carry the Las Vegas Raiders to the playoffs?

Carr and the Raiders have been the victims of circumstances outside of their control this season. The scandal and subsequent resignation of Jon Gruden, followed by the arrest of Henry Ruggs, threw a once-promising season into turmoil.

And yet, despite how much has gone wrong, Las Vegas has won three straight, and winning one more will send the Raiders to the playoffs for the first time since 2016 and give Carr his first chance to play in the postseason.

The Sunday night rematch against the Chargers, who beat Las Vegas by two touchdowns when the teams met in Week 4, will be a crucial test. Furthermore, it might determine Carr’s future with the team.

If Carr plays at his best and leads Las Vegas into the playoffs, he will have done so in spite of tremendous controversy surrounding his team. That’s exactly what you need from a franchise quarterback.