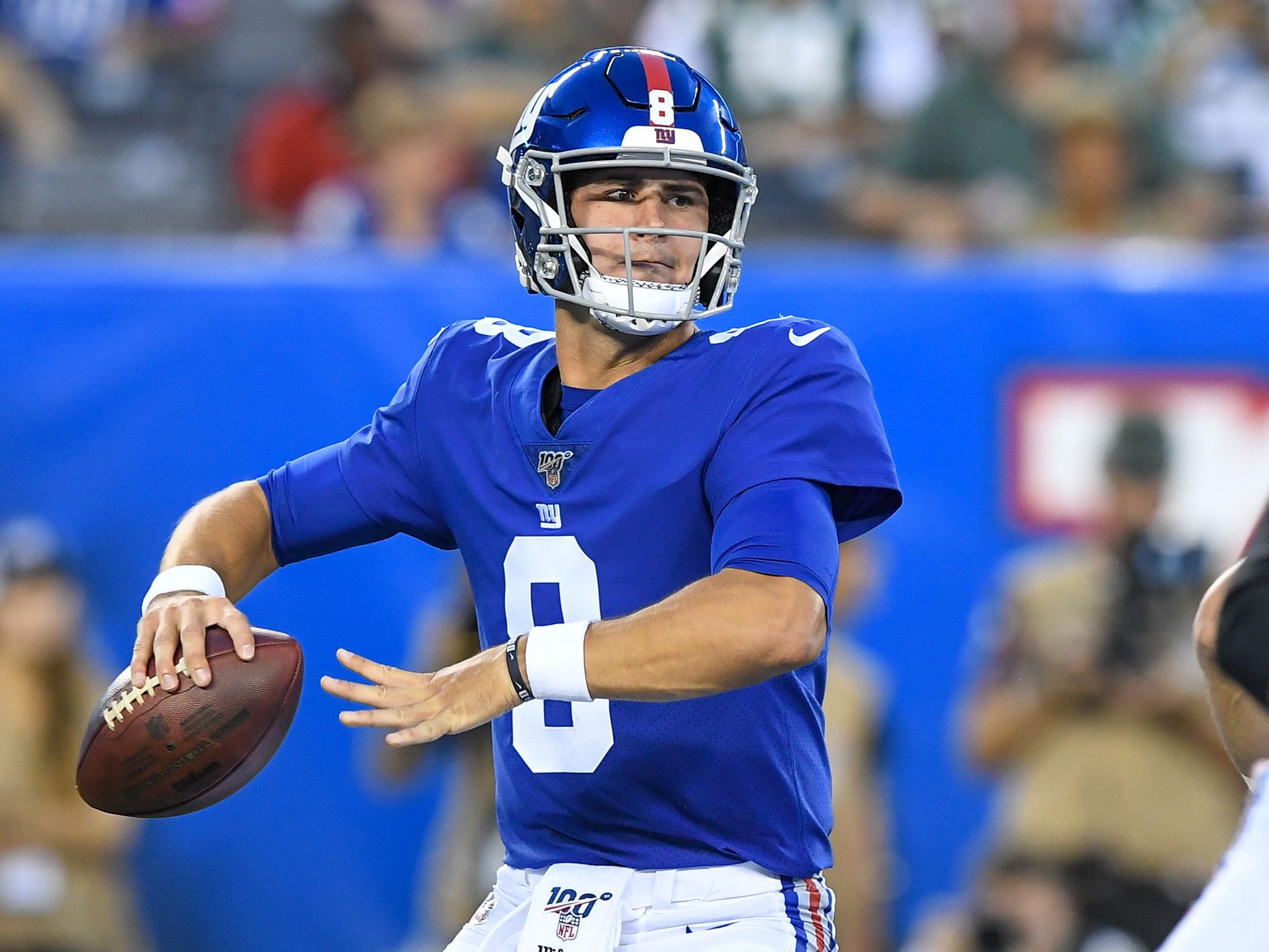 What's in this article? Click to show
Jones gives his endorsement
New York Giants’ rookie quarterback progression
How does Jones compare to other first-round QBs?

Last week, we witnessed an impressive battle between two rookie quarterbacks selected in the 2019 NFL Draft. New York Giants quarterback Daniel Jones went up against Washington Redskins rookie Dwayne Haskins. Haskins, unfortunately, went out with an injury early but looked good in the first half of the game. Jones, on the other hand, put up huge numbers with an OSM score of 27.61, 352 yards and five touchdowns. Even after this win, there were a number of questions regarding head coach Pat Shurmur and his future with the team. The Giants are still only 4-11, and will once again miss the postseason.

Earlier this week in our Black Monday Tracker, Pro Football Network Insiders Tony Pauline and Benjamin Allbright reported on what they were hearing within league circles regarding the status of Shurmur and Gettleman.

“A lot of people in the league are telling Pauline that they think the New York Giants have no choice but to move on from Pat Shurmur and they expect him to be released at the end of the season. However, it’s going to come down to what ownership thinks of Daniel Jones’ development and how that may play out in 2020 and beyond.”

Allbright also reported that as of earlier this week (December 22), no final determination had been made. However, general manager Dave Gettleman and head coach Shurmur are on extremely shaky ground.

With that being said, has Jones’ development been enough for the team to keep Shurmur?

After their thrilling victory against the Redskins, Jones was asked about Shurmur. The rookie was honest and threw his support behind the Giant’s second-year head coach.

“I think he’s a great coach,” Jones said Friday, via Kim Jones of NFL.com. “I think, particularly for a young quarterback, an opportunity to work with him, as he’s kind of installed his offense, and how he sees it, and how he’s coached me, has been very important to my development, as well as Coach (Mike) Shula. I’m very grateful to have the opportunity to work with him.”

As much as Jones is behind Shurmur, 2019 will mark the Giants’ sixth losing season in seven years. Under Shurmur, the team has gone 9-22. Obviously, all the blame cannot be put on one person as a lot of the personnel decisions and changes have come from Gettelman as well.

Gettleman has displayed an erratic style since taking over the team two years ago. He has made many changes, the most notable being when he traded away fan-favorite Odell Beckham Jr. But, the results have remained the same.

Going into this Sunday, much will depend on how Jones and his teammates perform. If they can upset the Philidelphia Eagles, they will end the season 5-11 and on a three-game winning streak. That could go a long way in proving that the team is on the right trajectory behind Jones and Shurmur and ultimately, could help save their jobs.

The best way to analyze whether or not Jones has really progressed would be with his Offensive Metric Score. OSM is formulated by looking at a combination of mostly the NFL’s Next Gen stats and some others. Doing this allows us to see how well a quarterback or receiver did with what only he could control. This metric accounts for things like air yards, completion probabilities, and differential, aggressiveness, and more.

On the year, Jones has an overall OSM score of 22.01, which falls just into the “good” category. It is enough for him to be QB20 on the year. His best performances came in Week 03, when defenses didn’t know how to scheme for him, and in Week 16 against the Redskins.

Is this enough for Jones to be considered successful in his first year under center? It is difficult to say, but one of the best comparisons we could use would be Arizona Cardinals rookie Kyler Murray,

Both Jones and Murray are in their first year in the NFL. Where Jones has finished as QB20, Murray (the first overall pick in the draft) has had an inconsistent season and is currently QB36. They both play in different styles of offenses, with Arizona playing more of an uptempo air raid offense, but are similar with their arm strength and ability to use their legs. However, OSM doesn’t incorporate rushing data into a quarterback’s score, therefore, Murray’s impact in a game is slightly skewed considering how much he uses his legs.

Murray’s best score came in Week 5, playing against the Cincinnati Bengals. He made some big plays in that game and was a significant reason why the Cardinals came away with the win. This is reflected in his high OSM score, 36.09 for QB05 on the week. Besides Week 05, Murray has only been able to fall into the “good” range of OSM six times out of 16 games. Jones, on the other hand, has been at least “good” 7 out of his 11 games played.

Another interesting aspect of OSM shows us that Murray has actually been detrimental to his team three times this season. Any grade from 0-9 is defined as poor, and detrimental to the team’s offensive production. Murray has had three games with a score between 0-9. Jones hasn’t had any.

With Murray getting quite a bit of Offensive Rookie of the Year hype, it leaves you wondering why Jones is not more prevalent in the discussion? Using OSM, we can see that Jones has actually shown more progress and has been more integral to his team than Murray. If we are ready to crown Murray OROY, is it safe to assume Jones’ progress is at least enough to save Shurmur’s job?

How does Jones compare to other first-round QBs?

Jones has now had 11 career starts with the Giants. Jones has thrown 23 touchdown passes in that time. According to ESPN, only three quarterbacks selected in the first round of the past four NFL drafts have tossed more: Kansas City’s Patrick Mahomes, Houston’s Deshaun Watson, and Cleveland’s Baker Mayfield. It’s better than Philadelphia’s Carson Wentz, New York Jets’ Sam Darnold and even Baltimore’s Lamar Jackson.

That is an impressive feat considering the company he is now in. However, Jones also has 21 turnovers in his first 11 starts. This is the most among quarterbacks drafted since 2016. He has lost an NFL leading 10 fumbles.

Shurmur is clearly enamored with the young QB and has nothing but positive things to say about Jones.

“He has a very, very bright future. I think that’s something we’ll talk about when the season is over. There are certainly things and areas that he needs to improve. But he displayed an ability to stand in there tough, make good throws. He got us in the end zone.”

Whether Jones’ endorsement is enough to save Shurmur is unknown. But, if ownership is to base the decision solely on Jones’ progress, it would be hard to see them moving on from Shurmur. Jones could benefit from another year in this same offense, but the Giants will have to do plenty of convincing over the weekend for Shurmur to retain his job.