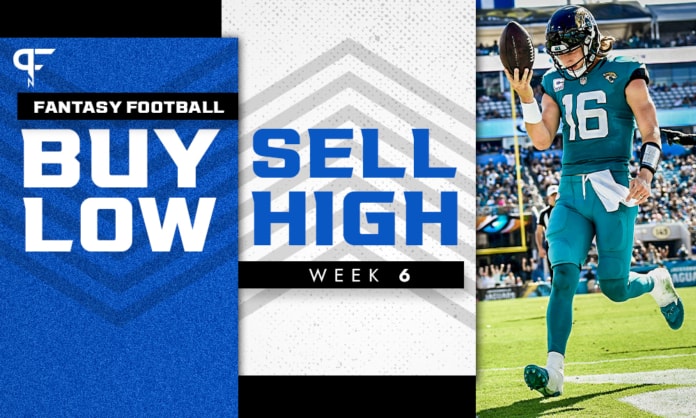 Fantasy football players' stock can change quickly. Here's our look at who to buy low and sell high in Week 6.

Managing a fantasy football team is a process. We’re never finished until the championship is ours. With that in mind, here’s a look at several players you can either buy low or sell high in Week 6.

Who are some Week 6 fantasy football buy-low trade targets?

Take a chance on these players and acquire them while you still can.

This is setting up to be a tale of two seasons. The first phase started with the promise of a franchise QB, a potentially foundational RB, and an underrated receiving corps. With DJ Chark on injured reserve and Trevor Lawrence gradually acclimating to the NFL, we’re about to reach the second phase. The Jags easily could go winless this year, and they’re sure to play from behind most of the time, regardless. Lawrence is in a situation — and has enough weapons — to be a top-14 QB the rest of the way. In two-QB leagues, you can get him for much less.

Micro picture: Javonte Williams and Melvin Gordon are splitting touches. Macro picture: Williams is the Denver RB to roster for the long haul. You can get him on the cheap, and there’s a decent chance Gordon will take a backseat as the season progresses.

The Dolphins didn’t select Jaylen Waddle sixth overall in the 2021 NFL Draft to average a 5-46 line. Even with Will Fuller and DeVante Parker sidelined, Waddle received only the third-most targets among Miami’s pass catchers on Sunday. The season is nearly over for the 1-4 Dolphins, though wins against the Jaguars and Falcons the next two weeks could bring them back from the brink. With Tua Tagovailoa expected to return next week, this is the time to take a chance on Waddle, who shouldn’t cost you much more than high-end bench fodder.

Which potential trade targets should you sell high on?

Look to sell these players before their fantasy football value decreases.

If you read my column yesterday morning warning managers to bench the high-flying Jamaal Williams, you knew this follow-up was coming. Heading into Week 4, Detroit had two RB1s. This was a fluke, not a sign of things to come. You can still get value for Williams as (technically) a co-starting running back. But he remains deceptively TD-dependent on a team that won’t be able to score consistently all year.

Points don’t guarantee future success. Damien Williams’ terrific Week 5 outing masked two looming issues — a touch split with Khalil Herbert and David Montgomery’s eventual return. Sell Williams to an RB-needy manager desperate for a win, and you’ll get the payday you deserve. Wait a week or two, and his value could plummet with one middling performance.

This is an odd pick for me because I hyped Marquez Callaway this summer as an underrated receiver at his WR59 ADP. And he might still have one or two great games in him. But with the Saints headed for their bye week and Michael Thomas potentially returning by Week 8, Callaway is a less necessary stash in deeper leagues. If you can parlay yesterday’s outburst into a swap for a longer-term solution, go for it.