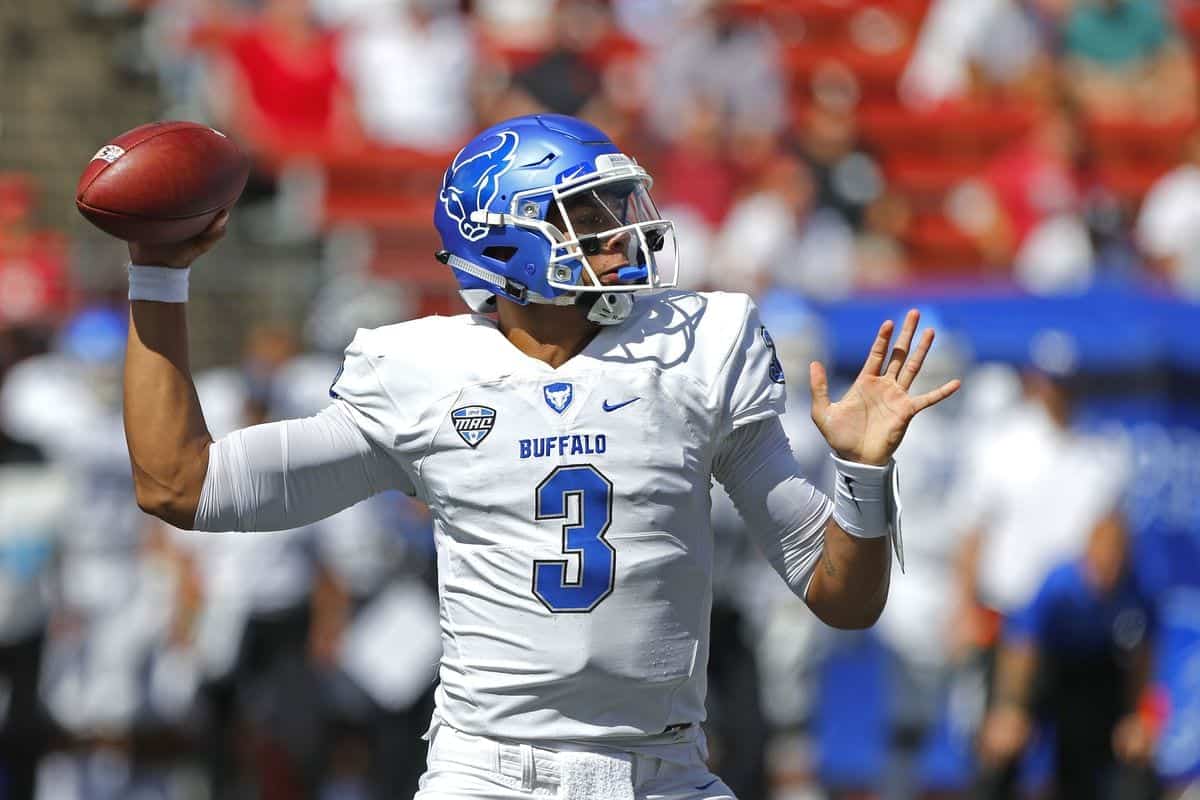 Photo Credit: USA Today
What's in this article? Click to show
Tyree Jackson went undrafted, but he has the opportunity he needs this summer with the Buffalo Bills.
Successful draft season
The fit for Jackson in Buffalo

Tyree Jackson went undrafted, but he has the opportunity he needs this summer with the Buffalo Bills.

Seven rounds. Former University of Buffalo quarterback Tyree Jackson sat through all seven rounds of the 2019 NFL Draft and never heard his name called. 254 players went, and Jackson was forced to think “what went wrong.”

It wasn’t a secret that Jackson had high hopes for draft day. After all, any student-athlete that leaves school early expects to hear their name called.

Prior to his declaration for the draft, scouts were raving about the raw potential of the 6-7, 249-pound QB from Buffalo. Not only is Jackson a heck of an athlete for his size (ran a 4.59 40 yard dash at the NFL Combine) but he’s been regarded as having one of – if not the – strongest arm in college football. What he lacked was accuracy. However, maybe a different location, surrounded by a better coaching staff and more talent around him, could bring out the best in him.

The thought process in most minds was that he’s not ready for the NFL. He could use another year of tape at the collegiate level, whether that be at Buffalo or another school. Jackson floated the idea of transferring, even putting his name into the transfer portal, but as he stated on Bleacher Report’s Stick to Football podcast, his mind was always set on declaring.

Draft season for Jackson went well. At least, that’s what he and others thought. It started with being named the South MVP at the Reese’s Senior Bowl and spilled over into a solid workout at the combine. He reportedly then met with several teams including the Buffalo Bills, New York Giants, Carolina Panthers, and others.

Somehow, no matter how raw people may think he is, Jackson slipped through the cracks, and general manager Brandon Beane took the opportunity to keep him close to school. A familiar site, somewhere where he’s comfortable. A place and environment where fans already love him.

The spot in Buffalo is perfect. As stated above, Jackson isn’t leaving for a new city. When recruited as a three-star recruit in 2015, he took over for a school that didn’t have a history of winning. Through his progression as a dual-threat QB, he led the Bulls to a 10-2 record this past season. While Khalil Mack may have put Buffalo on the map some six years ago, Jackson gave students and the city a football team to cheer for in 2018.

The fit for Jackson in Buffalo

Fit when it comes to culture is vital especially for a rookie. But at the end of the day what matters in the NFL is the production on the field.

Just one year ago, Beane drafted quarterback Josh Allen as the franchise QB. A raw talent coming from a small school in Wyoming, head coach Sean McDermott knew he was getting a signal caller that could sling the ball. The athleticism was there, too. But arm talent is hard to pass up.

No doubt, Beane and the rest of the front office saw similarities in Jackson that they saw in Allen last year. A strong-armed, athletic QB that needed a professional coaching staff to uncover just how high the ceiling is. Jackson can do all the things Allen does so he’ll slide in and fit what Buffalo wants to do on offense.

Buffalo might not be a long-term stay but with Derek Anderson’s retirement things look more optimistic. He has competition in Matt Barkley, a veteran QB that filled in admirably for an injured Allen last year. Realistically, third string is probable. If Beane wants Jackson in town long term, McDermott would need to carry three quarterbacks on the active roster. Once Jackson has NFL tape, the practice squad would give teams an opportunity to steal him for their own.

Rookie mini-camp is in the books. According to those there, Jackson looked every bit what teams saw at Buffalo in 2018 and throughout the draft process. Time between now and OTA’s is spent getting acclimated with the playbook and building chemistry with teammates.

In this article:Featured, featured, Tyree Jackson