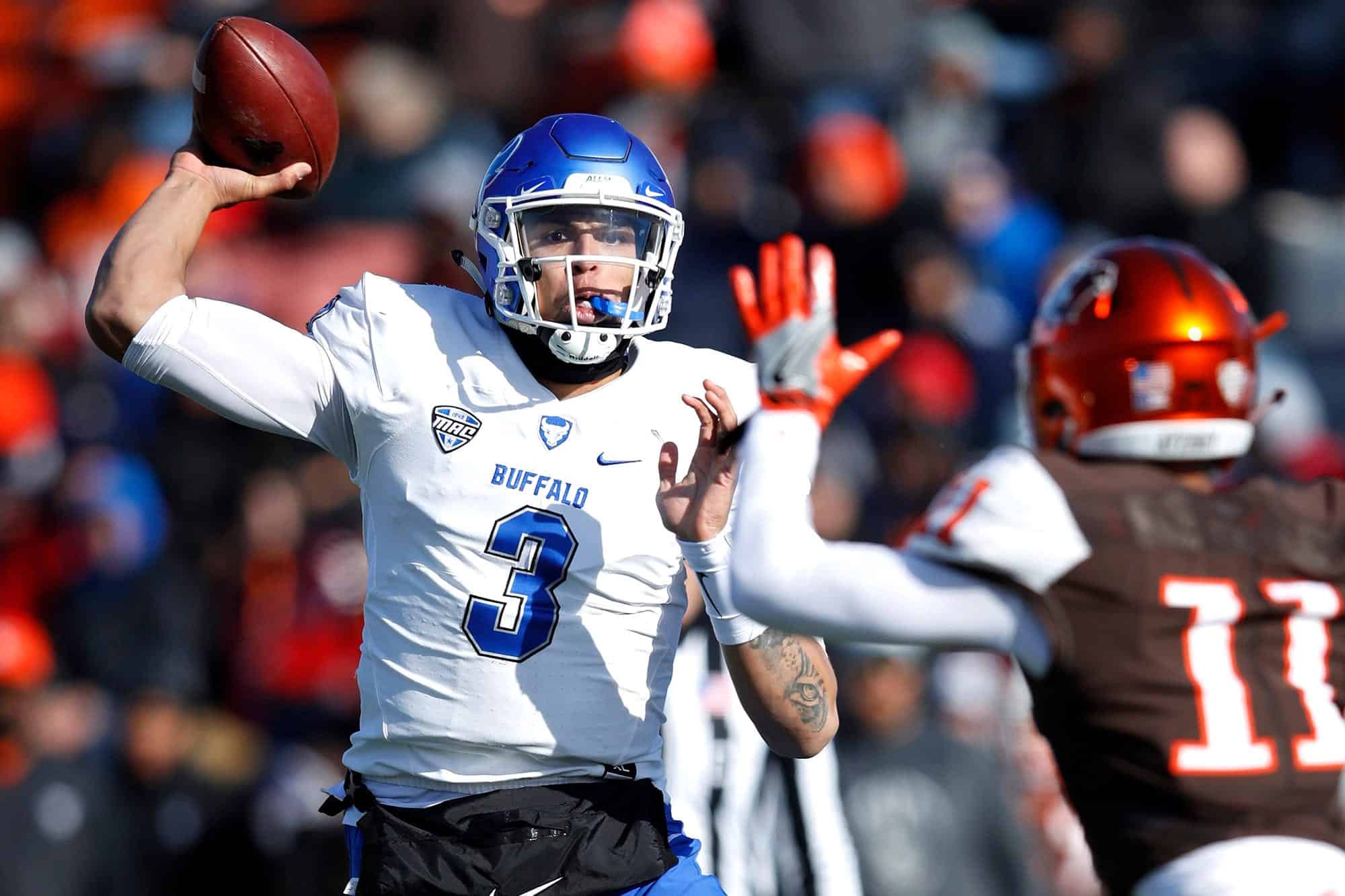 Photo Credit: New York Post
What's in this article? Click to show
There were several big named players that went undrafted during the 2019 NFL Draft. Figuratively and literally speaking, former University at Buffalo quarterback Tyree Jackson might be the biggest of those players. The Buffalo Bills were very fortunate to sign Jackson once the draft was complete.
Strengths
Size Advantage
Weaknesses
Final verdict and projections with Buffalo

There were several big named players that went undrafted during the 2019 NFL Draft. Figuratively and literally speaking, former University at Buffalo quarterback Tyree Jackson might be the biggest of those players. The Buffalo Bills were very fortunate to sign Jackson once the draft was complete.

For the last three years, the Mid-American Conference (MAC) has been dealing with what may be considered a Madden created player. The MAC dealt with 6’7″, 245-pounder quarterback Tyree Jackson from Buffalo. Jackson was once considered a mid-round marvel, but he fell out of the draft board altogether. Once he went undrafted, Jackson decided to stay in town and sign with the Buffalo Bills.

In his junior year at Buffalo, Jackson finished with 3,131 passing yards and 28 touchdown passes. In addition, he had 161 rushing yards and 7 touchdown runs. Jackson was on McShay’s top-10 board for prospects in the 2019 NFL Draft throughout the sixth and seventh rounds. Instead, Jackson went undrafted and later picked up by the Bills.

He never got quarterback help until he became a Buffalo Bull. There he began to bloom into a freak athlete in the MAC. Since reaching college he has shown many strengths that compare to the best in the NFL. On the other hand, some weaknesses hold him back from possibly making damage in the NFL. Now, he becomes a Buffalo Bill where he’ll look to enhance his strengths and build on his weaknesses.

The Bills are going to love Jackson’s awareness and the capability to throw passes that only the best quarterbacks can throw.

In the first clip, Jackson has trips right closed formation where he has a post corner option going on the right side of the field. Jackson eyes the defensive backs and makes the throw to the corner route. The pass may have not looked very pretty, but Jackson lofted the ball over three linebackers and underneath the corner guarding over the top of the route. The pass is placed near the sideline so the corner cannot come down and break up the pass. The receiver lands in bounds near the 10-yard line.

The second clip sees Jackson rolling left after the pocket crashes on the right side and he throws off balanced. Jackson’s receiver had outside leverage so Jackson threw a pass to the sideline that was only catchable for his receiver and it was completed.

Jackson also has an arm we only see in one NFL quarterback, Patrick Mahomes.

He rolls left and while on the run throws the ball nearly 60 yards. Although Jackson may not have proper quarterback technique, he has an outfielder type throw like Mahomes. Jackson has a longer wind up with his arm and takes a small crow hop. His other arm and leg also face his target as he aims and lets it fire. Jackson’s bread and butter that can help him in the NFL is deep ball success.

In this clip, Jackson shows the longer release shown in the white line. Jackson also tends to throw off his back foot that will harm him in the NFL. On the other hand, Jackson’s ability to throw the ball will be helpful for the Bills or any other team he finds himself on. Jackson can change an offense in Buffalo with an air raid similar to the Kansas City Chiefs’ offense. He has the ability to not only throw the ball far, but he is accurate enough to place the ball so the receivers can catch it in stride.

Jackson doesn’t only show hints of Mahomes, but his size shows the NFL glimpses of Cam Newton.

Jackson’s size gives him long strides and some breakaway speed. He also possesses the strength to break through a tackle.

After breaking through the initial line of defense, Jackson lowers his head to run through the defender. Jackson turns it into a big gain and really showcases his speed.

In his final run clip, Jackson’s size allows him to break the first few attempts for a sack. He later breaks free and notices there is one more defender. Jackson eyes him and the block in front of him. He can see that his offensive lineman has the leverage from the outside to make the block. Jackson, in turn, bumps outside and turns a potential sack into about an 8-yard gain.

His ability to move on the run is similar to his new Bills’ teammate, Josh Allen. Allen was drafted by Buffalo in the first round of the 2018 NFL Draft. Like with Allen, you can see that some fundamentals are there for Jackson, but there is much that he has to improve on too.

First of all, Jackson can get nervous and force passes. At Buffalo, most of his interceptions occurred when he did not know what to do with the ball. He would end up firing it down the field or forcing it trying to make a big play.

This is a huge red flag that holds Jackson back. Jackson has the opportunity to roll out and run for a few yards. He could also throw the ball out of bounds, but instead, he throws it into triple coverage.

Initially, he had 1-on-2 and 1-on-1, but his pass led the 1-on-1 matchup to come over and contend for the ball. As a result, his pass turned into a small chance with three defenders against one receiver. The lack of intelligence here must be worked on or else he will struggle tremendously. He may need to spend a year or two on the Bills’ practice squad to work on that.

Another problem Jackson has is inaccuracy. That now means that the Bills have two quarterbacks with this issue. Jackson has never learned how to incorporate his legs and body with his throw so he only uses arm strength to throw the ball. His arm throws make it hard for him to adapt and aim smaller passes, particularly, passes that need to thread a needle. He is also very inconsistent with his passes.

The first throw is an unnecessary bullet that goes over his receiver’s head. Jackson’s long windup causes him to not know when to release the ball on time and how much power he should put on each pass. The second clip shows his struggle to aim the ball because his wind up comes over the top and he rifles the ball from five yards away. The over the top windup is not a bad form, but Jackson needs to learn how to adapt those kinds of passes with proper form.

Lastly, he has shown inexperience and poor technique.

In a couple of other clips, we notice that Jackson fires multiple passes off his back foot. In this clip, Jackson leans back and puts all his weight on the back foot which causes him to affect how much power he needs to put on the pass. He believes he needs to put more power on the pass since he is falling back but instead he overthrows his receiver.

This is an often occurrence that must be fixed if Jackson wants to take over the NFL, but as of right now, it shows he’ll be battling to finally learn the true techniques of being a quarterback.

Final verdict and projections with Buffalo

As of right now, Jackson has so much to work on in such little time. However, if he fixes his problems we may see a Madden created player with Mahomes’ arm and Newton’s size and skills. Whether that is with the Bills or another team down the road will remain to be seen.

As previously mentioned, Jackson would probably benefit most by spending a year on the Bills’ practice squad. Then again, he could impress right out of training camp and heavily compete for the backup job behind Josh Allen. Jackson has a ton of potential at the next level provided he can improve on his fundamentals.

In this article:Featured, featured, Tyree Jackson