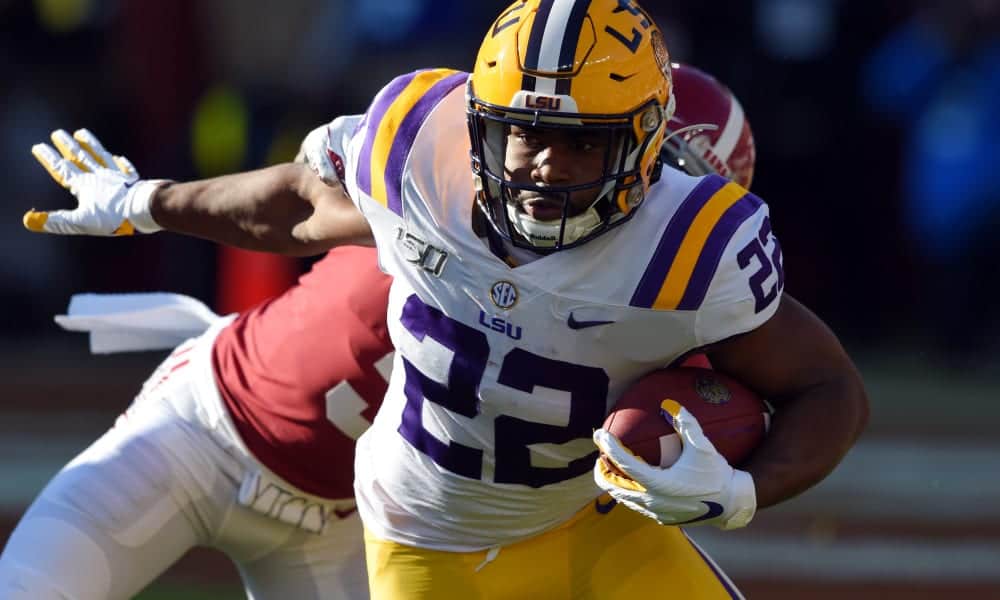 The NFL offseason is genuinely unpredictable. From in house signings to free agency and trades, a team’s needs come draft time can change radically from week to week. However, with a few days left until the 2020 NFL Draft, many organizations are preparing the final gameplan for the big night. After making some significant changes on the offensive side of the ball, the Tampa Bay Buccaneers should target the running back position at some point in the 2020 Draft.

When it comes to the overall performance of the previous group, it was actually above average despite what the black and white stats would make people think. Second-year RB Ronald Jones II out of USC was the lead back for Tampa, carrying the ball 172 times for 724 yards and six touchdowns. He was followed by Peyton Barber, who had 154 carries for 470 yards.

A look at PFN’s Offensive Share Metric is surprising as well as both Tampa RBs were ranked just outside the top ten for their overall 2019 performance. Barber was the 11th ranked back with an OSM score of 17.51 and Jones one spot below with a 17.4. Barber was a top ten RB in 2019 for overall efficiency with a 4.16 rating according to the NFL’s Next Gen Stats. Both backs also excelled last season while rushing against eight or more defenders in the box.

So if the running backs were so good, why is the idea of the Buccaneers taking a RB even being thrown out there? Tampa lost Barber in free agency after he signed with the Washington Redskins. The Buccaneers also addressed one of their most prominent question marks at the beginning of the offseason by signing former New England Patriots quarterback Tom Brady in free agency.

After managing to retain a good amount of their defensive talent, the Buccaneers can use the draft to fill some needs on the offensive side of the football. Tampa Bay has the 14th pick in the first round, and the consensus has them taking one of the many skilled offensive tackles in the 2020 Draft. When conducting some research using PFN’s Mock Draft Simulator, the OT the Buccaneers select is highly dependent on how many QBs are taken ahead of them.

When Joe Burrow, Tua Tagovailoa, and Justin Herbert are selected before the 14th pick, I’ve been presented with a choice of Andrew Thomas from Georgia, Iowa’s Tristan Wirfs, and Jedrick Wills Jr. from Alabama. Three solid choices, all of whom can make an immediate impact for Tampa’s offense when it comes to protecting Brady and opening up lanes for the rushing attack.

However, if Herbert falls past 14 and only two QBs are selected, the ability to chose is eliminated as only one of those guys is making it to the 14th pick in my mock draft experience. This sets up the Buccaneers to target a RB in the second round of the 2020 Draft.

Tampa has an electric pair of wide receivers in Mike Evans and Chris Godwin, with both wideouts hauling in over 1,000 receiving yards each in 2019. Behind them was Breshad Perriman, who signed with the New York Jets this offseason. While there is a need at wide receiver, having that duo to anchor the group is a more significant advantage than just having Jones in the backfield.

Keeping this in mind, there are two backs that Tampa Bay should highly consider grabbing when the 45th pick comes along. The first is J.K. Dobbins from Ohio State.

Dobbins was a three-year starter for the Buckeyes and was tied for the Big Ten lead for rushing yards in 2019 with 2,003. He is skilled in all areas of the position, waits for blocks to develop, and effectively finds holes all over the field. He runs strong with outstanding field vision and instincts, sells pass routes exceptionally well, and is a tremendous blocker who gives effort and finds results.

FLEX ON 'EM!@OhioStateFB's J.K. Dobbins would not be denied on this TD run 💪 pic.twitter.com/5dAPVCpffJ

He shows a sixth sense of what’s happening on the field and can quickly accelerate and reach top speed after cutting back against the grain. Dobbins gives Brady and the Buccaneers’ offense a threat on the ground as well as catching passes out of the backfield. According to Tony Pauline’s big board in the MDS, Dobbins is ranked as the 42nd overall player, a slight fall, but it is not out of the question.

The second back Tampa Bay could target here is Clyde Edwards-Helaire from LSU. Burrow put on quite the show during the 2019 college football season at QB, and Edwards-Helaire’s performance has gone under the radar as a result. He carried the ball 215 times for LSU last season and ran for 1,414 yards and 16 touchdowns while also tacking on 55 receptions for 453 yards.

Edwards-Helaire is a stout hard-charging running back. He’s instinctive, patient, waits for blocks to develop following them everywhere on the field, and shows excellent football knowledge. He is tough to bring down, grinds it out on the inside and breaks tackles, and runs with authority. Edwards-Helaire works to get as much yardage from each attempt carrying the pile and falling forward when tackled.

On top of his attributes that make him a quality ball carrier, Edwards-Helaire is also an outstanding receiver. His reception total skyrocketed from 11 receptions in 2018 to 55 in 2019. He can make adjustments to errant throws and plucks the ball away from his body to make receptions in stride. Plus, did I mention that nasty spin move that could break your ankles just watching it. He should have an immediate impact at the next level as a rotational back and can ultimately develop into the featured rusher.

While Tampa Bay could take a receiver in the second, it makes more sense for the Buccaneers to target one of the top tier running backs at this point in the 2020 draft instead of picking from the leftovers after the receiver feeding frenzy that is expected in the first round. The 2020 receiver class is also extremely deep in terms of talent. Taking a running back early does not necessarily kill the Buccaneers’ chances of selecting a quality wide receiver as plenty of talent should be left when Tampa’s third pick, 76th overall, comes around.