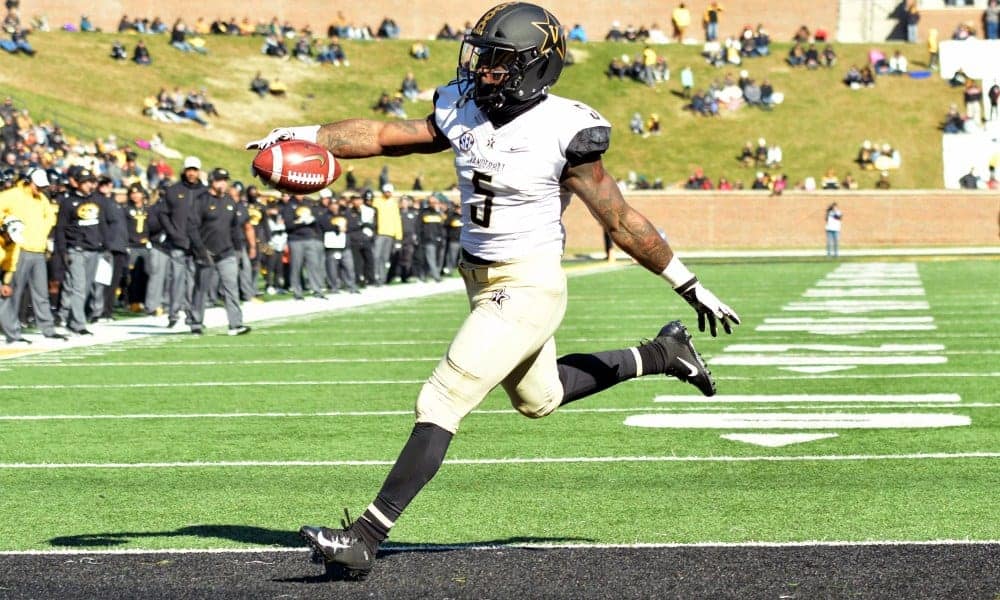 There have been some significant roster makeovers this offseason for a handful of teams in the NFL, one of which is the Tampa Bay Buccaneers. After letting former 2015 first overall pick Jameis Winston walk and acquiring Tom Brady in free agency, Tampa addressed other concerns with the offense, including the selection of Ke’Shawn Vaughn in the third round of the 2020 Draft.

Tampa Bay’s rushing attack saw the back seat last season. Mostly because the Buccaneers were usually in catch up mode. Tampa had the most giveaways of any team at 41, with 30 coming from Winston interceptions alone. The Buccaneers had the fourth most passing attempts during the 2019 season, with Winston throwing 626 of their 630 attempts.

Furthermore, one of the two backs who saw the majority of touches last season, Peyton Barber, left the Buccaneers in free agency to join the Washington Redskins. Barber’s departure sees a running back who excels in PFN’s Offensive Share Metric and an improving blocker leave the equation for Tampa Bay’s offense.

The other back still in Tampa, Ronald Jones, has been improving during his time with the Buccaneers but is still lacking some skill when it comes to pass protection and catching passes out of the backfield. Enter Vaughn, the 76th overall pick in the draft, who brings those exact traits with him, as evidenced during his collegiate career with Illinois and Vanderbilt.

Vaughn is exactly what Tampa needs

With Brady coming to the team, one thing was clear; the Buccaneers needed to invest resources in better protection for one of the best QBs to ever play the game. Selecting Tristan Wirfs from Iowa was step one. Tampa’s offensive line gave up 47 sacks in 2019. Brady’s quick release and proficiency running screens will help lower that number, but head coach Bruce Arians is known for using long-developing passing plays downfield so the need was still pressing.

When Tampa drafted Vaughn, they gave Brady the receiving back the Buccaneers were lacking. Vaughn, unfortunately, suffered from being on one of the worse offenses in the SEC during his time with Vanderbilt. Even with the odds stacked against him, Vaughn was one of two players in the SEC who rushed for at least 1,000 yards from 2018-2019, the other being D’Andre Swift from Georgia.

Vaughn made 66 receptions for 648 receiving yards during his four-year college career. He did not have a varied route tree in college but that was a product of the systems he played, not so much about his talent. Brady has thrown 364 passes to running backs since 2017, a vital piece of the Patriots’ offense the past three seasons.

Not only does Vaughn fill the need for catching passes out of the backfield, but he is also a better blocker than Jones has shown so far. There were quite a few times this season when Jones was sent to the bench due to missing blitz pickups in pass protection. Let’s be clear in saying that Vaughn will not blow you away in the blocking department, but his abilities do seem to be an upgrade compared to Jones.

As far as a rusher, Vaughn is hard-nosed, intense, and quite the competitive player. Out of 3296 collegiate rushing yards, 2,208 of them were gained after contact. While his 4.51 40-yard dash time leaves a little to be desired, he still reached a top speed of 22 mph. When given some space, Vaughn can turn it upfield and is known for being a big-play guy during his time at Vanderbilt.  Much like Florida State RB Cam Akers, the offensive line for Vanderbilt was below-average, and going up against those defenses in the SEC makes Vaughn’s numbers even more impressive than they were.

His performance in the Texas Bowl in 2018 showed off his big-play ability as he compiled two rushing touchdowns of 68 and 69 yards, finishing the game with 13 carries for 242 yards. Arians was vocal this offseason about adding a dual-threat back to help in the passing game, and with more coaching and refinement, Vaughn could quickly make an impact for the Buccaneers offense.

After Vaughn’s selection, the Buccaneers Director of Player Personnel John Spytek explained, “He’s a good runner and a good receiver out of the backfield. He’s got the ability to detach and run some of the routes that Coach Arians likes to do,” according to Tampa’s senior writer and editor Scott Smith. Vaughn fits in with what Arians is looking for in his offensive system and to have the ability to start your career catching passes from Brady doesn’t hurt either.