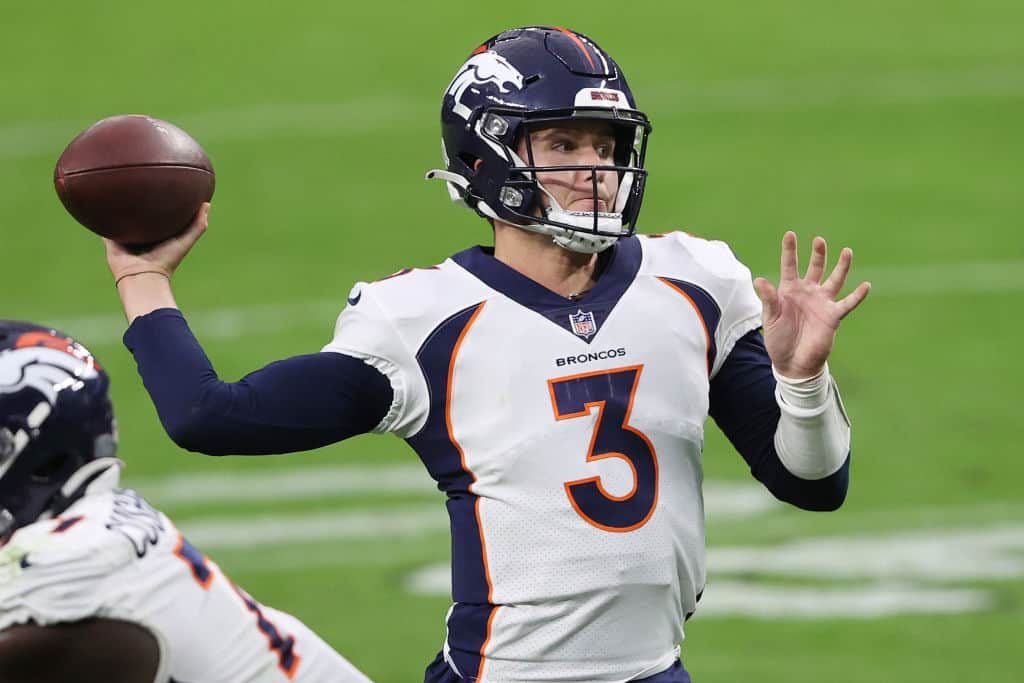 LAS VEGAS, NEVADA - NOVEMBER 15: Drew Lock #3 of the Denver Broncos throws against the Las Vegas Raiders during the first half at Allegiant Stadium on November 15, 2020 in Las Vegas, Nevada. (Photo by Sean M. Haffey/Getty Images)
What's in this article? Click to show
Latest Broncos injury report
An ankle injury has limited Broncos WR Jerry Jeudy in practice this week
Noah Fant battling a rib injury that has him questionable is another potential blow to the Broncos offense
Want more fantasy football analysis and news?

Coming into their Week 11 matchup against the Miami Dolphins, several key pieces have an uncertain status heading into Sunday, giving fantasy football managers a hard time deciding how to approach them. The Broncos offense could be missing their young trio as Drew Lock, Jerry Jeudy, and Noah Fant all carry an injury designation. Will the Broncos offense be out all three? And of the players, who are the likeliest to play come Sunday?

Sunday, November 22: Ian Rapoport reported that despite both of them dealing with rib injuries, Drew Lock and Noah Fant are expected to play in Week 11. The Broncos offense should be at full strength, with Jerry Jeudy carrying no injury designation into the weekend.

Drew Lock’s shoulder injury is trending in the right direction, but Fangio has not decided on who leads the Broncos offense

Lock’s status for that game was not set in stone when the team released its final injury report of the week. Fangio told reporters that Lock would be listed as questionable while dealing with a muscle strain and bruising near his ribs.

Fangio also said that it was possible Lock would be active as the backup to Brett Rypien if he doesn’t start, but that is doubtful.

So that puts us at Friday, and with no official word on Drew Lock’s injury or who will be under center for the Broncos offense, we are left to guess, which would have a massive effect on the fantasy values of the team. Eric Goodman of Mile High Sports Radio reported that a person with knowledge of the situation indicated that the Broncos are planning for Drew Lock to start on Sunday.

2020 is a “prove-it” year for Lock. They have surrounded him with all the talent possible with players like Melvin Gordon, Jerry Jeudy, and Noah Fant. John Elway and the staff removed the excuses if he can not perform. And on the whole, Drew Lock has struggled. He has completed just 55% of his passes (131 of 238) for 2,517 yards and has thrown seven touchdowns along with 10 interceptions. His 12.1 fantasy points per game have Lock ranked as QB33, behind two guys who aren’t even starters in Dwayne Haskins (13.1) and Mitchel Trubisky (12.4).

Yes, injuries have played a massive part in Drew Lock’s season, as there had to be an adjustment time once he came back on the field. I still think he can be a solid quarterback, at least for Week 11. Even if he does play, I will look elsewhere for a streaming option. If Brett Rypien is under center, then the entire Broncos offense gets a downgrade due to his ineptitude moving the ball.

Week 11 marks the second week in a row that Broncos WR Jerry Jeudy has popped up on the injury report. Last week it was a shoulder, and this week it is an ankle injury that had the rookie limited in practice through the early part of the week.

Jeudy was limited in practice on both Wednesday and Thursday due to the ankle injury. However, Jeudy was a full participant in practice on Friday and carried no injury designation into the weekend.

Even last week, while questionable, he came out and led the team receiving yards for a second consecutive week, catching four of eight targets for 68 yards. Even with the shaky quarterback play this season, Jeudy has shown flashes of why he was in consideration to be the first receiver off the board in the 2020 NFL Draft.

The Alabama product has become the team’s top receiver since moving outside, accumulating 32 targets in the last three games, which he’s turned into 15 receptions for 266 yards and one touchdown. The move to the outside is big for Jeudy as it gives the coaches the ability to move him around the field and put him into more advantageous matchups based on the defensive personnel.

However, this is not a great matchup for Jerry Jeudy, especially having been limited with injury for parts of practice, as he is most likely going to match up with Xavien Howard, who allows just .25 fantasy points per route targeted. The Dolphins have allowed only 1.65 PPR points per target on the season, which ranks as the fifth-lowest mark in the league. Therefore, volume has been important. Jeudy will be in the WR3 range in fantasy, but it is a shaky ranking at best, depending on who is throwing him the ball.

TE Noah Fant sat out Wednesday’s Week 11 practice with a rib injury but was able to return to limited work on Thursday, according to Aric DiLalla of the Broncos’ official site. Tim Lynch of Mile High Report reported that Fant was able to be a full participant at practice on Friday but will still carry a questionable designation into the weekend.

Fant previously dealt with an ankle injury that cost him Week 5 and Week 6, but he has played each of the past three weeks, although he has not been his usual explosive self in those games. Since Week 2, he has not surpassed 47 receiving yards and has not found the end zone. Last week, he turned seven targets into just three receptions for 18 yards against the Raiders.

The matchup against the Dolphins is not great either, as they have turned into an excellent defense this year. They’ve allowed just one tight end to finish with more than 9.1 PPR points, which was Hunter Henry last week (though it took a touchdown to do so). Also, no tight end has finished with more than 44 yards against the defense that gives up the eight-fewest fantasy points to opposing tight ends at 10.26. It is worth mentioning that other than their Week 5 matchup against George Kittle, they haven’t faced many quality tight ends outside of Henry last week. Though finding good tight ends is not the easiest thing to do anymore.

If Noah Fant’s injury does keep him out, Nick Vannett is currently the only healthy tight end remaining on the Broncos offense. I have Fant as a low-end TE1 this week, but that says more about the position’s landscape than faith in him this week.