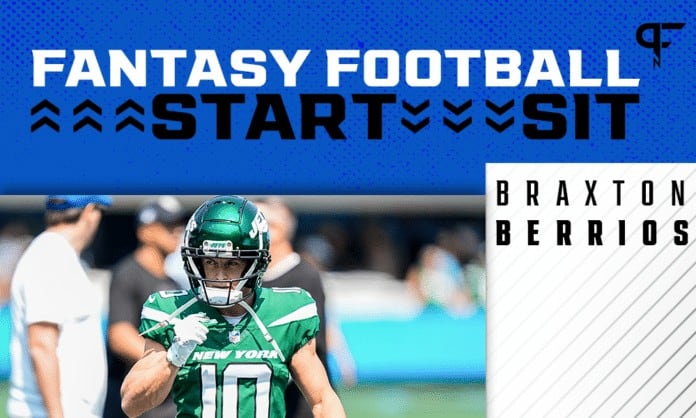 Braxton Berrios Start/Sit Week 2: Can he provide value vs. the Patriots?

Should you start Braxton Berrios in your fantasy lineups or does the return of some other Jets WRs make him a sit candidate in Week 2?

By Ben Rolfe
September 19, 2021
What's in this article? Click to show
Braxton Berrios provided sneaky fantasy value in Week 1
The Jets were undermanned in Week 1
Should you start Berrios in your fantasy lineups this week?

Braxton Berrios was one of the surprise fantasy football performances last week. However, with the New York Jets getting more receiving weapons back, can Berrios be a valuable fantasy commodity again in Week 2, or is he set to disappoint?

With Jamison Crowder on the COVID-19 list and Keelan Cole injured, it was Berrios who stepped up for the Jets. Playing on 57% of the offensive snaps, he had 51 receiving yards and 5 receptions on 7 targets.

Those numbers are an impressive return for a player who had just 43 receptions and 509 receiving yards in 32 games with the Jets. However, it could be hard for the former Miami Hurricanes receiver to make a similar impact in Week 2.

The Jets were undermanned in Week 1

Entering the season, the Jets had a sneakily deep receiver depth chart. Led by Corey Davis, they also have Cole, Crowder, Denzel Mims, and Elijah Moore on the roster. However, in Week 1, Crowder and Cole were absent, while Moore played his first game in the NFL.

The expectation was that Mims would be the player to step up. That was not to be the case. Mims played on just 3 offensive snaps, targeted once. Still, he did pull in a 40-yard reception on that target. This has reignited talk that Mims is on his way out of New York, but after a turbulent offseason, it could simply be the team easing him into 2021.

Instead, it was Moore and Berrios who saw the majority of snaps. Moore played on 86% of the offensive snaps, while Berrios played on 57%. However, while Crowder and Cole are both on the Week 2 injury report, both are expected to be active.

Should you start Berrios in your fantasy lineups this week?

It is tough to trust Berrios this week. The return of Crowder and Cole should cut into the snaps for him and Moore. There is a chance, however, both of them will be limited in Week 2.

Still, last week, Berrios was targeted on just under 20% of his snaps. If those snaps drop by even 10 with the presence of Crowder and Cole, his targets likely reduce to 5 or fewer.

Given that Berrios’ main fantasy value in Week 2 was in PPR formats thanks to his 5 receptions, a drop in targets would significantly hamper his value. It is hard to project Berrios for more than 5 targets this week, which likely caps his upside at around 10 fantasy points unless he scores a touchdown.

While that would be a solid return, the floor is significantly lower if Cole and Crowder significantly eat into his snap count in Week 2.