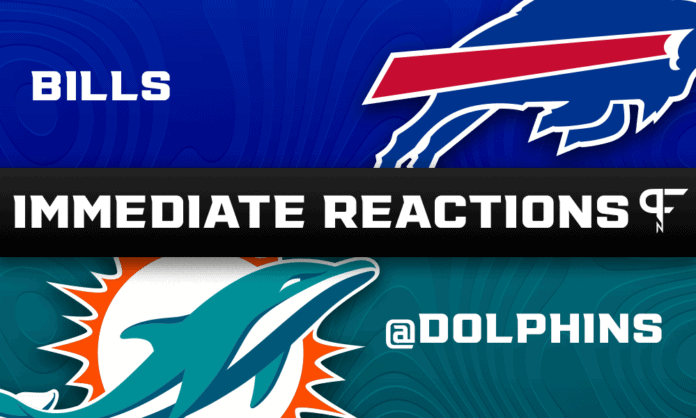 Check out the highlights and scores from the Bills vs. Dolphins matchup as Tua goes down injured and Buffalo dominates from start to finish.

What was the score and highlights from the Bills vs. Dolphins matchup at Hard Rock Stadium in Week 2? Adam Beasley was on the ground.

Observations from the Bills vs. Dolphins game

Simply put, Buffalo dominated this football game from start to finish. And to make matters worse for Miami, Tua Tagovailoa went down with a rib injury.

Here’s how much better the Buffalo Bills are than the Miami Dolphins:

Josh Allen (17 for 33, 179 yards with 2 touchdowns and 1 interception) played a below-average game and yet the Dolphins still never had a chance Sunday.

It’s six straight wins for Buffalo over Miami — including a 35-0 shellacking Sunday — which is a complete reversal from the distant past. The Dolphins went a decade without losing to the Bills during the 1970s. It’s not inconceivable that the Bills flip that script in the 2020s.

And these games have not been particularly close. The Bills have outscored the Dolphins by an average of 20 points per game over that six-game run.

Maybe Tua isn’t the issue for the Dolphins, but rather an issue. Because Jacoby Brissett didn’t exactly light it up when Tua left in the first quarter with a rib injury.

In fairness, the sixth-year vet barely had a chance to throw with the Bills’ defensive front totally owning the Dolphins’ offensive line (more on this later).

And he’s certainly more mobile than Tua and more willing to throw the ball downfield.

But he’s also a bit reckless and certainly not as accurate. Brissett finished the day 24 of 40 for 169 yards and threw a pretty terrible pick in the first half. The Dolphins’ franchise quarterback probably isn’t on their roster right now.

If the Bills get the kind of efficiency running the ball that they did Sunday, this offense has the potential for greatness.

Buffalo relied too much on Allen’s arm last year. More balance was needed to beat the best teams. On Sunday, Devin Singletary provided it on his first carry.

Running through an absurdly big hole created by his offensive line, Singletary went 46 yards untouched to the end zone. He finished with 82 yards on 13 carries.

The Bills put the exclamation point on a dominant day when Zack Moss ran through Miami’s defense for a 7-yard touchdown in the fourth quarter, barreling over defenders on his way to the end zone.

Miami’s offensive line (still) has no cure for its ailments

At this point, we’ve got no solutions to fix the Dolphins’ offensive line. And they probably don’t, either.

Chris Grier has used seven draft picks on the position in the last three years, and yet we still see performances like we had on Sunday.

Jesse Davis is not a tackle, he’s a guard. And yet the Dolphins insist on playing him there. On Sunday, that decision got Tua hurt. Davis didn’t survive the game either, though. He gave way to rookie Liam Eichenberg in the second half after suffering a knee injury.

Still, the issues extend far beyond one player. Austin Jackson at left tackle has been a disappointment bordering on disaster. Robert Hunt, who’s the team’s right guard, committed a pair of penalties Sunday. He’s part of an interior that can’t consistently get push.

Here’s the most damning part of the offensive line’s performance Sunday: 6 sacks. And it wasn’t close to a surprise.

We’d forgive Xavien Howard if he demands a trade — again. He’s being wasted on a Dolphins team that has had next to no offense in his six NFL seasons.

Howard was again the Dolphins’ best playmaker Sunday, picking off Josh Allen on the Bills’ side of the 50 in the first half. But Miami’s offense did nothing with the gift, turning the ball over on downs after Malcolm Brown was stopped short of the sticks on a fourth-and-2 plunge.

Unfortunately, he’s being wasted on a team that can’t score.