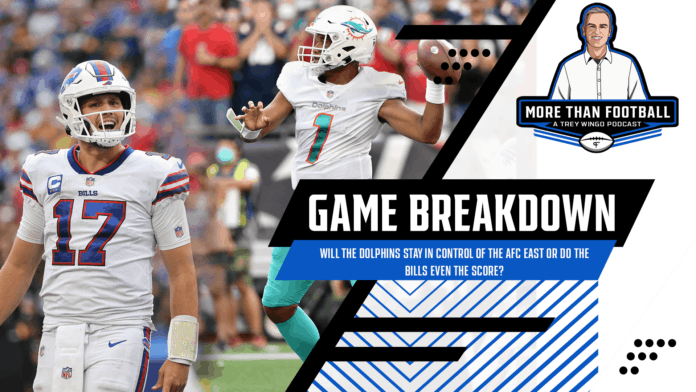 On the More Than Football podcast, PFN's Chief NFL Analyst Trey Wingo previews the matchup between the Buffalo Bills and the Miami Dolphins.

This Sunday features a key divisional matchup between the Miami Dolphins and the Buffalo Bills. On this week’s More Than Football Podcast, PFN’s Chief NFL Analyst Trey Wingo and host Brett Yarris preview Bills at Dolphins.

Bills at Dolphins Preview: Buffalo had a rough opening game

The Bills struggled last week, losing to the Pittsburgh Steelers in a game in which they didn’t really look ready for football. To quote Trey Wingo:

“You’re not going to beat a really good Pittsburgh defense with six holding calls and they get a blocked punt returned for a touchdown.”

Those errors allowed Pittsburgh to win a game in which their offense didn’t play particularly well. Fortunately, Wingo believes Buffalo can shore up their mistakes. This weekend’s game could be the perfect opportunity.

The Bills have won their last five games against Miami, scoring more than 30 points in each of them. Meanwhile, head coach Sean McDermott should have his team ready to avenge last week’s tough loss.

Despite the recent history between the two teams, Wingo does give Dolphins fans a few reasons for hope. To start with, Miami’s defense is a force to be reckoned with. They have forced a turnover in 23 straight games, the longest active streak in the NFL. And against the Bills, they will have a chance to get a few more because Buffalo will likely try to push the ball downfield.

Additionally, Wingo points out that “early-season games in Miami are interesting based on weather.” Teams from the north, like the Bills, often struggle with the heat and humidity of Miami. That’s why the Patriots often struggled there, even when they were winning Super Bowl after Super Bowl.

We’ll see if the weather can help Miami win this crucial early-season contest between divisional opponents.