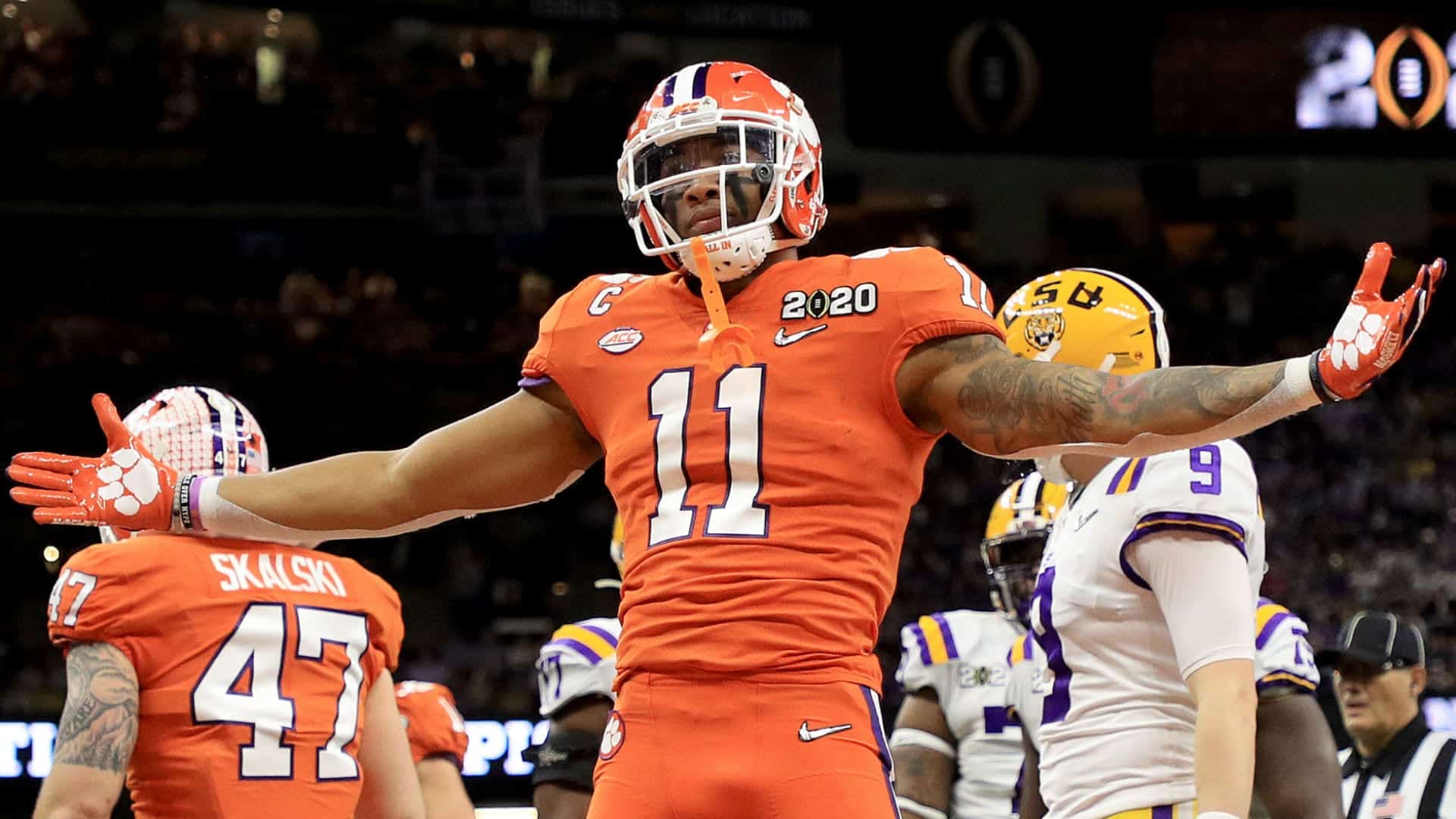 With the NFL Draft and all of its speculation over, attention shifts from when the players were selected to who they were selected by, and how they will fit in with their respective team’s scheme. How does the prospect benefit his team, and how does he fit with his team’s identity? Not every pick is a seamless transition or exact fit, hence why the draft is, by and large, a guessing game. I pondered some of the biggest question marks facing the top prospects and came up with the most pressing questions that each NFC first-round pick must answer in their transition to the NFL level.

Detroit Lions: Can the Lions develop Jeffrey Okudah into one of the best corners in the league?

The Lions took the best cornerback in the draft with the third overall pick. Okudah’s an elite physical talent with superb route-recognition and quickness. His movement in space just looked easy in college, and his tape was one of the easiest evaluations in the 2020 NFL Draft. He was one of the biggest no-brainers among not just every NFC first-round pick, but all first-round picks.

However, expectations are set sky high for Okudah given his early selection. Okudah is the third cornerback ever to be taken in the top-three selections of the NFL Draft. The expectations that he becomes one of the best quickly falls onto him. Can Detroit mold him into that player?

Out of every pick in the draft, the Packers taking Jordan Love was probably the most shocking. The pick doesn’t deserve the amount of hate it has received, because Love has all the talent and ability to be a franchise quarterback for Green Bay in the future. When does he see the field, though? Obviously, Aaron Rodgers is the entrenched starter for this season and likely the next, but what about afterward? Rodgers will be 38 in the 2022 season, and there is a potential out in his contract that year. Will this pick bite the Packers, who are trying to win one more Super Bowl with Aaron Rodgers, or will it be incredible foresight?

I’ve often compared Jefferson to Los Angeles Charger Keenan Allen. From a physical profile standpoint to route-running ability, the similarities between the two are striking. Allen should have won Offensive Rookie of the Year, and his ability since then has not diminished but only grown. If Jefferson wants to have a similar impact, he’ll have to develop his releases against press coverage and show he can consistently win outside, as he spent the 2019 season in the slot, winning against free releases.

Adam Thielen is much of the same way. He excels in the slot and has made his living working off of free releases while letting Stefon Diggs work outside. With Diggs gone, either one of Thielen or Jefferson will have to adjust to playing the outside, an area that isn’t a strength of either one.

In the case of Jeff Gladney, the Vikings got a home-run with this pick. He has the ability to be the team’s CB1 or CB2 opposite of Mike Hughes and can even move inside to play nickel as well. He’s physical, fast, and dynamic, but is over-aggressive and has to work on growing his fundamentals and mental acuity as a corner. There are significant coaching changes in Minnesota, with Kevin Stefanski taking several assistants with him to Cleveland, and with the offseason in turmoil, Gladney’s development may hit a snag. How quickly can he become an impact starter for the Vikings?

Dallas Cowboys: Where is the best spot for CeeDee Lamb to line up in?

The Dallas Cowboys got one of the biggest steals of the 2020 NFL Draft when they selected Oklahoma wide receiver, Ceedee Lamb, with the 17th overall. With talented receivers like Amari Cooper and Michael Gallup on their roster, Lamb joins a crowded room, but one that has plenty of vacant targets. Where does Dallas play him to play to his strengths while also using Gallup and Cooper effectively?

Gallup lined up at the ‘X’ receiver spot often last season while Cooper was the ‘Z’. Randall Cobb was the slot/Y for Dallas last year, but he is gone, leaving that spot vacant. Gallup was great last season at the X while Cooper played at an elite level at Z. Lamb has the makings of a dominant ‘X’ receiver in the NFL. His body control, physicality, hands, and route-running all suggest he could be a dominant player at the X. Yet, Lamb also had the highest yards-per-route-run out of the slot in college football last year and would make mincemeat playing against linebackers, nickels, and safeties in the slot.

A dominant X receiver is incredibly valuable in the NFL. Players like Julio Jones, DeAndre Hopkins, and Mike Evans are all elite X receivers, and all are considered at the top of the NFL’s best receivers list. There’s nothing to suggest Lamb cannot be that type of player on the outside in the future. However, one must consider the growth that Gallup had at X, as well as Lamb’s prowess in the slot. Lamb can change defenses entirely over the middle, which will make defenses lighten up on the outside for Cooper and Gallup.

All in all, this is a good question to have if you are the Cowboys – but it’s one that this NFC first-round pick needs to answer.

New York Giants: Where do they play Andrew Thomas and Nate Solder?

In the week leading up to the draft, word was developing that the Giants were interested in offensive tackles Jedrick Wills and Tristan Wirfs, from Alabama and Iowa, respectively. This made sense in a lot of evaluators’ minds. Wills and Wirfs are both right tackles, and the Giants will just keep Nate Solder at left tackle. The Giants surprised everyone when they took Georgia left tackle Andrew Thomas. This was a great pick, one that I graded highly in their draft guide, but it begs the question of: Where do the two tackles play?

Neither player has had a ton of experience at right tackle, but they both have played the position in the past. Thomas was named a freshman All-American right tackle playing opposite of Isaiah Wynn and then switched over to left tackle after Wynn was drafted. Solder played left tackle in college but started as a rookie for the Patriots at right tackle before he took over the left tackle spot from Matt Light. Both players are present to protect Daniel Jones’ blindside. Solder has more NFL experience, but Thomas is more talented. The battle for these two spots between both guys will be interesting to monitor.

Philadelphia Eagles: How do they develop Jalen Reagor?

The Jalen Reagor pick makes sense for Philadelphia, but it also doesn’t, in the sense that there are plenty of questions for this NFC first-round pick. They needed a fresh player in their receiving room who will be an exciting play-maker. After years of frustrating plays downfield from Nelson Agholor, who struggled with tracking and catching the ball deep despite great speed, the Eagles went out and selected….a player who struggled tracking and catching the ball downfield despite great speed.

Reagor’s quarterback play certainly impacted his own play, but the ball tracking and drops can’t be discounted. Philadelphia hasn’t had a great history of developing these types of players, and they drafted three of them and traded for a fourth in Marquise Goodwin. I agree with the decision the Eagles made to invest in their receiver room, but this pick does carry some risk.

Washington Redskins: Can Chase Young live up to the hype?

The selection of Chase Young at second overall was a no-brainer. There really aren’t any questions about the player himself and his talent. It’s now on the Washington coaching staff to make him that superstar player that they drafted. Head coach Ron Rivera, defensive coordinator Jack Del Rio, and defensive line coach Sam Mills III have decades of experience and have worked with talents like Shawne Merriman, Von Miller, Khalil Mack, and Julius Peppers in the past. Young can be franchise-altering for the Redskins, but he has to live up to the hype.

Continue for the biggest questions regarding the NFC South and West.