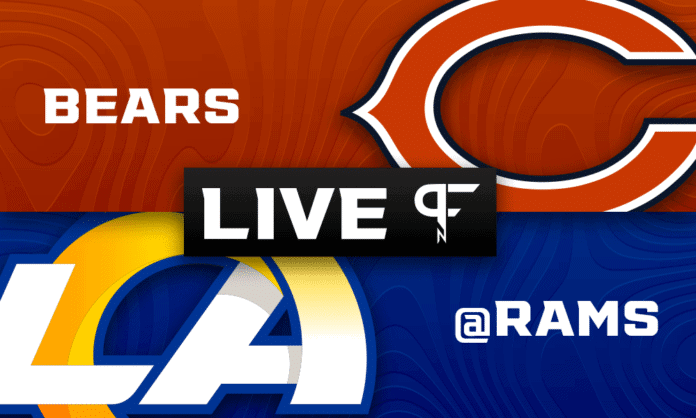 Follow along with the Bears vs. Rams matchup as our live blog keeps you updated on the score and highlights from this SNF clash.

The Bears vs. Rams bout on Sunday Night Football was as competitive as most expected. The Los Angeles Rams opened up at home in their brand new SoFi stadium. They hosted the Chicago Bears, who were rolling with Andy Dalton as their starter. Here are all the Bears vs. Rams highlights, the final score, and some stats from the game.

10:55 PM ET: After some big runs by Henderson, Stafford connects with Robert Woods in the back of the end zone for a TOUCHDOWN to put this game away.

This catch by Robert Woods 😳

10:25 PM ET: Stafford does it again. After another deep pass to Cooper Kupp, RB Darrell Henderson takes it in for a 1-yard TOUCHDOWN. The Rams have had almost half the time of possession than the Bears but are up two scores.

10:15 PM ET: After a long drive that took up nearly 75% (9:38 minutes) of the third quarter, Justin Fields comes into the game for a QB rush. He runs it in for a Bears TOUCHDOWN!

10:05 PM ET: Dalton continues to move the ball. He may not have any highlight-reel plays, but he has been efficient. According to NFL.com, Montgomery has 100+ scrimmage yards and 1+ TD in seven straight games dating back to 2020 (longest streak by a CHI player since 1950). Montgomery currently has 95 rushing yards and 10 receiving.

9:55 PM ET: At the start of the second half, Stafford continues to go deep downfield. Cooper Kupp beat his coverage and was wide open for a 56-yard TOUCHDOWN.

Cooper Kupp was just slightly open on this one 😨

9:30 PM ET: With less than a minute left in the game, Dalton scrambles for a 9-yard rush. He then hands it off to Montgomery, who gets a TOUCHDOWN. The Bears make it a one-score game right before the half.

9:25 PM ET: After a 9-yard sack on Stafford, the Bears get the ball back with decent field position. Chicago gets into the red zone for the first time in the game right before the two-minute warning.

8:56 PM ET: On another fourth down attempt, the Bears’ o-line crumbled, and Dalton fumbled the ball. The Rams take over with great field position. The first play is a dump-off to TE Tyler Higbee, who brings the ball into Bears territory.

8:46 PM ET: The downfield offense of the Rams continues with an 18-yard pass to DeSean Jackson. The Rams drive stalled, and they were forced to attempt a 53-yard field goal. The FIELD GOAL is good, and the Rams are now up 10-0.

8:42 PM ET: The Bears and Dalton continue to struggle. The offense stalled after getting to midfield, and the Bears were faced with a 4th and 5. They decided to go for it, but Jalen Ramsey knocked down dalton’s pass. Turnover on downs.

8:33 PM ET: On his first drive with the Rams and only his second pass with the team, new QB Matthew Stafford takes a deep shot to Van Jefferson for a 67-yard TOUCHDOWN. The Rams were 8-1 when scoring a TD on either of their first two drives in 2020. A good sign for the rest of this game

8:30 PM ET: On a 3rd and 6, Dalton took a shot at the end zone that was tipped and INTERCEPTED by the Rams. According to NFL.com, Dalton has a 6-17 (.261) career record in primetime games, the second-lowest QB win percentage in primetime since 2000.

8:26 PM ET: In what will likely be common with the Bears offense this year, Justin Fields comes into the game to replace Andy Dalton. His first pass is complete.

8:25 PM ET: The Bears start with the ball. Running back David Montgomery gets the first rush of the game and takes it all the way into the red zone with a 41-yard run.

Great start for the #Bears with this 41-yard run from David Montgomery.