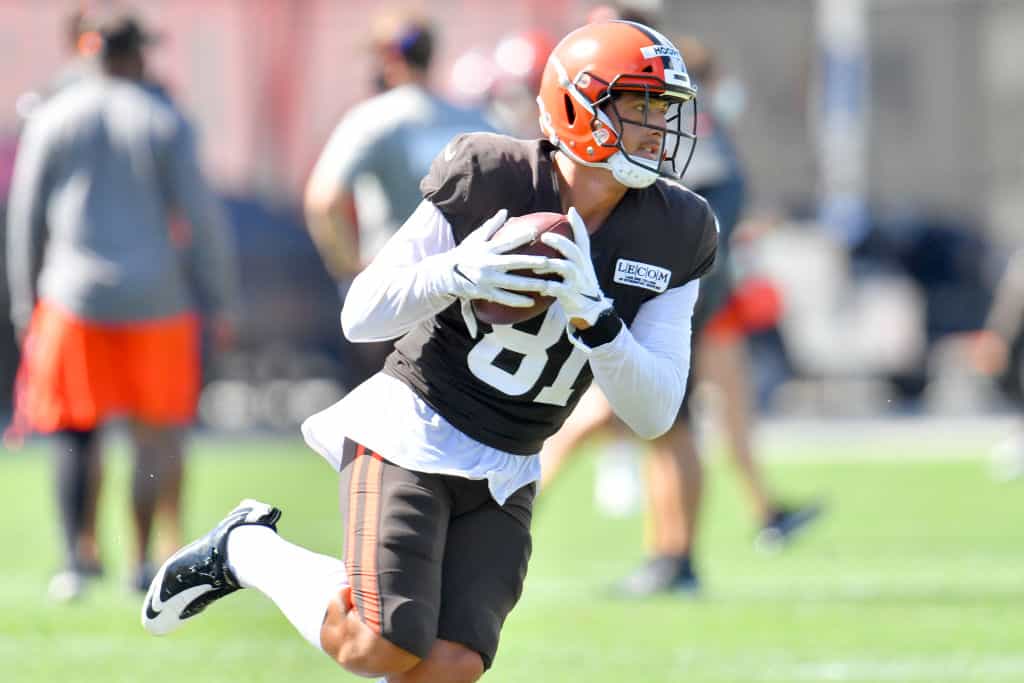 BEREA, OHIO - AUGUST 18: Tight end Austin Hooper #81 of the Cleveland Browns works out during training camp on August 18, 2020 at the Browns training facility in Berea, Ohio. (Photo by Jason Miller/Getty Images)
What's in this article? Click to show
David Njoku’s injury in Week 1
Hooper is already making adjustments to his new team
Austin Hooper’s fantasy outlook for Week 2 and beyond

Week 1 is in the books, and with wild finishes and unpredictability ensuring the NFL is back, it’s time to check on the fantasy implications around the league. Without a true offseason program to get players up to speed, we saw a high amount and high variety of injuries right out of the gate. One of these injuries occurred to Browns TE David Njoku. The team sent him to the injured reserve and Njoku is expected to miss the next three games, making Austin Hooper the main beneficiary of his absence until Njoku returns from IR. What is Austin Hooper’s fantasy value for Week 2 and beyond now that he’ll be the main tight end in Cleveland?

Njoku has had a couple of injuries in the last year that already put him on fantasy managers’ radar. In 2019, during Week 2’s Monday Night Football matchup with the New York Jets, Njoku suffered a broken wrist as well as a concussion that sent him to the IR. Njoku missed 10 games and when he came back he was practically forgotten by most fantasy players who were looking at the playoffs in their leagues.

In Week 1 of the 2020 season, Njoku played on only 17 snaps, catching three passes on three targets for 50 yards and the Browns only touchdown. He finished the week as TE6 in PPR scoring and looked like the Njoku of old. However, it was revealed after the game that he had sprained his MCL and would be going back on the IR, a devastating setback for a young player who just can’t seem to find his stride.

Njoku’s injury isn’t a huge problem for the Browns. The team signed Austin Hooper in the offseason to help share the load at tight end. However, after Week 1, it was looking more like Njoku cemented himself as the starter and Hooper was the backup, something most fantasy managers who drafted Hooper well ahead of Njoku were not too happy about. Now that Njoku’s gone, it’s time for Austin Hooper to realize his fantasy potential, but can he?

Hooper is already making adjustments to his new team

While Njoku’s stat line for Week 1 might seem fairly flimsy for a TE6 finish, that’s often all it takes in this day and age to be a top tight end for fantasy. Predicting touchdowns is one of the flukier things to try to do in all of football, but the players that score more tend to perform better for fantasy, obviously. Now that Njoku is essentially out of the way, Hooper will need to step up.

I previously wrote about Hooper joining the Browns and that it was probably going to take an outside action to get him more looks on the offense. I even said that for Hooper “to get back into the top tier of tight ends, he will likely need Njoku to get traded or have another injury slow him down.”  Obviously, I didn’t want Njoku to get injured, nor did I expect it to happen so soon, but now that it has and the path is cleared, all eyes are on Hooper to perform.

Austin Hooper’s fantasy outlook for Week 2 and beyond

In Week 1, Njoku saw three targets compared to Hooper’s two. Hooper caught both but only for 15 yards, putting him at TE32 in PPR scoring for the week. Clearly those numbers will go up with Njoku sidelined, but anyone that watched that game could see that the problem for Hooper is much bigger than an opportunity. The problem is with Baker Mayfield.

In his recap of the game, PFN’s Sam Penix hit on the crux of the matter perfectly: “David Njoku, Jarvis Landry, and the offensive line (just two sacks allowed against the league’s most blitz-happy defense) get passing grades for the day. Aside from that, there are issues.” Mayfield himself “struggled with reads and indecisiveness” in the Week 1 loss, so Hooper has his work cut out for him if he’s going to become fantasy relevant anytime soon.

Related | Cleveland Browns 2020 Win Total: Is this finally their year?

This week the Browns host the Bengals and number one overall pick Joe Burrow who are coming off of a brutal loss to the Los Angeles Chargers. While the Bengals didn’t exactly shine in Week 1 either, this game will be a rivalry matchup between two in-state division opponents on a short week, so we should expect the unexpected.

Austin Hooper’s fantasy value is still in limbo for now, but if the team rights the ship quickly he could show signs of the Hooper we all remember from last year, which would be a welcome sight. For now, put Hooper on your watch list and see how it plays out before adding him to your team.