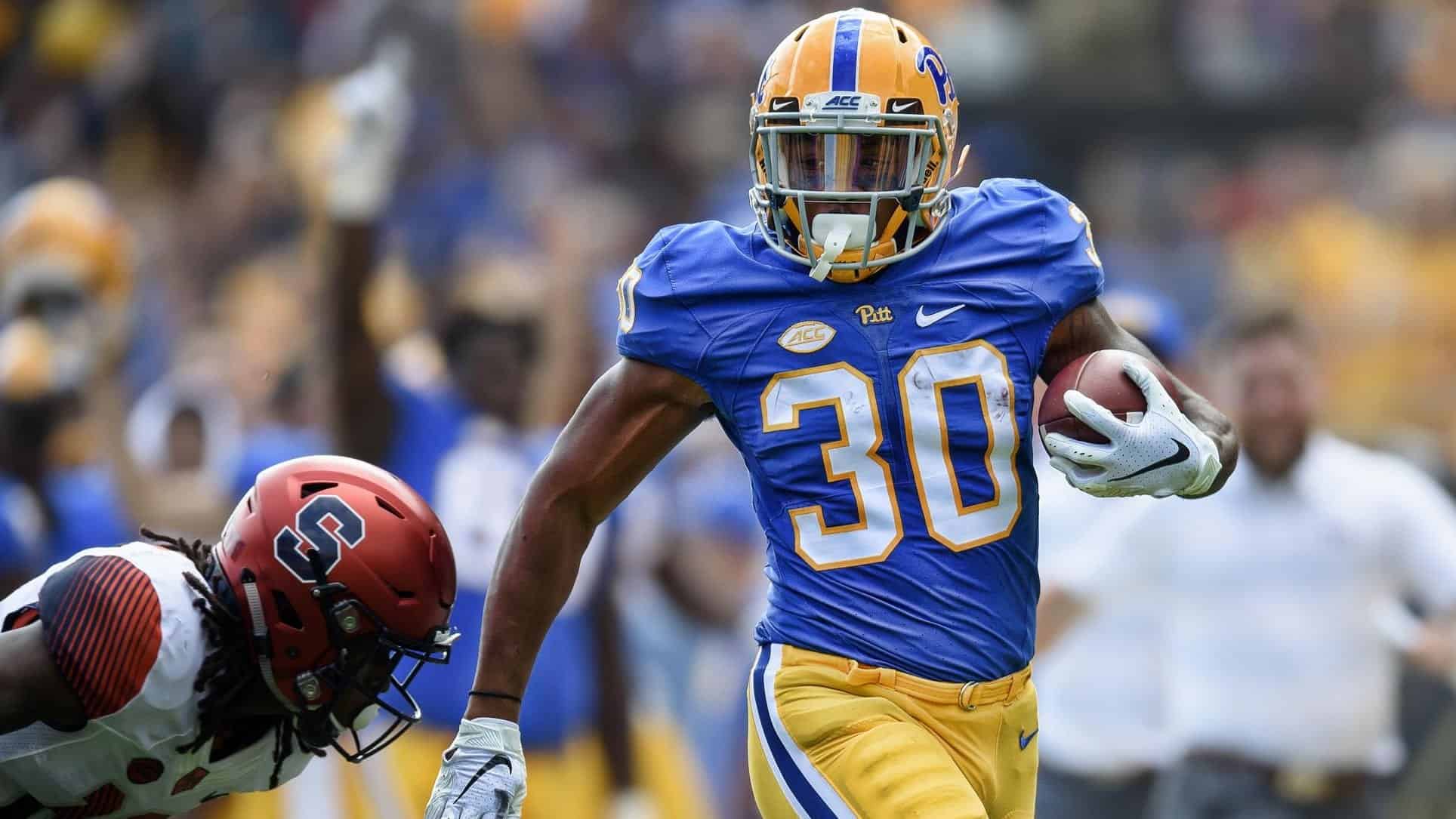 Photo Credit: pittsburghpanthers.com
What's in this article? Click to show
Who is Qadree Ollison?
What about his playing style?
Atlanta Falcons running back room outlook

It has become an annual tradition. With the exception of 2016, the Atlanta Falcons have spent one of their draft picks on a running back in every year since 2014. It dates to the selection of Devonta Freeman in the fourth round of the 2014 NFL Draft.

The overall success of the running backs the Falcons have drafted has varied greatly. But some late round stars have blossomed along the way. Of course, Freeman, who was mentioned earlier is one of them. After that came Tevin Coleman in 2015. Last season, Ito Smith had some success as a rookie this past season.

Who is Qadree Ollison?

Qadree Ollison enjoyed a bumpy four-year career at Pitt. As a freshman- in 2015- he stepped in for James Connor and put up over 1,000 yards rushing. Unfortunately, he didn’t eclipse that mark again until his senior year, this past season.

Ollison never put up big touchdown numbers in his career, his highest being 11. But he was effective with his carries in his college career, finishing his senior year with 6.3 yards per carry.

Standing firm at 6’0” 228 pounds Ollison is a true power back and it shows in his stats. He ran a decent amount of plays out the backfield but wasn’t targeted much, finishing his career with only 375 receiving yards. Most of those, however, came his junior year when he was in a rotational role.

What about his playing style?

Ollison has a very unique profile for a running back. In college, he demonstrated the power to be a between the tackles runner and often looks best when working off his blockers. He runs low, putting his shoulder down through contact to gain yards and break tackles.

Of course, Ollison also comes with a bit of bad to his game, as expected. Unfortunately, he doesn’t seem to have the juice and elusiveness needed to make defenders miss in the open field. He is very heavy footed and will struggle to change directions and get his weight underneath him when doing so. His vision isn’t terrible, but he can get tunnel vision at times and will struggle to create on his own.

Traditionally a player with his sort of play style doesn’t adapt well to the NFL game but that doesn’t stop the Falcons from attempting to breaking the norm. With Freeman being a do it all back and Smith looking to be a good change of pace guy, Ollison has the potential to bring the power up the middle the team has been looking for.

Now that he is with a team it’s easier to figure out what his role will be. While a lot is set to change between now and the regular season, Ollison could look to carve out a role early on. Currently, Freeman and Smith are looked at to be the one-two punch for the team. After that Ollison will look to battle for a backup role with Kenjon Barner and Brian Hill.

New offensive coordinator Dirk Koetter has been with the team before and knows Matt Ryan well. His knowledge of Ryan’s strengths could lend favorably to how he implements the running backs on the Falcons roster.

As stated above Ollison brings something to the table the other two don’t, his power. That power, alongside his pass protection ability, could allow him to see the field early. Given his current size and power, Ollison could be very effective as a blocker. With further cleaning up of his technique, he’ll only improve in that area as well.

While Ollison may never be a star back in the NFL he has enough traits to stick around and be a solid rotational guy for the Atlanta Falcons. With his power, decisiveness, and pass protection Ollison offers the upside to see the field early in his career, no matter the role he’s given.