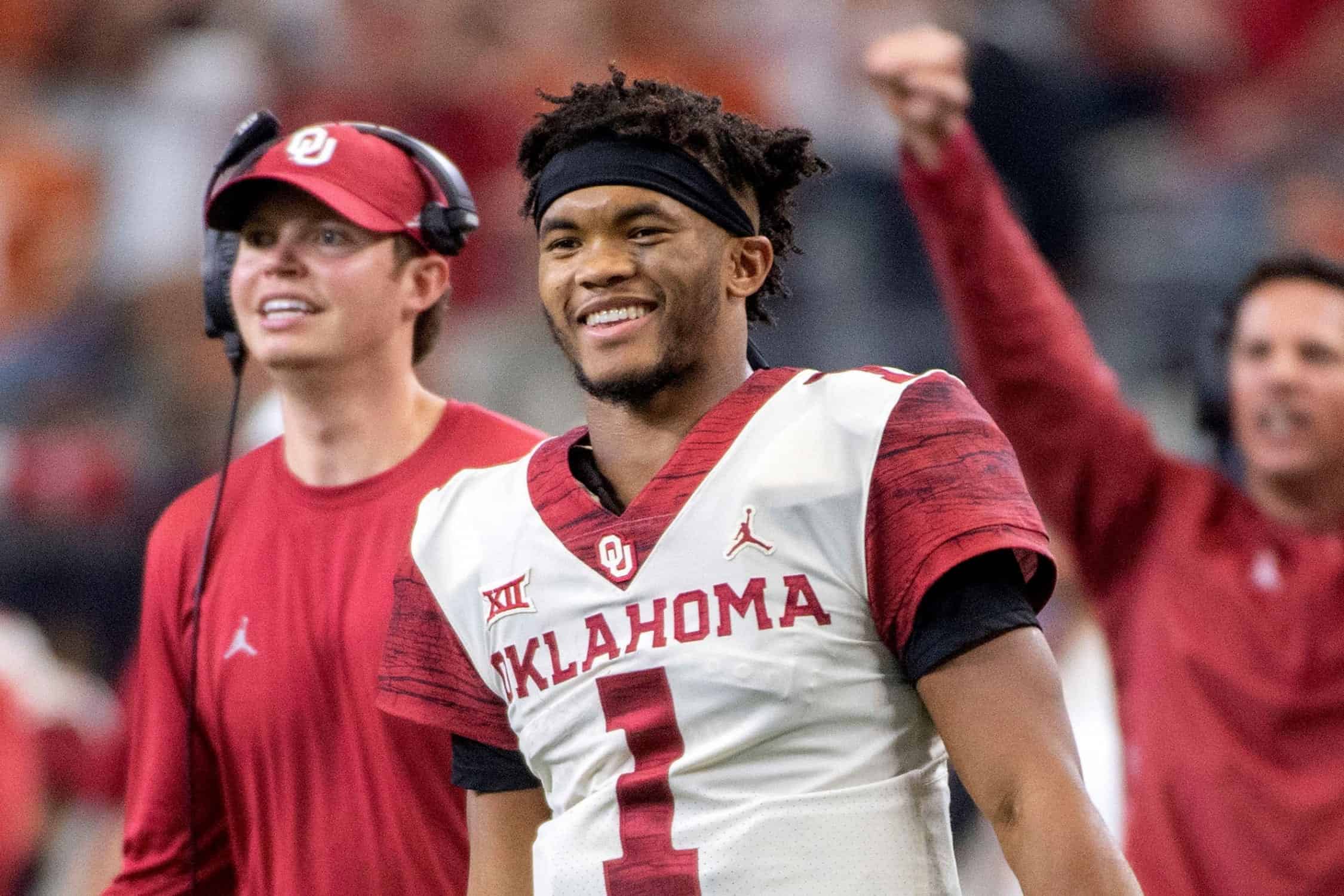 Photo Credit: New York Post
What's in this article? Click to show
As of Thursday, May 9th, 2019, number one overall pick Kyler Murray officially signed with the Arizona Cardinals. The former Heisman winner from Oklahoma signed a four-year deal worth $35,158,644 guaranteed.
IQ
Throw on the Run
Running Game
Expectations with Cardinals

As of Thursday, May 9th, 2019, number one overall pick Kyler Murray officially signed with the Arizona Cardinals. The former Heisman winner from Oklahoma signed a four-year deal worth $35,158,644 guaranteed.

Many people can argue that Kyler Murray was not the best true quarterback in the NFL Draft this year, and may have been the biggest reach of round one. Yet, with offensive linemen struggles in Arizona, he may be the best option for the rebuilding process. Kliff Kingsbury will be stepping in as the Arizona Cardinals new head coach and plans to utilize his air raid offense. Oklahoma ran an air raid offense so Murray can flourish with Kingsbury’s scheme.

Although Murray stands at 5’10” with 9 1/2″ hands and weighs 207 pounds, his playmaking ability can alter the Cardinals in a few years.

What are some of his playmaking abilities that can help the Cardinals? Murray has a great IQ (Intelligent Quotient), a strong arm that coincides with throwing on the run, and capability to turn nothing into something.

Obviously, every NFL quarterback has the intelligence to know how to read a defense and know where to place their throw. At least they should. However, it is interesting that Murray’s running game can affect his passing game tremendously. Several defenders have tendencies to take chances blitzing or commit to the run, allowing Murray to adapt to plays and passes to find a defensive weakness.

In this clip, Murray is facing Army’s defense in the red zone. He has the option to hand the ball off to the running back so he can run it through the A gap or throw a dump pass to the receiver running a slant.

Murray reads the three linebackers in the red circle. They have their eyes locked on Murray and take an aggressive first step towards stopping the run. Plus, Murray notices his receiver has inside leverage and an opening in the middle of the endzone. Instead of handing the ball off, Murray pulls the ball and places it to his receiver for a simple RPO where he passes for a touchdown.

In this clip, Murray’s slot receiver has another slant against a Cover 2 defense. Not only is Cover 2’s weakness the deep middle, but the safeties are misaligned and are wider than usual. Murray takes advantage and reads that the outside linebacker freezes while his receiver runs right by him. By that time, Murray has a wide open lane to place the ball down the middle of the field for one of his 42 touchdowns.

Overall, several defenses that have faced and will face Murray will have to worry about his running ability. But, his running abilities will open up passing lanes where Murray will be able to place throws, including deep balls and passes on the run. This is a luxury that the Cardinals simply did not have last year with Josh Rosen.

Throw on the Run

Murray’s speed and running abilities open up more passing lanes once he leaves the pocket. In Arizona, he will most definitely see QB spies, but that will cause one less defender to guard his receiving core.

Murray proved several times that he never drops his head and runs unless it is meant to be a QB draw. Murray will keep his head up and tends to throw before he opts to run. The delay on running the ball allows his receivers more time to break coverages and have defenders fall back further so Murray has more running space.

In this first clip, Murray is running a bootleg play action pass to the left. The fake handoff bootleg creates time as the offensive line draws the defense to the right side of the field. Murray can then have time to set his feet and rifles a pass to his receiver.

This play is an example of Murray always keeping his head up and downfield at all times. Murray notices the pocket crashing down so he rolls right. Three defenders begin to come down and chase Murray on a possible run attempt while Murray keeps his eyes locked on his receiver.

The receiver adapts his dig or deep in route into a deep crossing route heading towards the corner of the endzone. The receiver’s route and Murray’s throw on the run creates a wide-open pass as the defense bites for the run.

His last scrambling play shows him making something out of nothing. Murray camps in the pocket and notices nothing is open at first. Seconds later, Murray decides to use his feet to roll left and create more time.

He keeps his eyes downfield and orders his receivers to adapt their routes so someone could get open. Murray reads through each option then finally makes the choice to complete the play with a pass near the sideline.

Despite his great throws on the run, he must work on pocket sliding because he will be pressured many times. Last year, Rosen was pressured 37.2% of the time. This means Murray’s ability to throw on the run can help him make more plays than a traditional quarterback. With Arizona’s lackluster blocking, Murray may need to throw on the run more than he would like.

Lastly, all these things above work due to his running ability.

Murray finished his Heisman season with 140 rush attempts for 1,001 yards, 7.2 yards per a rush. The former Sooner is a pass-first quarterback compared to Lamar Jackson and Michael Vick. Nonetheless, Murray is right with these two when it comes to running the football.

He has the skill to utilize speed and agility in order to turn sacks to big plays. Murray can have certain plays set for him too.

In this clip, Murray has a QB draw where he acts like he will throw the ball. However, the only difference is that he will drop his head instantly and find the hole.

Murray notices the defensive tackle is out of position. He runs through what was the C gap and turns a 3rd-and-7 into a 1st-and-goal. Murray’s agility also shines on this play as he jump-cuts a tackler and earns himself a few more yards.

Although it may seem like a nuisance that Murray is a small quarterback, that means he will be harder to tackle on plays like this clip above.

In this play, Murray plans to take a shot to the endzone but realizes the defense is running a deep Cover 2 that makes it a near Cover 4 defense. Murray notes the cornerback and safety on the left side of the field as they are backed up to the goal line. Murray then runs and earns himself positive yardage after a near coverage sack occurred.

If he can carry this with him to Arizona, it will be tough for defenses to stop a dual threat Murray.

Lastly, Murray’s speed and change of direction is something that will be deadly in the NFL. In this clip, Murray notices that the defense drops into a deep coverage immediately. Instead of throwing into coverage, Murray challenges the defenders on the ground. Murray’s speed and breakthrough quickness allow him to slide down the sideline for one of his 12 rushing touchdowns.

Murray will be a more dangerous threat than Rosen in the newer Arizona Air Raid offense. With Larry Fitzgerald, Christian Kirk and two rookie receivers, Murray will start building the Cardinals back up to greatness.

Murray’s next thing he must work on is patience in the pocket. He must practice sliding in the pocket in order to help his patience. However, Murray will be creating highlight plays early with all the traits he contains already.

In this article:Featured, featured, Kyler Murray