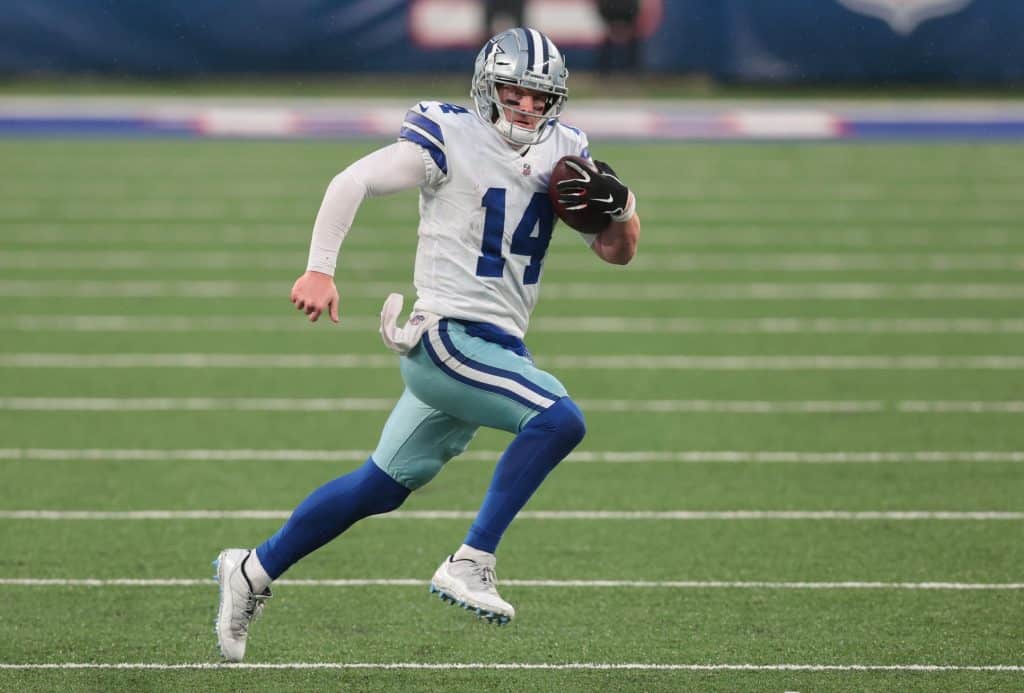 The quarterback free agency market is starting to come into focus. Ryan Fitzpatrick is on his way to Washington, and Jameis Winston is heading back to the New Orleans Saints. The Dallas Cowboys paid Dak Prescott and they’d also like to retain his backup. However, the “Red Rifle” apparently has a market of his own. Where are some landing spots for quarterback Andy Dalton in NFL free agency?

After being deposed as the Cincinnati Bengals quarterback by the arrival of first overall draft pick Joe Burrow, Dalton landed in Dallas as Prescott’s backup last year. When Prescott went down with a season-ending injury, he was serviceable in his replacement. His completion percentage (64.9%), touchdown percentage per passing play (4.2%), and interception percentage (2.4%), were all better than his final year with the Bengals.

Dalton proved with the Cowboys that he is still able to win games for an NFL team. With not too many viable quarterback options on the market, he has the opportunity to contend for the starting quarterback job somewhere other than Dallas. With that in mind, where are some landing spots for Andy Dalton in free agency?

Are the Chicago Bears destined for Andy Dalton?

If we’re considering landing spots for Andy Dalton where he can be the starter, the Chicago Bears are the obvious choice. They called time on the Mitchell Trubisky experience earlier this week by allowing him to hit free agency. Nick Foles proved last year that he isn’t capable of leading the Bears. At present, they have no other quarterback on their depth chart.

The Bears aren’t currently in an NFL Draft position where they will land one of the top quarterbacks. They’ve been burned with trading up to secure a quarterback — see Mitchell Trubisky — before so that feels unlikely. Although there’s been mention of a potential trade for Deshaun Watson, Sam Darnold, and are a preferred destination for Russell Wilson, it feels like we would have seen that move by now.

As a result, it seems highly probable that Dalton could be the starting quarterback in Chicago next year. Let’s not forget that Dalton has a connection with Bears offensive coordinator Bill Lazor.

Could the San Francisco 49ers make sense for Andy Dalton?

While the Chicago Bears represent the best landing spot for Andy Dalton in terms of starting, the San Francisco 49ers are an interesting option as well. There’s no denying that 49ers fans — if not the ownership themselves — don’t believe in Jimmy Garoppolo.

The 49ers are consistently in the conversation of selecting a quarterback in the 2021 NFL Draft. Although they have C.J. Beathard and Josh Rosen on the roster, the fact that they recently allowed backup Nick Mullens to hit free agency would suggest they plan to add to the quarterback room.

Dalton would either push Garoppolo to be better or — and this is more likely — unseat the former New England Patriots quarterback. This would allow the 49ers to use the draft to build more efficiently in the 2021 NFL Draft.

Could the Indianapolis Colts place Andy Dalton on a contender?

Does the Indianapolis Colts trade for Carson Wentz rule them out as a landing spot for Andy Dalton? No, I don’t believe it does.

The Colts are obviously banking on Wentz returning to the form he showed in leading the Philadelphia Eagles to the Super Bowl. What if it doesn’t happen though? Even worse, what if Wentz gets hurt again and they have to turn to Jacob Eason?

Putting Dalton on the Colts is the ultimate insurance policy. If Wentz goes down or plays poorly, you’ve got a ready-made starter who can win you games. The Colts should be a contender this year, and the offensive line would be better than anything that Dalton has played behind in the last two years.

While the Chicago Bears seem destined for Andy Dalton, there are a number of long-shot landing spots. The Pittsburgh Steelers recently re-signed Ben Roethlisberger, but if anything happens to “Big Ben,” is Mason Rudolph really a Super Bowl contender caliber quarterback?

The same situation applies for the New England Patriots. When Tom Brady left, Jarrett Stidham was the heir apparent, but their confidence in the former Auburn quarterback seems at an all-time low. Cam Newton is back in New England, but what if his struggles last year were exactly that — his struggles?

Finally, could Dalton provide a mentor role with the Jacksonville Jaguars? They are about to land Trevor Lawrence and have a young quarterback room with Gardner Minshew and Jake Luton. Dalton would provide some veteran leadership as the Jaguars look to overhaul their entire roster.

What is Andy Dalton’s market value in free agency?

According to Spotrac, any landing spot for Andy Dalton is looking at paying a market value of $6.8 million per year. This would presumably be on a one-year deal, similar to Jameis Winston and Cam Newton. Their market value is devised by taking an average salary from players with a similar statistical output. Interestingly — given the potential landing spots — those players include current Chicago Bears quarterback Nick Foles.