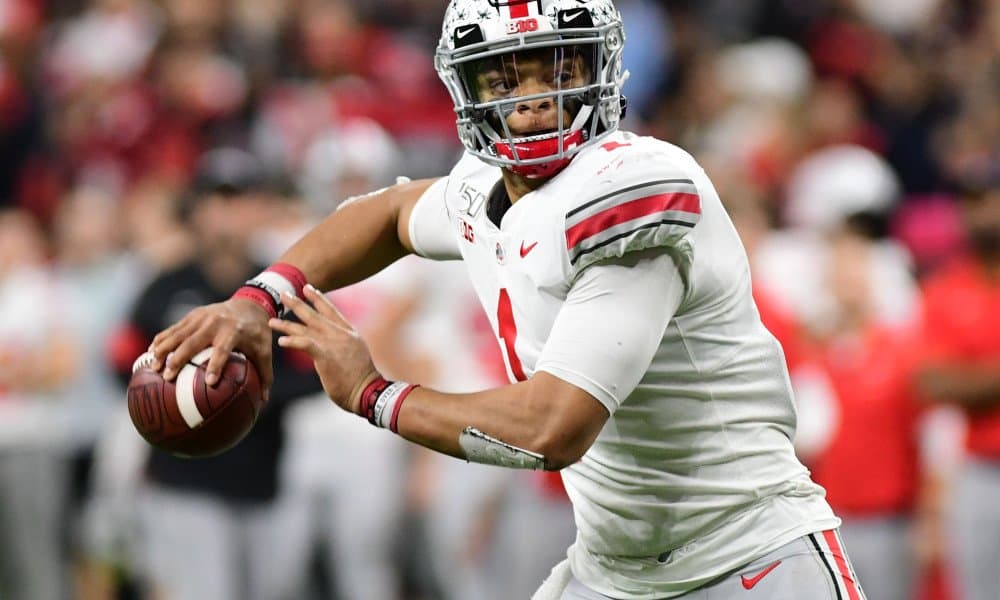 Dec 7, 2019; Indianapolis, IN, USA; Ohio State quarterback Justin Fields (1) rolls out of the pocket to throw for a touchdown in the second half against the Wisconsin Badgers in the 2019 Big Ten Championship Game at Lucas Oil Stadium. Mandatory Credit: Thomas J. Russo-USA TODAY Sports

Recently on Pro Football Network, analyst Dalton Miller published a full 2-round 2021 NFL mock draft. The Washington Football Team EST. 1932 selected players with the 2nd and 34th overall picks, based on Super Bowl odds for the upcoming season. Washington struggled last year and are operating under a completely new coaching staff, so it’s understandable that Vegas would be so low on them going into this season. With two high draft picks, who did Washington land in this 2021 NFL mock draft, and how do they fit with the team?

Who did Washington draft in Miller’s 2-round 2021 NFL mock draft?

Miller made the point that the selection of Fields isn’t due to a lack of faith in current Washington quarterback Dwayne Haskins. Instead, having the second overall pick two years in a row indicates a need for a new face of the franchise.

“I personally haven’t given up hope for Dwayne Haskins, but if the Football Team ends up picking second overall, they may just have to draft their second Ohio State QB in just three years.”

Miller also mentioned that North Dakota State quarterback Trey Lance also garnered some serious consideration for this selection. I agree with this, as Lance and Fields are in a very tight race for the QB2 spot in the 2021 NFL Draft.

I understand that Washington fans aren’t going to like this selection, as the Haskins hype train is in full swing. While both Dalton and I still have faith that Haskins can be a franchise quarterback, it’s foolish to think that if Washington is picking top five again, they won’t take a new quarterback in the first round if they find someone they really like.

Fields is an impressive physical specimen who has garnered many comparisons to Cam Newton. He’s got a rocket arm, is a punishing runner and can make plays with his legs when the pocket collapses. We already know the kind of success a player like Newton can have under Washington’s new head coach Ron Rivera. Why would Fields be any different?

Unlike the Fields selection, I struggle to find the reasoning for this pick. Cornerback will likely be one of Washington’s most pressing needs after this upcoming season. However, prospects like Asante Samuel Jr., Elijah Molden, and Jaycee Horn were still available. All who are cornerbacks I view massively higher than Stokes at this point of the process.

However, the selection of Stokes over those players wasn’t my biggest issue with this pick. My problem is the caliber of players that were drafted after Stokes. In the next six selections, the players selected were: Chris Rumph II (EDGE), Sage Surratt (WR), Trey Smith (iOL), Nick Bolton (LB), Jevon Holland (Safety), and Brevin Jordan (TE).

Outside of Rumph, all of these players represent a need for Washington, and all six are vastly higher than Stokes on my personal board, with Holland and Bolton both being top 12 players.

Stokes is an average cornerback when analyzing his size and athletic ability. He’s by no means a liability, but his game-tape doesn’t impress as much as you’d like from a player being mocked with the 34th overall pick.

Miller wrote about Stokes earlier this year, saying “He looks a bit awkward on the hoof, with a little bit of upper back arch forward, like he’s lumbering in his direction of movement.” I like Stokes tape, but I don’t believe he was the correct choice for Washington with this selection.