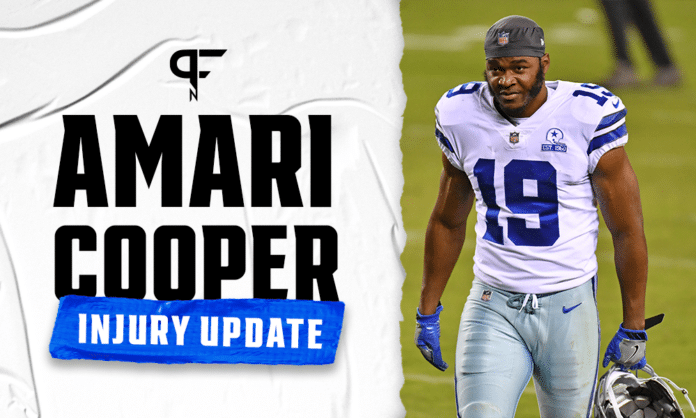 Amari Cooper Injury Update: Is ankle injury a cause for concern?

Amari Cooper's injury has mostly kept him out of training camp and preseason action. However, signs point towards him being ready in Week 1.

Dallas Cowboys wide receiver Amari Cooper has been nearly injury-free in his six NFL seasons, appearing in 93 of a possible 96 regular-season games. But there were some concerns about his Week 1 availability last month when he began training camp on the physically unable to perform list — a sign that his surgically repaired right ankle still was not 100%.

Amari Cooper’s injury concerns have faded throughout the preseason

A month later, those worries have largely gone away. He came off the PUP list on August 10, began practicing in pads on August 16, and logged 13 snaps in the Cowboys’ third preseason game.

Cooper recently said he feels “100% healthy” after dealing with some residual ankle soreness that kept him out of OTAs and minicamp. According to the Dallas Morning News, he added that he “felt good” after his preseason debut.

“I wouldn’t say I’m rusty,” Cooper explained. “I would say I haven’t played in a long time … This was my third time to have the pads on since January. Not rust. I needed to get that feel of competing before it actually matters.”

Cooper will be a big asset to Cowboys, fantasy teams in 2021

It had indeed been a very long time since he played. Seven months, in fact. Cooper was one of the few Dallas stars to survive the 2020 season in one piece. He appeared in every game, catching 92 passes for 1,114 yards and 5 touchdowns.

But Cooper — who signed a five-year, $100 million contract extension before the 2020 season — evidently got hurt in Dallas’ regular-season finale and announced his surgery just a few days later.

Dallas Cowboys wide receiver posted this on his Instagram story on Thursday.

"Surgery was a success."

With eight months before his next regular-season game, the Cowboys took it slow with the four-time Pro Bowler. Cooper did not participate in OTAs or minicamps and then got a late start to training camp.

The plan seems to have worked. There are no concerns Cooper will miss the Cowboys’ season opener against the Tampa Bay Buccaneers on September 9. And with his return to practice, he should have plenty of time to re-establish timing and chemistry with quarterback Dak Prescott, who also missed much of training camp due to a shoulder injury.