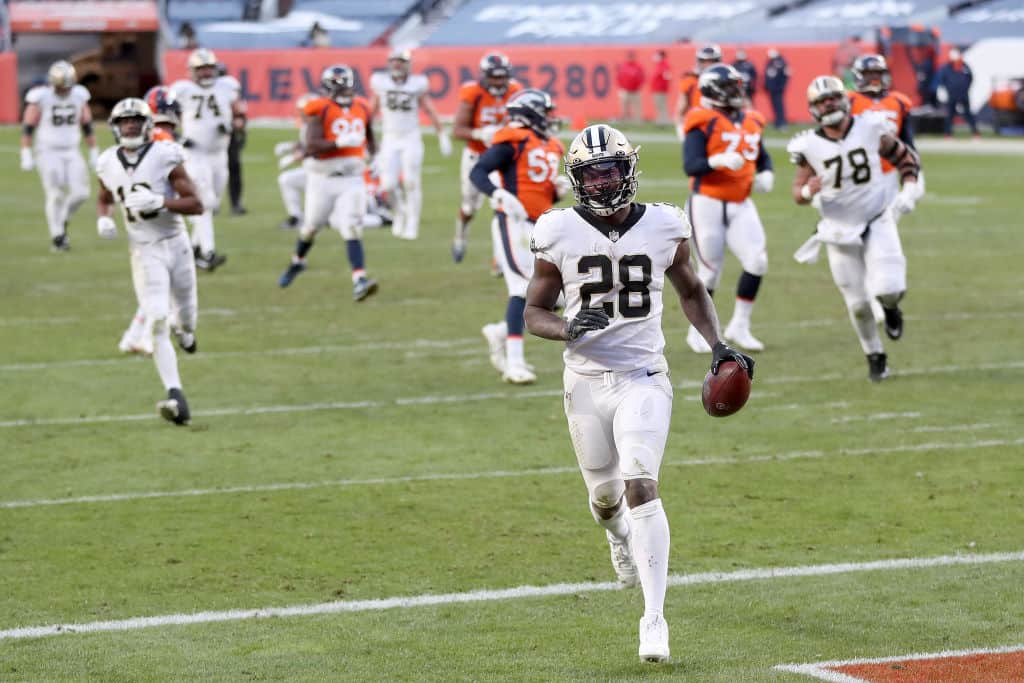 DENVER, COLORADO - NOVEMBER 29: Latavius Murray #28 of the New Orleans Saints rushes for a 36 yard touchdown during the third quarter of a game against the Denver Broncos at Empower Field At Mile High on November 29, 2020 in Denver, Colorado. ( (Photo by Matthew Stockman/Getty Images)
What's in this article? Click to show
Saints RB Alvin Kamara has been the most successful of the consensus top-four back on draft day
Saints RB Latavius Murray has been the better option to start in the last two weeks
In Week 13, who is the better Saints RB to start: Alvin Kamara or Latavius Murray?
Want more fantasy football analysis and news?

The ever-changing world of fantasy football means that your team often looks quite different at the end of the season compared to draft day. This is perfectly emphasized by the uncertainty surrounding which of the New Orleans Saints RBs, Alvin Kamara and Latavius Murray, is the right option to start in Week 13. Let’s take a look at the situation surrounding these two New Orleans Saints RBs, and which appears to be the better option to start in Week 13.

If you had a top-five draft pick this year, you only had a 20% chance of making a good choice. At the 1.01, Christian McCaffrey drafters got a glimpse of what he could be and were then teased once again, only to see him land back on the injury report.

If you had the 1.02 and took Giants RB Saquon Barkley, well, your season was over before it even got started in Week 2. It wasn’t until the 1.03 range where we start to see a percentage of decent finishes from our selection because few people were taking Alvin Kamara with the first two selections back in August. Now, if you drafted Cowboys’ RB Ezekiel Elliott over Kamara, his RB37 ranking since Week 6 has done you little good.

It’s not until we reach the 1.04 where we see the bulk of drafters taking Kamara, and likely they are the ones coming into the playoffs with the highest seeding of those four teams and feeling less confident than normal.

For most of the season, Alvin Kamara has been by far the best back in the NFL and for fantasy. Through the first 10 games this year, Kamara won you weeks on his own. He carried the ball 104 times for 486 yards and seven touchdowns while displaying his incredible ability out of the backfield, snagging 67 of his 80 targets for 648 yards and four touchdowns. In that time frame, he averaged 27.4 points per game in PPR formats. Just as a pass-catcher, Kamara would have been the WR9, 1.1 points ahead of Washington Football Team WR Terry McLaurin.

The passing game and the incredible target share is what gave Kamara all of his value. In his first three seasons, Alvin Kamara finished with exactly 81 receptions in three straight years. He had 67 in nine games and was on pace for 119 catches on 142 targets.

However, once Drew Brees suffered what amounted to 11 broken ribs and a collapsed lung, Kamara’s production as the Saints RB1 came to a halt.

Kamara has carried the ball 24 times for 99 yards and one touchdown in the last two weeks but has seen just three targets, catching one for -2 yards. This places him as the RB33 in PPR formats, averaging 8.4 fantasy points per game, a 71% drop in weekly production.

With Taysom Hill under center, we have officially reached the time where we can panic about Alvin Kamara and whether the Saints RB is someone you can even feel safe to start with any shred of confidence. There are even rumblings that maybe Latavius Murray is the better and safer option for fantasy purposes, but I don’t quite know if we are there just yet.

I still can’t believe it has come to this where we are having a real conversation about who the better Saints RB to start between Alvin Kamara and Latavius Murray, but 2020 works in mysterious ways.

Over the last two weeks, Murray has more rushing attempts (31 to 24), more rushing yards (173 to 99), more receptions (3) on the same number of targets, and has more total touchdowns than Kamara (2 to 1). Seems simple enough? Start Latavius Murray over Alvin Kamara. Well, not so fast, my friend, as I don’t think the box scores give a true sense of what is going on.

Let’s start with Week 11 when Taysom Hill got his first start under center. Honestly, this game was as close to a split between the two running backs as it gets. They both ended the day with 10.50 PPR points, were separated by one carry and four yards on the ground, with Kamara rushing 13 times for 45 yards and Murray going 12 for 49 rushing the ball. The difference was Kamara managed to score a touchdown while Murray caught three passes for 36 yards and saw a fraction more playing time in a 51/49% snap split.

What hurts both players in Week 11 was Taysom Hill and his rushing ability and the fact that they played the Falcons. They are one of the few teams bad enough on defense to allow him to be successful through the air (18 of 23 for 233) so he can get into the red zone and vulture two rushing touchdowns.

Latavius Murray had a superb fantasy outing in Week 12

Then we get to Week 12, and this is where Latavius Murray took over. Murray rushed 12 times for 124 yards and two touchdowns while adding a catch for two yards. That amounted to 24.60 fantasy points and an RB5 finish. But we need to put this information into context.

The Saints were up big in this game, and that should be no surprise knowing the Broncos were using a practice squad wide receiver as a quarterback. There was little reason to run out Alvin Kamara when it was not required, knowing that he has been nursing an injured ankle, which no one seems to be pointing out these last two weeks.

Kamara has played on less than 50% of the team’s snaps not because he has fallen in the pecking order but likely because he is not fully healthy, and the Saints have one of the best backup running backs in the NFL.

We also need to talk about familiarity. When Taysom Hill had been practicing for the first 10 weeks, who was he taking most of his reps with on the Saints’ offense? The second-team options, including Latavius Murray. Sure he has had reps with Alvin Kamara and the rest of the offense, but there is something to be said about the players who you have worked with all the time being the ones you lean on when thrust into a different situation.

In Week 13, who is the better Saints RB to start: Alvin Kamara or Latavius Murray?

I will never advocate benching Alvin Kamara, but he won’t be a top-five option in my rankings anymore. In Week 13, the Saints have a rematch against the Falcons, who they just played in Week 11 with Taysom Hill under center, and we know how this went. Kamara totaled only 45 yards on 13 carries against them just two weeks ago, though a touchdown salvaged his day from a fantasy perspective. Part of the issue is that opposing teams have tended to attack the Falcons through the air and not on the ground.

Atlanta gives up the 31st most points to quarterbacks (23.72) and wide receivers (43.02) and is dead last against the tight end position (15.77). Against running backs, they are the fourth-best in points allowed with 19.56 per game. This is due to the Falcons seeing the second-fewest attempts (196) and allowing 700 yards rushing (second-best in the NFL). Teams know that they can beat them through the air, and that’s why you’ve seen them face a league-low 17.8 carries per game. They’ve allowed just six of them to hit 11.5 PPR points this year, tied for the third-fewest in the league.

What should you do with Alvin Kamara and Latavius Murray in Week 13?

Unless Sean Payton is going to start scheming back in the underneath routes for Kamara, it’s hard to see a way he gains back his value when they are just fine letting this backfield be a split and with Taysom Hill having more rushing attempts than completions, as he did last week.

Alvin Kamara is a mid-tier RB2 even though we know the upside he brings, and Latavius Murray will slide in the RB3 range, though his pure rushing value takes a hit based on the strength of the Falcons defense. However, if he sees 12 or more carries as he has the last two weeks, then the volume is there to boost him in ranks even if Taysom Hill steals all the touchdowns.