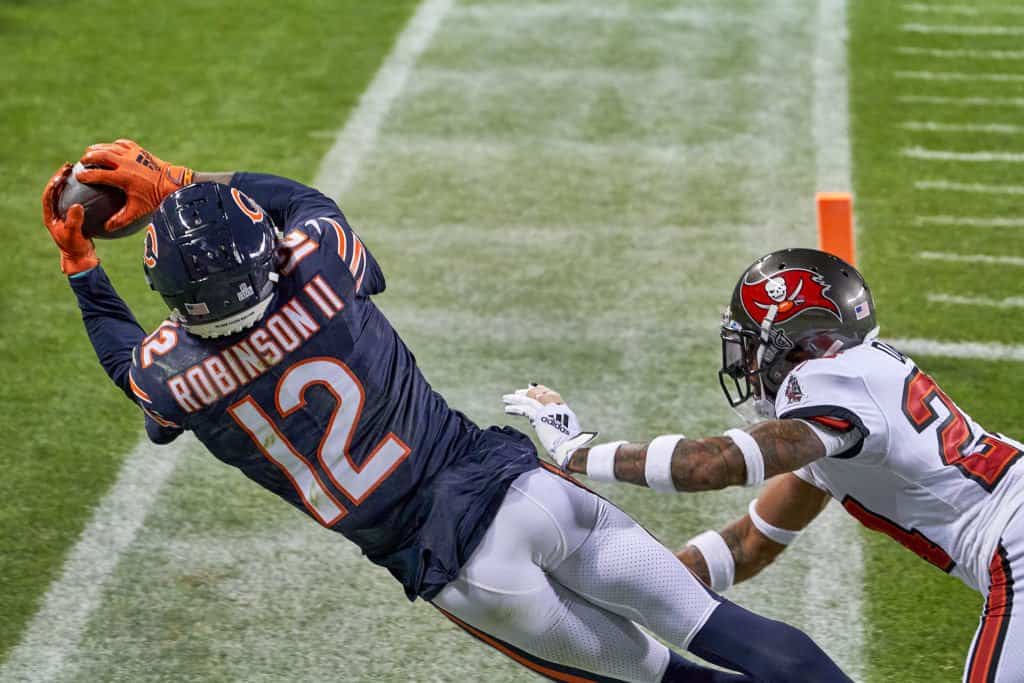 It is a great offseason for NFL teams looking to sign a wide receiver in free agency. With big names like Chris Godwin, Will Fuller, and JuJu Smith-Schuster all potentially hitting free agency, NFL front offices have a bevy of choices. Maybe the most interesting situation is that of the Chicago Bears, who are faced with a difficult choice — franchise tag star WR Allen Robinson or let him play for a new team next season?

Despite playing on an offense that switched quarterbacks multiple times during the regular season, Allen Robinson put up elite numbers in 2020. In total, he caught 102 passes for 1,250 yards and 6 touchdowns. However, those statistics don’t tell the full story of his season. To explain what I mean by that, we’ll need to look at Robinson’s Offensive Value Metric (OVM) grade.

The OVM is a grading system created by the (Bx) Movement to evaluate players based on how much they contribute to their offense’s success. If Robinson really is a great player stuck on a mediocre team, you would expect him to perform well on this metric. Unfortunately, the reality of the situation isn’t so optimistic.

Allen Robinson’s OVM grade is lower than you would expect

During the 2020 regular season, Robinson earned an overall OVM grade of 30.62. While that is his highest grade in the last five years, it still ranks below the halfway point among all qualifying wide receivers in 2020.

Of course, some of those players have dramatically different sample sizes. However, Robinson’s position on that list implies that the Bears WR was just an average contributor to his offense in 2020.

For a more explicit depiction of this fact, look at the chart below. It shows his weekly grades, represented by black dots, compared to the regular season average for wide receivers, represented by the yellow line. 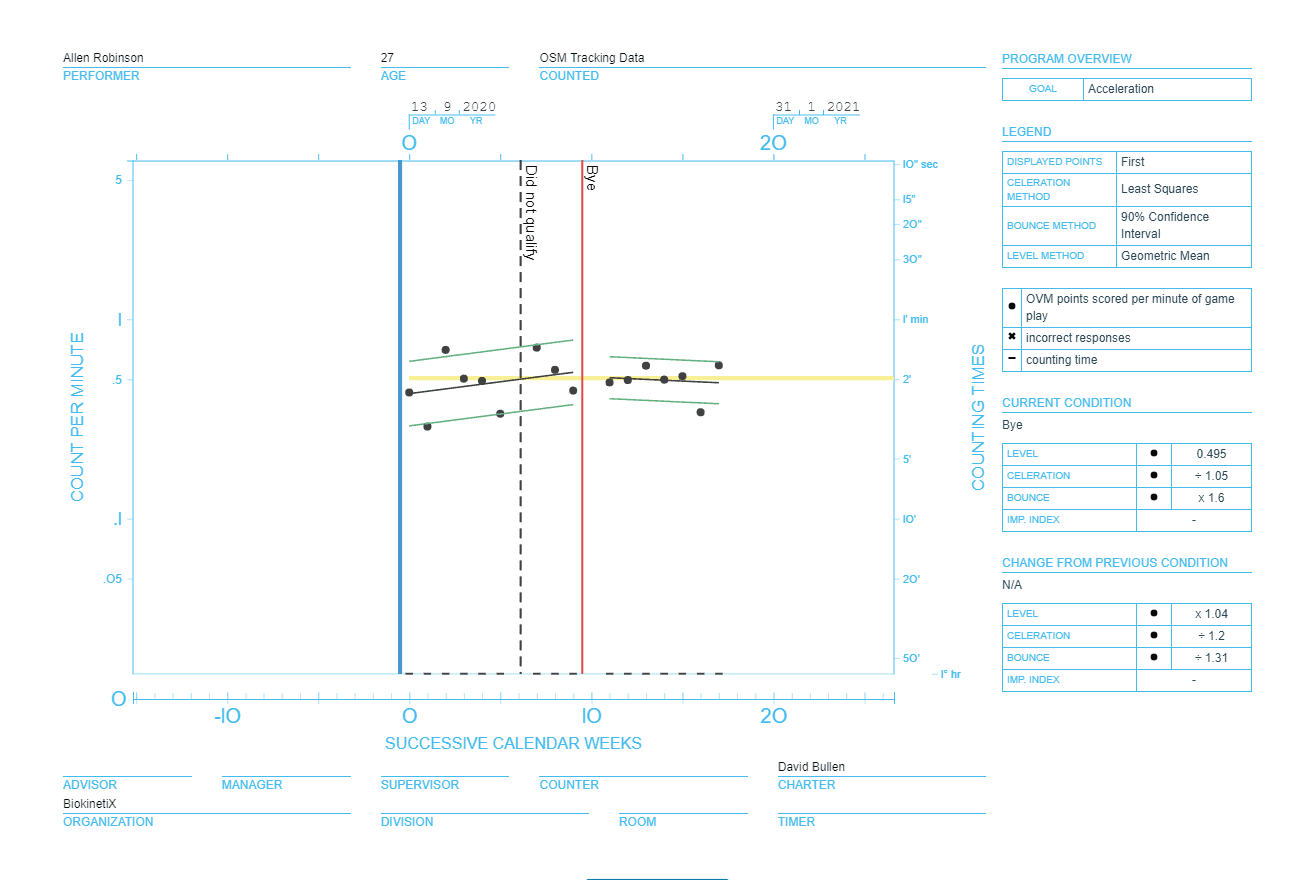 As you can see, Robinson’s weekly grades consistently stayed around the league average. For many wide receivers, this level of contribution would be fine. However, you would expect him to play a more influential role in the offense for a player as well-regarded as Robinson.

To understand why Robinson’s OVM grade is so low, we need to look at the metrics involved in calculating a wide receiver’s grade. On most of them, the Bears WR’s performance was worse than you might expect.

His catch percentage of 67.55% was only slightly above average, and he only averaged 3.6 yards after the catch, which ranked well below the halfway point among all qualifying wide receivers.

However, Robinson’s main struggle was in his inability to get open. When targeted, he was an average of 2.3 yards from the nearest defender. That average was tied with several other players for the sixth-lowest amount of separation among all qualifying wide receivers.

He was given a lower amount of cushion (5.6 yards) than the average wide receiver, in fairness to Robinson. However, that is an exceptionally low amount of separation for a top-tier WR.

Allen Robinson is talented but not perfect

Robinson is a gifted athlete who makes some spectacular plays. However, there are also some obvious flaws in his game. He doesn’t get open consistently and doesn’t catch the ball reliably. And even when he does have the ball in his hands, he doesn’t create extra yards after the catch.

All of those are crucial skills for a wide receiver. The main advantage Robinson has over most players at his position is his ability to make contested catches. However, an elite WR needs to excel in more areas than one.

All of these statistics bring us to the choice faced by the Bears this offseason — franchise tag Robinson or let him go? On the one hand, the data shows that Robinson was only providing average value last season. In fact, he wasn’t even the Bears’ highest-graded player, according to the OVM. That was Anthony Miller, with a grade of 31.75.

On the other, players can become more valuable in a different offensive setting. For example, Tom Brady’s OVM grade increased by more than 10 points when he left New England. If the Bears are planning a soft rebuild with Allen Robinson as a major piece, franchise tagging him makes sense. They could build an offense that focuses on covering up his weaknesses and allowing his athletic gifts to shine.

No matter what the Bears decide to do with their star WR, it will be interesting to see how Robinson performs next season. He is clearly a talented player, and he has had a solid career thus far despite playing on poor offenses. Maybe his best is still to come. Still, whichever team he ends up playing for will need to be aware of his limitations. 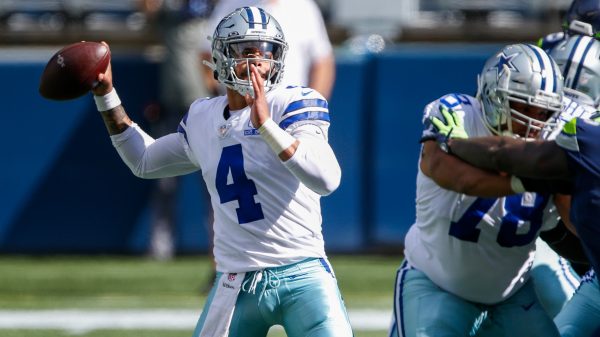 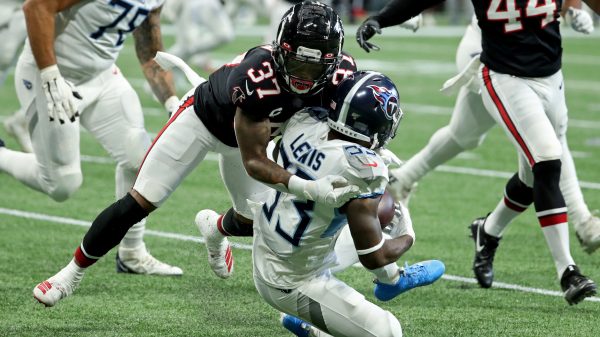