2022 4-Round NFL Mock Draft: Carson Strong, Sam Howell are the first quarterbacks off the board

The third-year breakout wide receiver is a popular concept in football circles. Can Allen Lazard be that breakout candidate in the 2020 season?

Every offseason, we pass the time talking about certain trends that have emerged over the years, and try to identify players who will be next to follow them. One of the most popular trends is the “third-year breakout wide receiver.” There are a lot of great choices to continue that trend this season. One of the most popular third-year WR breakout candidates this season is Green Bay Packers receiver Allen Lazard.

Lazard had an inauspicious start to his career after a stellar four-year college career at Iowa State. After going undrafted in the 2018 NFL Draft, Lazard was quickly signed by the Jacksonville Jaguars. Soon after training camp, Lazard was cut and stashed away on the Jaguars practice squad for most of the 2018 season. Come December of 2018, the Packers and new general manager Brian Gutekunst signed Lazard away from the Jags, and that’s when he truly began to shine.

Now, after paying his dues and working his way onto the active roster in Green Bay, Lazard is primed to burst onto the scene. He’s found himself in the good graces of Aaron Rodgers, and the Packers aren’t exactly flush with talent at the position. Lazard is a natural choice, right? Well, not so fast. Let’s take a look at what makes Lazard a breakout candidate, and what might be working against him in the 2020 NFL season.

To better understand what makes Lazard a great breakout candidate, we need to take a look at his athletic profile. Thanks to the Relative Athletic Score (RAS), developed by Kent Lee Platte, we can quantify the results of Lazard’s combine to give us a snapshot of the kind of athlete he is. 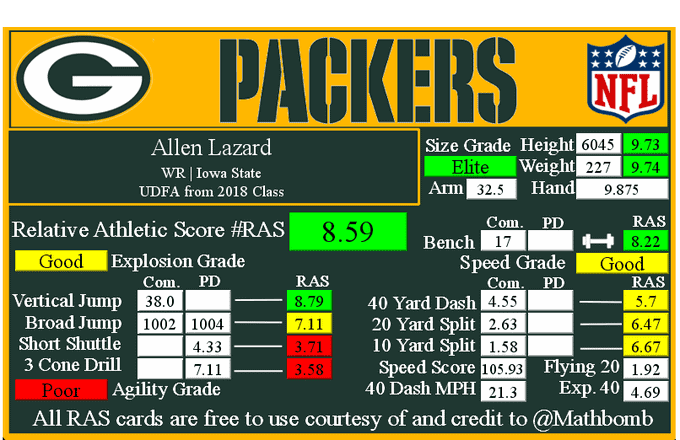 Lazard achieved an overall RAS “Elite” grade, thanks in large part to his tremendous physical stature. Lazard measured as one of the biggest and strongest wide receivers going back to 1987. His height of 6’4” and weight of 227 scored 9.73 and 9.74 respectively, while his 17 bench press reps earned him an 8.23.

Lazard pairs that incredible size with a good deal of speed and explosion, achieving “Good” grades in both categories. Where Lazard falls short is in his short-area quickness. Lazard’s agility drills were disappointing, leaving him with a “Poor” overall agility grade. All things combined, he walks away with an “Elite” grade. But being an elite athlete isn’t enough to garner success. You have to be able to put it together on the field.

For that, we turn to Brett Yarris and the PFN Offensive Share Metric, or PFN OSM. This metric has been developed to analyze a player’s individual behaviors that lead to success on the field. The things he has control of, absent everything else. This gives us a snapshot of how valuable a player may be to his offense.

While it was a struggle for Lazard to see the field early in his career, his hard work and determination have paid off for both himself and the Packers. In the 2019 NFL season, Lazard was able to achieve an overall OSM grade of 34.22. A score that places him squarely in the “Good” category, good enough to place as the 31st receiver in the league.

Lazard’s “Good” OSM grade was spearheaded by his efforts in Week 8, in which he posted the second-highest OSM grade of the week: 52.79. A grade achieved in large part due to his 100% catch percentage, and using his size and speed to notch the second-highest average separation that week.

Lazard is a great athlete, and he translates that ability to the football field. But the most significant thing working in favor of Lazard as a breakout candidate is trust. It’s clear that Lazard has put in the work, and both his teammates and head coach Matt LaFleur have clearly loved his approach. He’s earned the trust of quarterback Aaron Rodgers, who has been profuse in praise of Lazard. He’s a great teammate and an ascending player, but will it translate to a breakout?

While signs may point strongly in favor of “yes,” there are some reasons for pessimism.

While there are several indicators of success working in Lazard’s favor, it’s not a given he’ll continue to rise. While he comes into the season as one of the most prominent breakout candidates, Lazard will have some hurdles to overcome in the Packers offense if he’s going to achieve that breakout.

While the Packers offense may not look stacked on paper, there’s going to be plenty of competition for targets. Lazard has earned Rodgers’ trust, but that may not be enough to garner a significant boost in targets from last season. A healthy Davante Adams should return to the lineup in 2020. Adams missed five games in 2019, allowing guys like Lazard to step up in his absence.

Also returning to the mix is a healthy Jace Sternberger. Sternberger missed the first half of the season due to injury, and saw limited action in just seven games. Now healthy, he should see the lion’s share of the targets that went to Jimmy Graham and Marcedes Lewis last season. Then there’s free-agent acquisition and new Packers receiver Devin Funchess.

Funchess figures to be the clubhouse leader for Green Bay’s number 2 receiver opposite Adams. Throw in star running back Aaron Jones catching balls out of the backfield, and suddenly it becomes a numbers game.

How many targets will be left for Lazard? Will the Packers throw the ball around enough to support a breakout?

Rodgers finished the 2019 season with 569 passing attempts, good enough for 8th-most in the league. Even with an injured Adams last season, Lazard was only targeted on 52 of those attempts. That works out to just over a 9% target share of the Packers offense last season. Just how much can that percentage increase in light of the addition of Funchess and a healthy Davante Adams? That’s the million dollar question.

Lazard is trending in the right direction to be considered a breakout candidate in 2020. He has a solid athletic profile to support a promising 2019 campaign that gained him respect in the locker room. However, he will have to establish himself as a receiver that demands targets from Rodgers in the LaFleur offense.

Is Nick Bosa playing tonight vs. the Packers?

Is Trey Hendrickson playing today vs. the Titans?