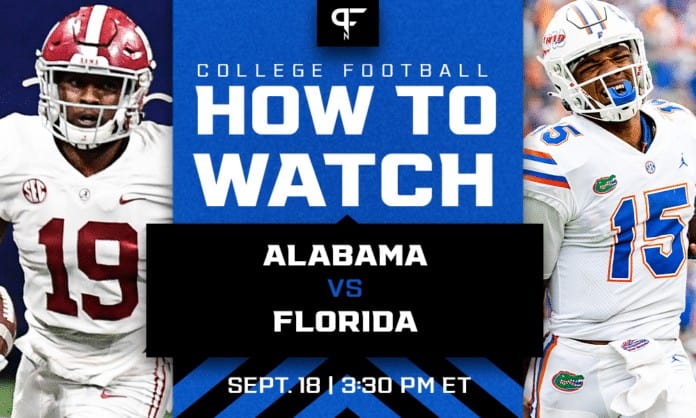 What are the Alabama vs. Florida odds and prediction, what channel is the game on, and how can you stream the Week 3 matchup?

When we last watched Alabama vs. Florida, it was a Crimson Tide victory in the 2020 SEC Championship Game. Now, they’re back facing each other once again as ranked opponents, and the stakes are just as high. Can Dan Mullen steal a game from Nick Saban? It’s a college football game you have to watch this weekend, and we’re here to help. Let’s take a look at the current odds, a prediction for the game, the TV channel, and how to live stream the Alabama vs. Florida Week 3 game.

Alabama vs. Florida odds and prediction for Week 3

Mullen’s first task is figuring out what to do with his quarterback. Emory Jones entered the season with a lot of hype but hasn’t lived up to expectations. While he hasn’t played the greatest, Jones still gives the Gators some stability and experience under center. The only problem is that fans are already growing restless with his play.

Anthony Richardson appears to have a higher ceiling than Jones and made several explosive plays last week against USF. Potentially starting him will be a highly debated topic leading up to the game, but does it give Florida the best chance to win? While the Gators sit at 2-0, beating an Alabama team at 2-0 won’t be easy. Mullen might decide to see how Jones does before making any knee-jerk changes.

Alabama hasn’t visited Ben Hill Griffin Stadium since 2011, with the last three matchups coming in the SEC Championship Game. Quarterback Bryce Young gets the first true road test of his young career, and we’ll have to wait and see if it turns into a Heisman moment. So far, he’s been shredding everyone he faces.

Arguably, the biggest matchup in this game is Florida’s offense against Alabama’s defense. Questions about Jones’ ability to move the ball against the Gators are the current issue, but the group they face is the bigger problem. The Tide’s linebackers are loaded even with the loss of Christopher Allen, and Florida better find a way to block them.

If you’re looking for a college football upset, this isn’t the one. Saban wasn’t pleased with his team’s performance against Mercer last week (a 48-14 win), so you can imagine how tough practice was this week. The Tide rolls on, and it’s probably not close.

An Alabama win appears to be the most likely outcome, but can Florida cover the spread? Last year, the Gators kept things closer than people realized, but it’s tough to compete with an Alabama dynasty. If you’re into sports betting, this might be one to stay away from if you like the Gators.

A win for the Gators would do wonders for the program. Mullen’s reputation would soar to new heights, Jones would be put back in the Heisman conversation, and there’s every reason Florida would be a top-10 team in the polls.

Alabama vs. Florida. On a Saturday. In September. Both teams ranked. What does all of this mean? You better tune in for a thrilling game.

How to watch Alabama vs. Florida this week