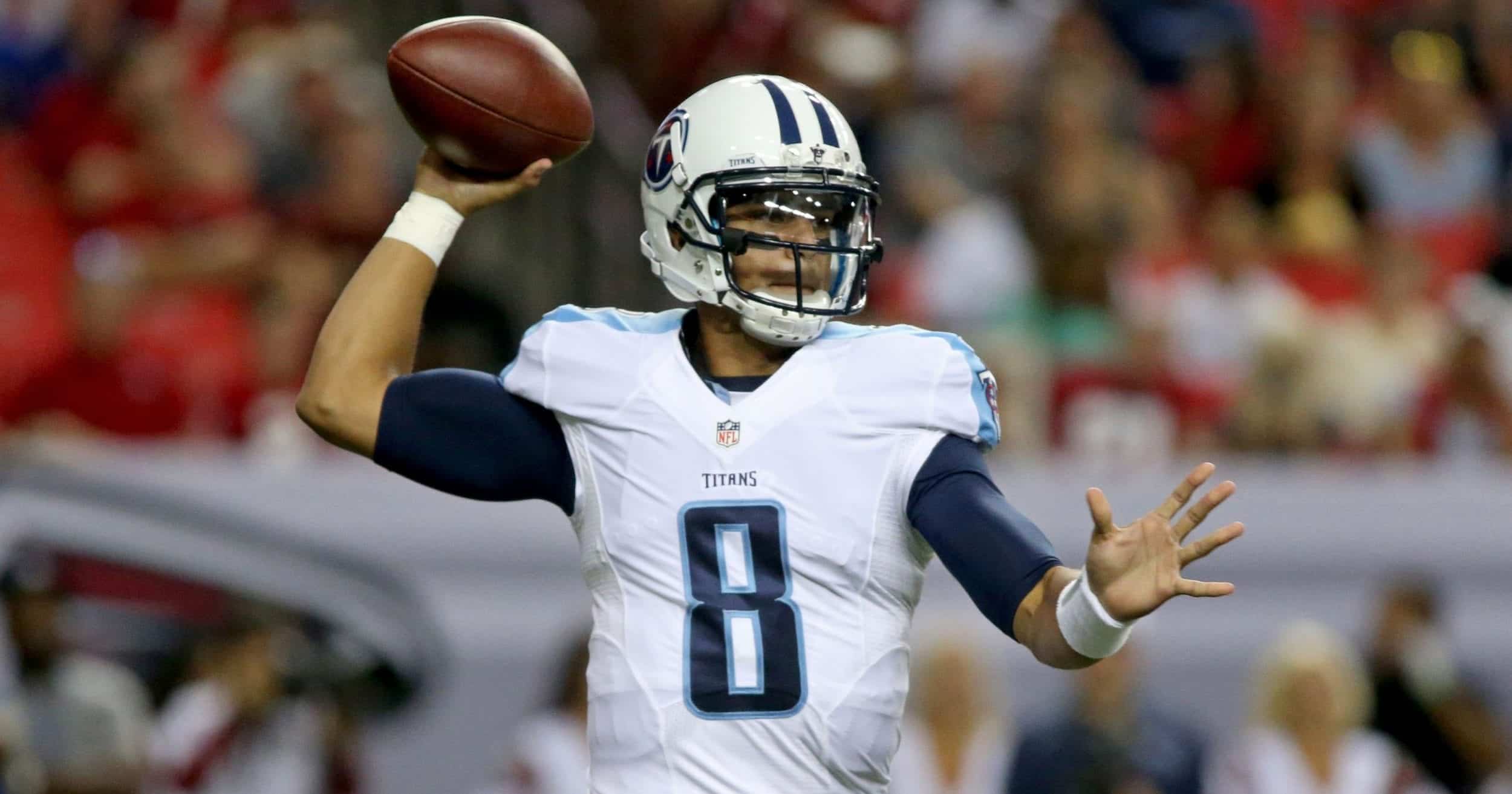 So far, the 2019 NFL season can be defined by the health of quarterbacks. No division has dealt with more fluctuation at the position than the AFC South. Because of that, the division remains wide open for the taking. Each team has flashed the ability to win the division, but each has stumbled in major moments.

It all comes down to the quarterback play going forward and how these offenses mesh. Beyond this season, the AFC South might be the most open in terms of who could be leading each franchise behind center. Outside of the Houston Texans, there’s no for sure answer at quarterback for the future and that puts the AFC South in a very unique situation.

Obviously, when it comes to the quarterback position, the Texans are laughing. They’ve found their franchise passer in Deshaun Watson and are set going forward with him. The Texans woes are more about their lack of a GM, poor offensive line play, and villainous head coach. It could be worse – they could not have a future star of the league commanding the huddle. Watson has been every bit as good as anybody could have hoped for in Houston when they took him 12th overall out of Clemson. The Texans are currently tied atop the AFC South with the Indianapolis Colts at 2-1 and the favorite to win the division.

As long as Watson can stay healthy, he’s going to be a top-10 quarterback in the league for a long time. He hasn’t missed time since tearing his ACL as a rookie, but a quarterback who takes a lot of hits behind a shaky offensive line is always at risk. Watson is one of the biggest downfield risk-takers in the league, instantly making him more exciting than the majority of NFL passers. He hasn’t even played two full seasons worth of games yet and has over 50 touchdowns while averaging over 8.0 yards per attempt. This is the exact type of quarterback built to thrive in today’s NFL.

The Texans do need to invest in a backup quarterback with the potential risk of a Watson injury. Having guys like AJ McCarron and Alex McGough just won’t cut it. It’s often said the backup quarterback is one of the most important players on the team, so why not draft one in 2020 for insurance purposes? Clearly, the Texans are in the best shape at the position in the AFC South and that doesn’t look like it will change anytime soon. Watson, along with Patrick Mahomes, looks like the future faces of the NFL.

It feels like ages ago when Andrew Luck shocked the NFL world and retired at just 29 while in his prime. Surprisingly, that was only a month ago. The division favorite Colts had no choice but to roll the dice with backup Jacoby Brissett and his 17 career starts. They gave him a two-year $30 million extension for good measure and hoped head coach Frank Reich would be able to keep the offense cooking with Brissett as the trigger man.

It’s still way too early in the season, but the Colts are tied with the Texans for the AFC South lead and have scored the most points in the division. Their bet on the beloved Brissett has paid off early in large part due to his development in Reich’s system and the strong offensive line play.

The way the rest of the Colts season plays out will have a major influence on what they do at quarterback. Through three games, Brissett has looked strong, but inconsistent at times. He’s on pace to throw for over 3,400 yards with 37 touchdowns (WOW), and just 5 interceptions. Those are good numbers and he clearly has a great grasp of Reich’s system.

Brissett might not have a massively high ceiling but he has a relatively low price tag and in limited action, he looks like a good fit in Reich’s system. He’s only 26 and this is only his second season as a starter. 2017 was a bad situation for him so it shouldn’t be held against him. Taking all that into account, Brissett might be the guy for the Colts and Reich for the next handful of years.

He’s only going to get more comfortable in this offense and if the price tag is lower than the majority of passers in the league, it makes total sense to stick with him. Reich is an offensive genius with an elite offensive line. If they continue to surround Brissett with weapons, then he’s going to reward them with wins. He’s no Deshaun Watson, but the Colts aren’t anywhere near the poor quarterback situation many expected.

The Jacksonville Jaguars are a perfect example of why NFL teams need to draft a quarterback at minimum, every two years. You never know who might click in the NFL. It’s one of the hardest positions in all of sports and one of the most difficult to evaluate. The chances they work out are so slim that teams should take as many swings as they can at the position.

The Jaguars signed Nick Foles to a highly criticized four-year $88 million contract this offseason and he broke his clavicle halfway through the first game of the season. Enter Gardner Minshew, the sixth-round rookie from Washington State known as the “Mississippi Mustache.” Minshew has been delightful and beloved by the media, and even has the Jaguars still in the division at 1-2, but is he the future? What about Foles?

The Jaguars are definitely in the weirdest spot when it comes to the quarterback position. They just paid Foles like a franchise quarterback money, but he won’t be back until at least Week 11. Meanwhile, Minshew has had as good a rookie debut as anybody ever has and has won over the fans.

Through three games, he’s on pace for over 3,600 passing yards, 27 touchdowns, and just 5 interceptions. Those are big-time numbers – the type Jaguars fans are not used to seeing from their quarterback. The rest of the season is going to be a huge test for what they do at quarterback going forward. There’s a lot of questions in Jacksonville right now not only at quarterback, but head coach and GM.

If Minshew continues to play at this level while Foles is out and has them competitive in the AFC South, then they cannot justify benching him. If the rookie begins to struggle, then it will likely be the Foles show again by the time he’s healthy. Best case scenario could be Minshew is the guy of the future while Foles gives them their best chance to win now once he’s healthy. Either way, the Jaguars are in much better quarterback shape than they have been for the last couple of years and it doesn’t look like they’ll be needing to spend another high pick on one anytime soon.

It’s hard to believe the Tennessee Titans have the worst quarterback situation in the AFC South. As recently as 2016, it looked like Marcus Mariota would develop into a franchise quarterback. Now the Titans are in their fifth year with Mariota and it’s beginning to look like it will be his last. He hasn’t gotten any better since his second season and the former second overall pick and Heisman winner could be benched for Ryan Tannehill soon.

The Titans are currently last in the AFC South and have one of the most inconsistent offenses in the league. With a playoff-caliber defense and a head coach who wants to run the ball, the Titans just need a steady hand to guide the offense, but Mariota hasn’t been that for years.

Despite putting up some strong stats through the first three weeks, Mariota has not been impressive on the field. In the Titans blowout of the Browns, a lot of his completions were schemed by offensive coordinator Arthur Smith getting playmakers in space. Since then, the Titans have lost two straight to the Colts and Jaguars and in both games, he’s missed open targets and just isn’t seeing the field well.

Corey Davis is open and ready to be a star, but Mariota isn’t capable of getting him the ball right now. Each passing week, it seems like they’re inching closer to going with Tannehill. Even though Tannehill isn’t a clearly better option, he’s more willing to take chances downfield and the Titans offense could use that. He also brings similar athleticism to the position.

Whether they go with Mariota or Tannehill the rest of the season, the quarterback is the clear issue with the team. They have the head coach in Mike Vrabel and the defense to be a contender in the AFC South. But until they find a quality passer, they won’t be doing much damage.

The 2020 NFL Draft is full of potential franchise quarterbacks and they will likely be selecting one. It feels like a foregone conclusion that Tua Tagovailoa and Justin Herbert will be going top-five and the Titans won’t be there to select them, but more passers are emerging. Could the Titans be looking at an athletic high upside quarterback like Jordan Love, a big-armed gunslinger like Jacob Eason, an accurate high IQ passer like Jake Fromm, or an ascending talent like Joe Burrow? It would be hard to fathom the Titans sticking with Mariota as things stand.