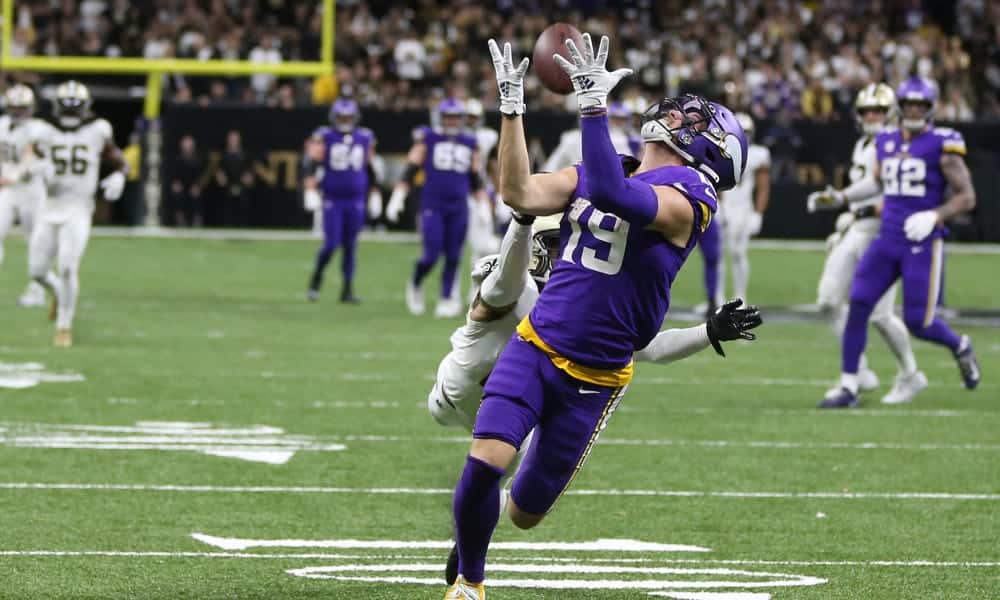 Adam Thielen was instrumental in helping the Minnesota Vikings pull off the shock of the NFL playoffs so far, and his resurgence could be the decisive factor in the postseason for a sixth seed looking to make an unlikely run to the Super Bowl.

Thielen endured the regular season severely affected by a hamstring injury. After catching only three passes for 27 yards in his Week 15 return, he went without a reception in the Vikings’ dismal 16-6 loss to the Green Bay Packers in Week 16. However, he was back to his spectacular best in the Wild Card win over the New Orleans Saints.

He caught seven of his nine targets for 127 yards, earning a Pro Football Network Offensive Share Metric (OSM) grade of 40.17.

OSM uses the NFL’s NextGen Stats and a series of algorithms to assess a player’s contribution to his offense’s production by looking at the factors only he could control. Thielen’s grade indicates an elite level of performance, which is reflected in his tape from a stellar display.

Thielen, according to NextGen Stats, accounted for 53.52 percent of the Vikings’ air yards, most of which came on a pair of deep receptions that owed much to his outstanding ball tracking. He provided a glimpse of what was to come in that regard on a 13-yard reception in the second quarter, which set up a Dalvin Cook touchdown.

He repeated the feat in the third quarter on a stunning 34-yard reception that again set up Cook for a score, adjusting brilliantly to a slightly overthrown ball from Cousins.

The crowning play of the day from Thielen, however, came in overtime. Cousins delivered what many believe to be the best throw of his career. Cousins and Thielen demonstrated excellent communication on a 43-yard strike that put the Vikings in position for the game-winning touchdown. Cousins intentionally put the pass out in front of Thielen, who intelligently made a late adjustment to his route to bring in the ball.

Thielen did almost all his damage against the Saints’ top cornerback, Marshon Lattimore. That is an extremely encouraging sign for the Vikings as they now prepare to face the San Francisco 49ers, whose corners play sides rather than traveling.

As a result, Thielen can expect to see plenty of Ahkello Witherspoon as well as Richard Sherman, and, if he is healthy and at his best, he can be confident of exploiting the former matchup.

Health continues to be an issue for Thielen, who was added to the Vikings’ injury report on Wednesday with an ankle injury. That will be of significant concern for the Vikings, as his potential absence would substantially hit Minnesota’s hopes of another shock at San Francisco.

In New Orleans, Thielen demonstrated just how critical he is to the Minnesota offense. The 49ers possess the best defense the Vikings will face in the remainder of the playoffs, and, for Minnesota to take advantage of the few holes it has, Thielen has to be on the field and in a condition to repeat his Superdome spectacular.