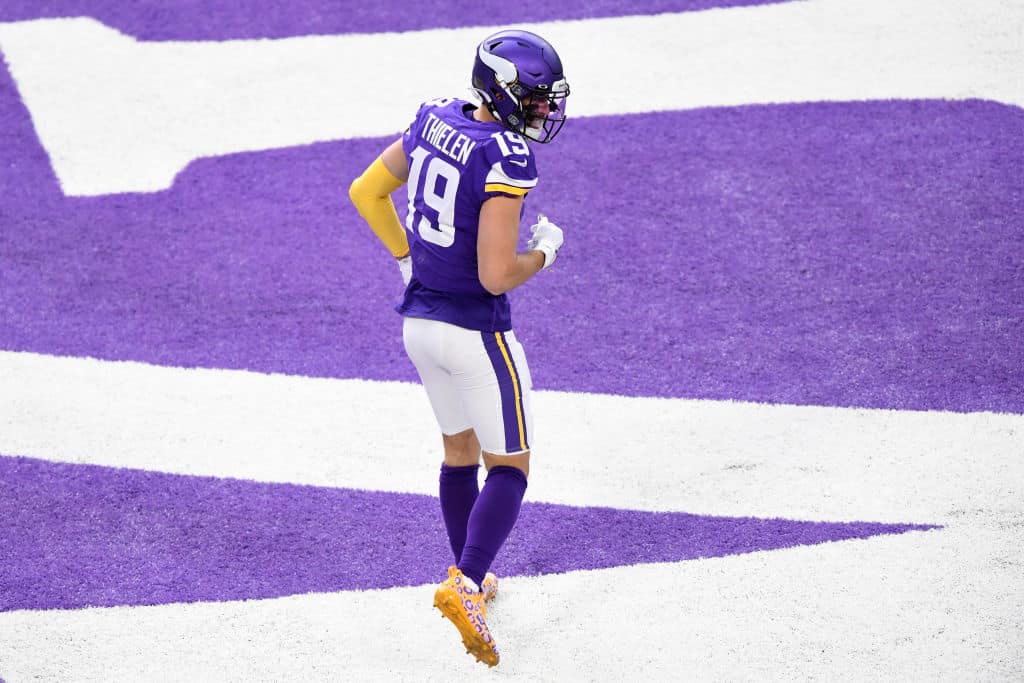 MINNEAPOLIS, MINNESOTA - DECEMBER 20: Adam Thielen #19 of the Minnesota Vikings celebrates after scoring a first quarter touchdown against the Chicago Bears at U.S. Bank Stadium on December 20, 2020 in Minneapolis, Minnesota. (Photo by Hannah Foslien/Getty Images)
What's in this article? Click to show
Adam Thielen’s TD salvaged his Week 15 fantasy performance
Justin Jefferson has been the WR1 for the Vikings
Adam Thielen should have several opportunities to produce for fantasy in Week 16
Want more fantasy football analysis and news?

After back-to-back underwhelming performances, fantasy football managers are left wondering if Vikings wide receiver Adam Thielen is still a safe start in Week 16. With fantasy championships on the line, every point matters. Can Adam Thielen bounce back to his WR1 form in Week 16, just in time for you to hoist the hardware?

Adam Thielen caught two of three targets for 11 yards and a touchdown in the Vikings’ 33-27 loss to the Bears on Sunday.

Thielen would have had a second consecutive disappointing outing had it not been for his three-yard touchdown grab late in the first quarter. Granted, he ended the day as WR50 in PPR (9.1 points), so it’s not to say he didn’t hurt you. The TD kept him from absolutely crushing your semifinals, though.

He certainly has not made it easy on fantasy managers in the playoffs. In the last eight games, he has surpassed 51 yards only twice. Also, in Week 14, he scored 6.9 PPR points and was the WR65.

Thielen is having a career season scoring the ball

Thielen scored his 13th touchdown as he added another score to his career-best season. Though his receptions and yardage have been less than encouraging in 2020, his double-digit touchdowns have rewarded fantasy managers and buoyed his value all year.

Out of Minnesota’s league-leading 34 red zone touchdowns, Thielen has accounted for 13 of them. Between himself and running back Dalvin Cook, they have 26 of the team’s total.

He has done all of this while playing with the best receiver in this year’s rookie class, Justin Jefferson.

Justin Jefferson has been the WR1 for the Vikings

Yes, Adam Thielen has the TDs. He leads the NFL in red zone target percentage and is a top-10 WR in fantasy. Want to know who is the WR6 right now? Justin Jefferson.

The rookie out of LSU has put on a clinic this season. He has already established himself as one of the best deep threats in the NFL in only 14 games. On Sunday, Jefferson surpassed Moss’ team record for catches by a rookie.

His 103 targets and 73 receptions are not only the best for his team, but they lead all rookies. Jefferson would have a clean sweep on the season if not for the Steelers’ Chase Claypool, besting his seven TDs with eight of his own.

Week 15 was Jefferson’s sixth 100-yard game of the season. This broke the Vikings’ single-season rookie record held by Randy Moss in 1998. If Justin Jefferson can produce 195 receiving yards in the next two games, he can set the all-time rookie record for the NFL. Arizona Cardinals rookie WR Anquan Boldin holds the record with his 1,377 yard total set in 2003.

Week 16 is not an easy test for the Minnesota Vikings as they take on the New Orleans Saints. There are two problems. The first problem: the Vikings may not have much to play for to close the season. Sunday’s loss all but eliminated them from playoff contention. The second problem: the Saints defense is a stellar unit. Both of these factors could limit Adam Thielen’s fantasy production in Week 16. However, let’s look at the silver lining with the Week 16 matchup.

The Vikings could limit touches for Cook

Let’s start with the motivational factor. It’s hard to see a reason for the Vikings to keep using Dalvin Cook as a battering ram with nothing on the line. In 13 games this year, Cook has a massive touch count of 339 in 2020. That’s just one less than Derrick Henry, and we would be joking ourselves if we said they’re built the same.

I will not be surprised to see the offense focus less on the rushing game or even a split in carries and use Alexander Mattison. Because of this, I don’t think they find a bunch of success. The Saints are the number two defense in the NFL in rushing yards allowed to RBs and fantasy points to running backs at 17.84 per game.

If they deviate from the typical offense and struggle to rush the ball, this will force the offense to lean on both Jefferson and Adam Thielen.

New Orleans defensive “soft spot” is though the air

The Saints give up 159.07 yards per game to WRs and are 10th in fantasy points allowed to WRs at 34.71. It’s a massive improvement, but it’s better than the alternative and saves the hits on Cook.

The Vikings will play both receivers over the field as neither tends to stay on one half or the other. Thielen plays in the slot 26% of the time, left 27%, and right 43%. If he is on the right half of the formation, he will see Marshon Lattimore. His alignment is somewhat sticky, playing on the right half 73% of his snaps. Lattimore allows a 62% catch rate (41 of 66) and 0.35 fantasy points per route covered.

I expect Adam Thielen to go back to his 8-11 target range and be a high-end WR2 in Week 16 for fantasy. If you made it this far, he could do just enough to help bring home the big prize.