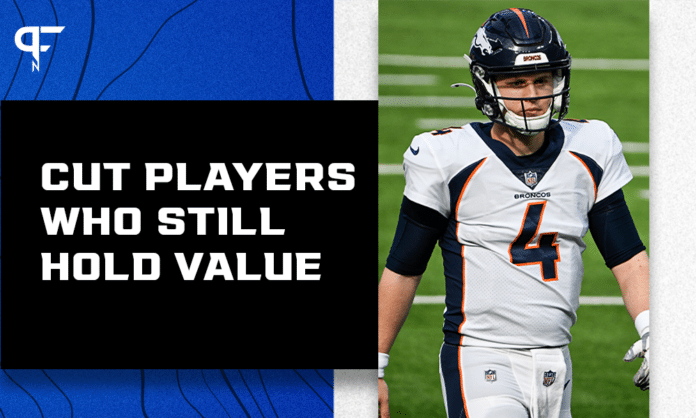 Once highly touted players in the NFL Draft circles, which recently cut players could still make an impact on different teams?

It happens every single year. Once coveted in online NFL Draft circles, players end up being drafted late or go undrafted, then are subsequently cut before 53-man rosters are finalized. Many of these players flashed incredible talents at one point in their college careers. What went wrong, and can their issues be sorted out enough to contribute on a roster elsewhere or in the future? This may take some imagination, but we’ll get there together. Be sure to check out all of the players cut through our NFL cuts tracker.

These players could provide depth as backups, and one could start on a few NFL teams.

I shall never quit Brett Rypien for as long as I shall live. Many will find players on this list they stood on a draft table for. Rypien is mine. NFL Network national correspondent James Palmer said the Broncos think very highly of Rypien, who filled in and won a Week 4 matchup against the New York Jets in 2020.

Rypien is an old-school pocket passer. Tack on that he lacks arm strength, and you’re looking at a limited player. However, certain offensive minds could use him well enough to see results as a backup. He’s a quick processor with good accuracy.

Broncos insider Troy Renck said he’s a “bright, tireless worker” and tremendous to have in the QB room. But with the Broncos only keeping two quarterbacks, Rypien didn’t fit on the active roster.

He was a seventh-round pick in the 2020 NFL Draft. The 6’2″, 210-pound receiver was a height/weight/speed threat at the University of Florida, and that type of player can have a role as a fourth or fifth receiver on a team.

He got a bit unlucky with the talent in Denver. Courtland Sutton, Jerry Jeudy, KJ Hamler, and Tim Patrick all contribute to the team in a big way. He could sneak back onto the practice squad, but a few teams out there (like the Detroit Lions) could use his services.

Williams is a bit like Cleveland, but his testing speed and game speed never matched. Additionally, his inability to move laterally hurts his overall ability as a route runner. Williams won with his length, strength, and leaping ability.

He’s shown explosion in short areas and acceleration, but his footwork needs an overhaul. Still, 6’3″, 210 pounds with over an 81-inch wingspan could help a team that lacks depth looking to stash a player for a year or two.

He has arms that go on for days and five years of experience in the NFL. He’s a solid option for a team looking for depth on the offensive interior. This was a bit surprising, considering Skura has played over 3,300 offensive snaps in the past four seasons for the Baltimore Ravens.

As a rookie, he played over 700 snaps at right guard before transitioning over to center. This makes him a swing interior lineman candidate. He won’t be free for long.

We’re swinging for the fences with these defensive picks. All three are rookies. Two went undrafted, and one was a seventh-round pick. But all three provide some upside in their specific roles.

This defensive tackle might very well be the most disappointing draft prospect from the 2021 NFL Draft class. It’s close between him and Dylan Moses. Both were highly touted high school recruits that flashed elite traits early in their college careers.

Wilson was thought of as a potential first-round pick heading into the 2020 college season. Yet, a knee injury zapped his explosion, and he could no longer anchor against double teams. He rarely flashed the quick first step he once possessed, but many thought it was still in there somewhere.

He tried playing at the Senior Bowl, but he injured himself and missed the rest of the week. His medicals must be a problem, and his game certainly was. Regardless, he’s worth a shot on the practice squad in hopes of developing him into a fraction of what we once thought he could be.

Scott is a trash can full of dirt, as retired and crusty scout Bryan Broaddus would say. Scott is everything you’d want in a gap-plugging nose tackle, in theory. However, the Vikings suddenly found themselves with some depth on the interior, and they no longer needed his services.

There are teams out there looking for bodies on the defensive interior. Scott has freakish length for his shorter frame, making his natural leverage a strength. We recently saw the same with undrafted Texas defensive tackle Poona Ford, who is now handsomely paid for his contribution to the Seahawks.

I’m not saying Scott will be Ford, but a team could bring him in on the cheap and hope.

Man, the flashes in his game before his ACL tear were fun. Wiggins is still an outstanding athlete who should land on his feet with the Cardinals’ practice squad or elsewhere. His physical profile will keep him around the league. At just under 6’0″ and weighing in at nearly 210 pounds, Wiggins has the size of a do-it-all NFL safety.

He also runs in the low 4.4 range with good explosive numbers to boot. Wiggins just never looked completely comfortable after his injury. Hopefully, he gets back into a groove because everything is there to be molded into a contributor in the NFL.