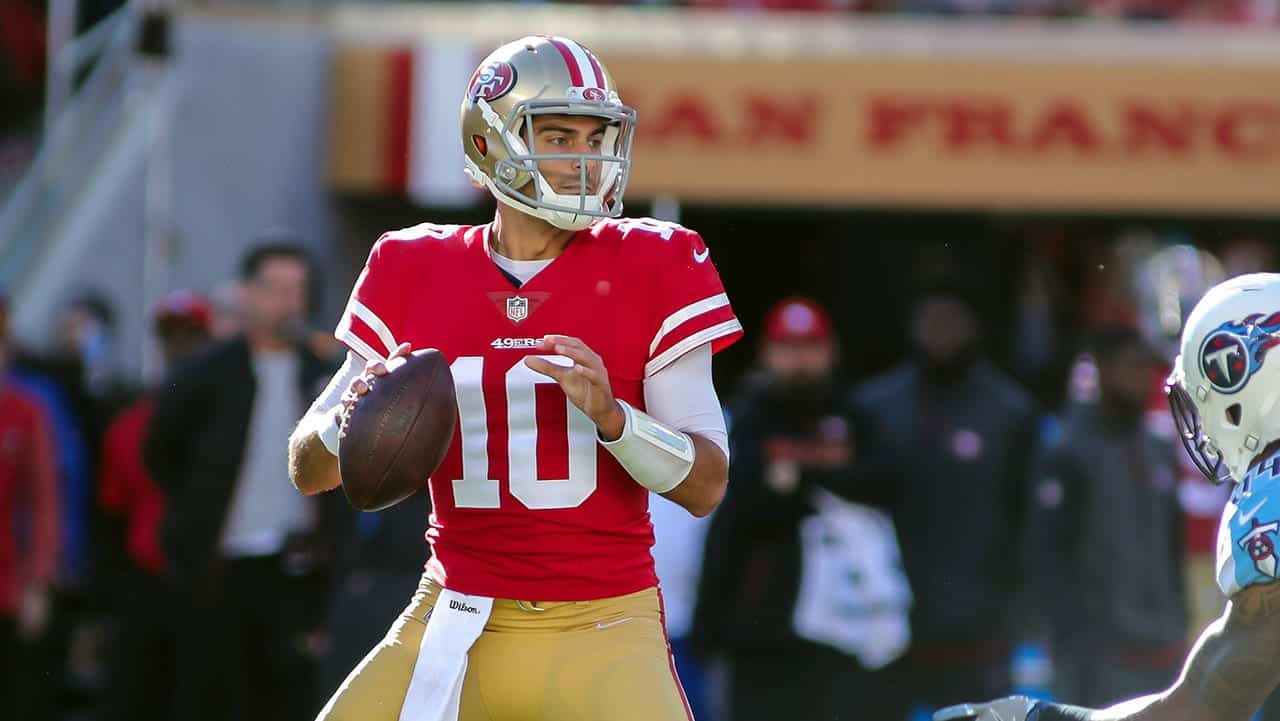 Photo Credit: Sergio Estrada-USA TODAY Sports
What's in this article? Click to show
The San Francisco 49ers had a lot of hype entering the 2018 season. But, a season-ending injury to quarterback Jimmy Garoppolo ended their playoff hopes. Headed into 2019, what moves can the 49ers make to once again hoist Lombardi’s trophy?
Free Agency and 2019 NFL Draft
What to expect

The San Francisco 49ers had a lot of hype entering the 2018 season. But, a season-ending injury to quarterback Jimmy Garoppolo ended their playoff hopes. Headed into 2019, what moves can the 49ers make to once again hoist Lombardi’s trophy?

While it may have been premature, some expected the San Francisco 49ers to make a giant leap in 2018 off the heels of “Garoppolo-mania” at the end of 2017. However, Garoppolo went down with a season-ending injury in Week 3 against the Kansas City Chiefs. With that injury, the 49ers’ playoff hopes also came crashing down. However, there are still some positives to take away, especially on the offensive side of the ball. Let’s take a look at some key stats and rankings.

Losing Garoppolo forced San Francisco to start C.J. Beathard for five games. According to Pro Football Network’s exclusive Offensive Share Metric, only Blake Bortles graded worse than Beathard who finished with a 15.04 grade. Undrafted rookie Nick Mullens stepped in and was a substantial upgrade over Beathard. Mullens checked in with a grade of 22.7 in OSM. Even more impressive was his yards per attempt, finishing at 8.3. This is right in line with the Los Angeles Rams season-long average. That said, the fate of the 49ers 2019 season rests solely on the health of Garoppolo, and whether or not he can be the $27.5 million QB the 49ers signed him to be.

The 49ers have young talent along the defensive line between DeForest Buckner (23/112 in Pro Football Focus’ interior defenders grades), Arik Armstead (26/103 among EDGE defenders), and Solomon Thomas (63/103). The linebacker corps needs to be upgraded along with the secondary. They graded better than I expected according to PFF. However, that doesn’t excuse the fact that the team had just two interceptions on the year, so a play-maker on the back-end would be a huge boost to this unit.

It will be up to the front office to bring in an impact player in the secondary and defensive coordinator Robert Saleh to groom the young talent they have on the defensive line. Saleh has left a lot to be desired in terms of scheme and defensive game plans. Just go back and look at the film. In a Monday night football game against the New York Giants, the 49ers defense actually left Odell Beckham uncovered pre-snap on the goal line. I’m not sure how you don’t emphasize Beckham in that scenario. I would not be surprised at all if Saleh is canned as early as mid-season if the defense doesn’t show improvement.

Listed below, are the 49ers impending free agents with their PFF ranking in parenthesis. No ranking means they did not qualify.

The biggest name the 49ers are linked to this offseason is disgruntled Pittsburgh Steelers WR,  Antonio Brown. They have already decided not to pick up Garcon’s option and while Dante Pettis showed some promise as a rookie, they need to upgrade the position. San Francisco has picks in each of the first four rounds, so as long as the Steelers aren’t asking for a haul of draft picks, they could conceivably trade for Brown.

Beckham Jr. has also been brought up in trade talks this offseason.  According to Pro Football Talk’s Chris Simms, the New England Patriots reportedly tried to trade for him before the 2018 trade deadline.

Chris Simms reports on @PFT_Live that the Giants almost traded OBJ during the season…to the Patriots 👀 pic.twitter.com/kzctxYwmo3

UPI’s Alex Butler also has San Francisco as a potential suitor for Beckham if the Giants do decide to trade him. It could be argued the younger Beckham should be the preferred target over Brown. But his hefty contract would most likely have to be restructured upon arriving in San Francisco. That said, I expect the 49ers to pursue both in some capacity this offseason.

Despite the offensive line’s low ranking in adjusted sack rate, I would expect them to keep the unit intact by potentially franchising Michael Person and drafting some depth in April.

Drafting 2nd overall has the 49ers in an advantageous situation in that they are guaranteed their choice of at least one of Quinnen Williams or Nick Bosa. I highly doubt they give up the 2nd overall pick for either of the above mentioned WR’s, so they can stay put and land one of the top two prospects in this year’s draft. Given the draft capital spent the last few years on the defensive front and their draft position, I doubt they pursue anyone in free agency.

If they end up keeping their 2nd round pick and opt to choose Williams or Bosa 2nd overall, this would be the right spot to target the linebacker they so desperately need. Both Notre Dame’s Te’Von Coney and Alabama’s Mack Wilson figure to be available in this range. And I think San Francisco needs to pull the trigger if either player is available at 34th overall.

If they decide they are content with their current defensive line talent and put the onus on Robert Saleh and the coaching staff’s shoulder to develop the players already in place, trading down from #2 overall to a spot where they could still land LSU’s Devin White could also be in order. I prefer the first option of keeping both picks, but if they have to relinquish their second rounder to obtain Brown or Beckham, this is a route that should be explored.

NBC Sports Matt Maiocco writes Richard Sherman has said he would pitch playing in San Francisco to former teammate Earl Thomas, which could give the 49ers a leg up on signing the three-time all-pro. Whether it is Thomas, Landon Collins (New York Giants) or HaHa Clinton-Dix (Washington), they need to find a playmaker on the back end. for a secondary who mustered just two interceptions last season.

Ultimately the season hinges on the health and level of play from Jimmy Garoppolo. He needs to live up to the $27.5-million contract the 49ers signed him to in 2018. Upgrades also need to be made on the defensive side of the ball. Fortunately, the 49ers have the tools to make that happen and if both things come to fruition, San Francisco is a real dark horse Super Bowl candidate for 2019.

In this article:Antonio Brown, Jimmy Garoppolo